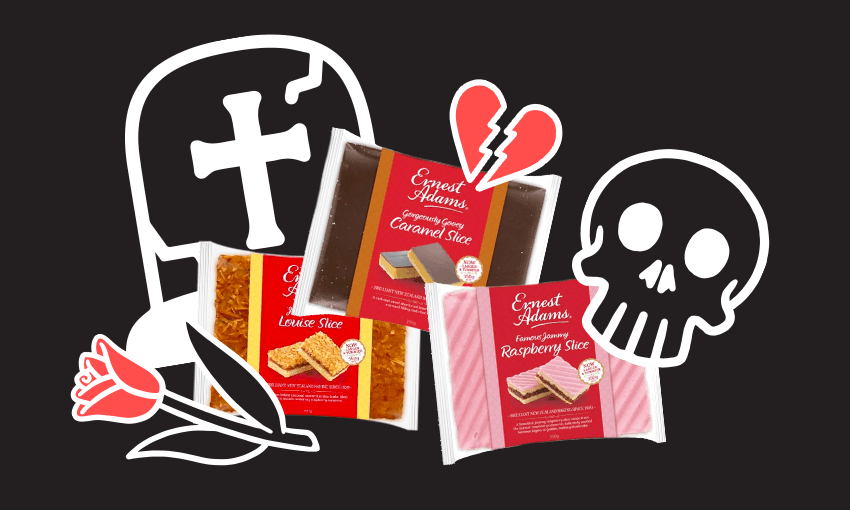 A mainstay of morning teas and bring a plate situations has been unceremoniously ‘deleted’ by the manufacturer. Alex Casey investigates the sudden disappearance of Ernest Adams products from our shelves.

Pauline Dicker has packed a sliver of Ernest Adams’ finest inside her husband’s smoko box for more than 20 years. Whether it’s the fruit loaf or the madeira cake, she’s never strayed from the trusty supermarket staple. “My husband is a blue collar worker, a shearer, a fencer, a truck driver – but it goes back for generations,” she explains of her relationship with Ernest Adams. “At the grandparents’ for special occasions, it was always the raspberry slice.”

But in recent weeks, Dicker has been searching in earnest for Ernest. “I was cruising the supermarkets looking for Ernest Adams in all the normal places that it used to be, and it was just not there,” she says forlornly. The Dunedin resident’s first assumption was that perhaps it was a supply chain thing – maybe the South Island had missed out on the latest batch. She drove to New World. She drove to Countdown. She checked online.

“They have just disappeared.”

Ernest Alfred Adams was born in England in 1892, the son of a master baker. He emigrated to Melbourne in 1912 then moved to Christchurch in 1921 and partnered up with an elderly baker named Hugh Bruce to open Albert Bruce Ltd. By 1930, the bakeries had spread to Auckland, Wellington and Dunedin, adopting the name Ernest Adams Ltd after Hugh Bruce retired. According to Te Ara, Ernest Adams thrived through its “uncompromising commitment to quality at an affordable price” and extensive radio and newspaper advertising.

For decades, Ernest Adams has been many New Zealanders’ go-to slice for shared lunches, unexpected visitors and other important social gatherings. “They’ve been a really big part of our life,” says Dicker. “These slices have been an integral part of births, deaths, marriages – if you were coming home after a funeral, you’d be guaranteed to have some Ernest Adams slice there for you.”

Despite the place it holds in the hearts of many New Zealanders, things haven’t always been so sweet for Ernest Adams. In 2000, after years of poor financial performance and amid much internal tension, the company was sold to Hong Kong/Singapore-based bread behemoth Goodman Fielder, which owns other familiar New Zealand brands like Edmonds, Meadow Fresh, Molenberg and Vogel’s. More recently, Google reviews of Ernest Adams products appear to have turned downhill, with customers leaving increasingly negative reviews of the brand:

“Cherry Fruit Cake… Wheres the cherries… only found 2.5 in the whole cake… disappointing”

“They are disgusting. Dry as an old bone and tasteless. They have cut out some of their ingredients obviously like the FRUIT and the FLAVOR!! Leaving it like a week old scone.”

“The chocolate chip cookies gave a terrible experience and to be blunt they caused me diarrhea and I only had 4 cookies just 4. I thought it was a something else at the time but I bought them again and the same problem occurred not twice but three times”

As a loyal customer, Dicker hasn’t noticed a change in quality over the years, and remains primarily concerned with the products’ recent absence. “What are nanas going to do when it’s ‘bring a plate’ because they can’t bake any more and can’t be bothered?” she asks. “I know it’s just basically like a slab that they’ve thrown some fruit in, but it made my husband happy.”

When asked if she would consider baking herself, Dicker reveals a deeper political motivation behind her allegiance to Ernest Adams. “I’m of a generation that worked really hard to avoid having to do that sort of thing. I’m in my early 60s, we grew up after the feminists with the ‘girls can choose to do anything’ thing. And that’s one of the choices I’ve made: to not be a baker.” She’s recently purchased some mixed fruit, but admits to feeling “angst” about attempting a fruit loaf. “I’m just not sure whether I want to go there.”

Goodman Fielder did not respond to multiple requests for comment by The Spinoff about the whereabouts of the slices. Ernest Adams is no longer listed as one of the company’s brands on its website, and the listed phone number for the Ernest Adams factory in Palmerston North repeatedly rang through to voicemail. A representative from Foodstuffs told The Spinoff that the supplier had made the decision to discontinue the Ernest Adams baked treats. Yesterday, a Goodman Fielder customer service representative confirmed to Stuff the line had been “deleted”.

A devastated Dicker in Dunedin has been left scrambling for a replacement sweet treat for the smoko box. “I can’t turn to another brand because there’s not really a replacement that has what I look for.” She shudders as she recounts recently buying Countdown bakery muffins and banana bread. “It doesn’t last well in the tin, it goes off within a couple of days and it also doesn’t freeze well. But the Ernest Adams fruit loaf, well, that would last in your tin for weeks.”

Just like The Spinoff, Dicker has made her own inquiries with Goodman Fielder, but has had no response from them about the demise of her beloved products. “When there’s bring in a plate, what is it now? What is it for us?” she laments.

“It’s just another piece of history that’s been quietly lost.”