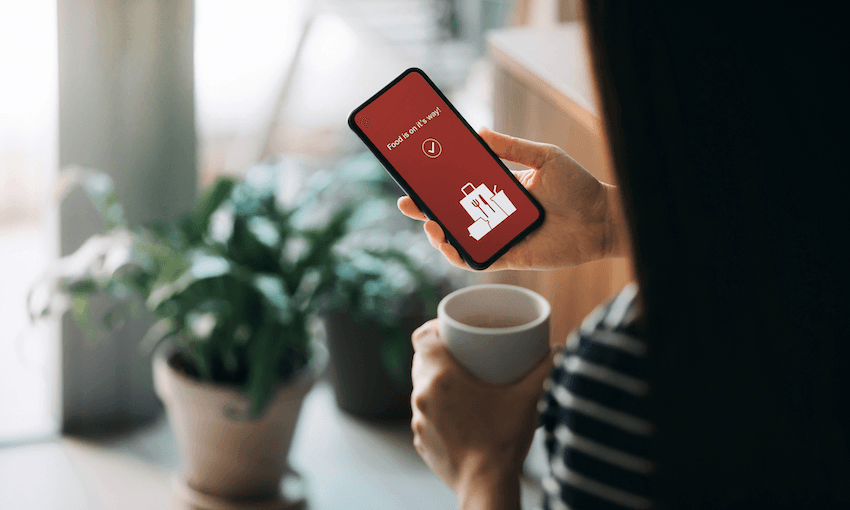 What’s the deal with takeaways under alert level three?

Praise all that is good and holy, hospitality businesses are allowed to reopen next week – with a bunch of restrictions. Here’s what you need to know.

Takeaways are back on next week, right? Thank god, I’m sick of cooking.

Yes, New Zealand is moving down from alert level four to alert level three at 11.59pm on Monday, April 27. That means retail and hospitality businesses can open, but only for delivery, drive-through or contactless pre-ordered pick-up – customers cannot enter stores or consume food and drink on site.

So what you’re saying is I can get a midnight snack on Uber Eats on Monday night?

Sadly no. Uber Eats will be back up and running at 10am on Tuesday, April 28 in the cities in which it has operated previously: Auckland, Hamilton, Tauranga, Wellington, Christchurch and Dunedin. Of course, it’ll be up to individual eateries using the platform if and when they choose to reopen. Contactless delivery will be the default setting, and there’s a new function that allows you to tip the eatery you’re ordering from.

I keep seeing stuff about how I shouldn’t use Uber Eats because it takes a massive cut from businesses. What’s the deal?

Yep, the standard commission fee is 35%, though bigger companies get a lower rate. Uber Eats has declined to lower its rate in response to the devastating impact Covid-19 has had on the hospitality sector. Yesterday, the prime minister advised New Zealanders to support local business and choose eateries that have their own delivery service where possible.

I do like the convenience of an app though. Are there other app options?

Indeed there are. Delivery-wise, there’s Sydney-based Menulog, which is owned by British company Just Eat. Menulog announced yesterday that for local restaurants using the platform, it was halving its commission rate from 14% to 7% until June 1. Menulog differs from Uber Eats in that eateries using the platform provide their own drivers. A press release from the company yesterday (April 22) said it was working with restaurants to help them to redeploy existing employees as delivery drivers. It’ll be back online from 7am on Tuesday.

For pick-up, many cafes and restaurants are using apps like Foodprint, originally a food rescue app that paired customers with eateries with surplus food, and Regulr. Both are New Zealand-owned and their respective founders told Stuff they’d seen a surge in hospitality businesses signing up since the alert level shift was announced.

Restaurant search platform Zomato has just announced it’s adding a takeaway function to its app, which will provide Auckland businesses with an order and payment platform (there’s no delivery option). It will take no commission for the first two months and 5% thereafter, and so far 320 eateries have signed up.

Other businesses are setting up their own online ordering systems, and/or taking phone orders, and some are doing delivery too. Keep an eye on the social media of your favourite joints to see what they’re up to. If you’re after some high-brow takeout, Sid Sahrawat’s trio of Auckland restaurants Sidart, Sid at The French Cafe and Cassia are doing delivery via Flamingo scooter. Another scooter company, Beam, is providing free e-scooters to restaurants and cafes in Auckland and Christchurch to help them make deliveries during level three. The first eatery to sign up was Bar Celeste on K Road, which is calling its level three takeaway arm Cantine. “This will really help us to easily redeploy our staff for central city deliveries, and to have some fun while doing it,” said owner Emma Ogilvie.

There’s also a new delivery service called Eat Local NZ launching on Tuesday, charging 5% commission. More than 100 businesses around the country have signed up so far, according to its social media posts. Plus, in Wellington, a bunch of businesses have joined forces to offer an ordering and delivery service under the name the Pandemic Pack. There are a whole lot more cool places doing cool stuff too – keep an eye on The Spinoff for a forthcoming comprehensive listicle.

How does pick-up work if I can’t go into the joint?

The government’s business site has some info on this: your order could be left on a table outside for you, perhaps, or it could be brought out to your car “in a way that avoids contact” – individual businesses will figure out what works best. Postal Service cafe in Grey Lynn, Auckland, will be taking orders on Foodprint, for example, and doing contactless handovers through a serving window, “very much like a drive-through”, as its Instagram post says. (They’re doing free coffee for essential workers too!) Speaking of drive-through, businesses are allowed to establish temporary drive-through facilities only where appropriate and must institute public health requirements such as “physical distancing, only accepting contactless payment methods wherever possible, and contact tracing”.

Do these food places have to take any special precautions? How do I know someone hasn’t coughed on my KFC wicked wings? Am I gonna catch the rona from that rendang?

Before reopening at level three, all businesses must have a Covid-19 safety plan that is shared with workers. It should focus on the importance of the usual safeguards: frequent hand washing and disinfecting of surfaces, cough and sneeze etiquette and making sure sick people stay home. Many of the 2,300 establishments that belong to the Restaurant Association will be basing their processes on the contactless delivery plan it developed in consultation with the government.

According to business.govt.nz, as a workplace is a controlled environment, two-metre physical distancing doesn’t have to be implemented because risks can be managed in other ways, such as instituting “engineering controls such as screens or personal protective equipment such as masks or gloves” to allow smaller safe distances. Somewhat confusingly, however, in the government’s golden rules for businesses at alert level three the advice is “if you didn’t use PPE in your business before Covid-19, you don’t need it now”.

Can I pay in cash?

If you must, but… why would you? The official guidelines to businesses say cash can be accepted if there’s no alternative, but “you should try to handle the cash using self-checkout kiosks or clean your hands well after handling”.

What should my first celebratory level three meal be?

Only you can decide that, my friend. But some places are already accepting orders so the excitement can begin RIGHT NOW.