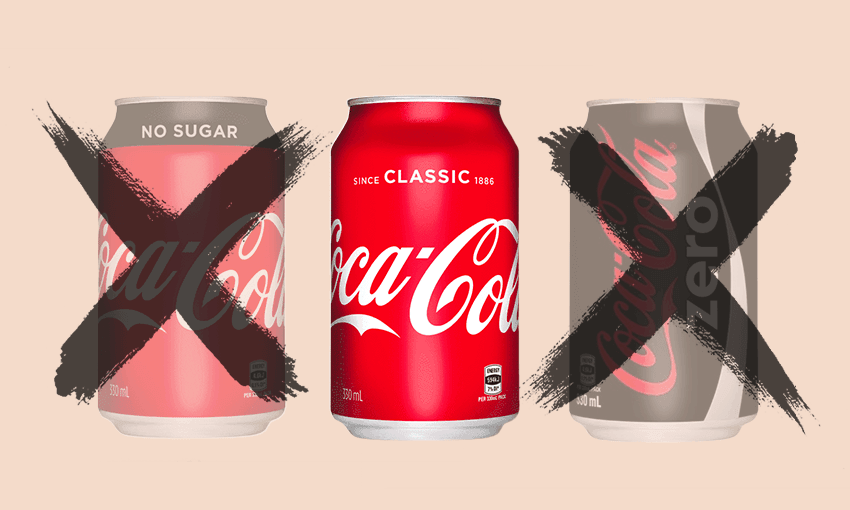 Farewell, Coke Zero and No Sugar. I won’t miss you. (Image: Archi Banal)

Farewell, Coke Zero and No Sugar. I won’t miss you. (Image: Archi Banal)

A lot of stories have been published about Coca-Cola this week. Here’s another.

Nestled among headlines about the prime minister’s trip to the US, the ongoing war in Ukraine, and the aftermath of the budget, one topic has dominated the conversation this week in the news media. Less a water cooler topic, more a vending machine debate. It’s all about Coca-Cola.

While here at The Spinoff we’ve declared this week Street Week in honour of Shortland Street’s 30th anniversary, the NZ Herald has been enjoying an impromptu themed week of its own: Coke Week. It’s published no less than four articles about the fizzy beverage over the past four days, each of which has in turn popped up on Newstalk ZB, while write-offs have appeared across other media outlets.

It started over the weekend with “Coca-Cola announces major change to iconic plastic drinks bottles.” “Iconic” seems like a stretch here, as does “major change”, but sure. That piece was quickly followed by “’This is soda-pressing’: Kiwis rage against new Coke bottles.” Then came the real shock. “Fans in a fizz: Coke prepares to ditch two flavours,” proclaimed the Herald on Tuesday. And then the kicker: “New Coke product revealed after old favourites ditched.”

That was yesterday. A fifth consecutive article has yet to materialise today, but I have faith. If it’s a republish of this one, so be it.

The gist of the news is that Coke Zero and Coke No Sugar are set to be discontinued, and replaced with a new product imaginatively called Coke Zero Sugar. It’s yet to hit our shelves so I can’t say for sure how it’ll taste, but I can imagine, and it’s not good. I’m getting notes of sweetener, mixed with tinges of mysterious chemicals, along with an aftertaste that I imagine is comparable to drinking dishwater. Like Pepsi, but somehow worse.

A lot of people seem to be in mourning at the news Zero and No Sugar being scrapped, but not me. In fact, I’m toasting the news by raising a glass of a far superior drink. It’s called Coca-Cola. As in, the original and undoubtedly best Coke on offer, in much the same way green V is still the only good V and Pineapple Lumps are still the best lump.

If you’re among those upset about Coke Zero being pulled from the shelves, I strongly suggest giving regular Coke another go. You might see the error of your ways and come to realise it’s a source of pure joy, nectar from the gods, a perfect drink. Or you might come to realise the full-bodied flavour profile is too advanced for your palate, and that’s absolutely fine as well. Diet Coke is still being made.

Whatever you do, don’t mourn for Coke Zero. Because Coke Zero Sugar is just around the corner, and it’s going to be just as gross.