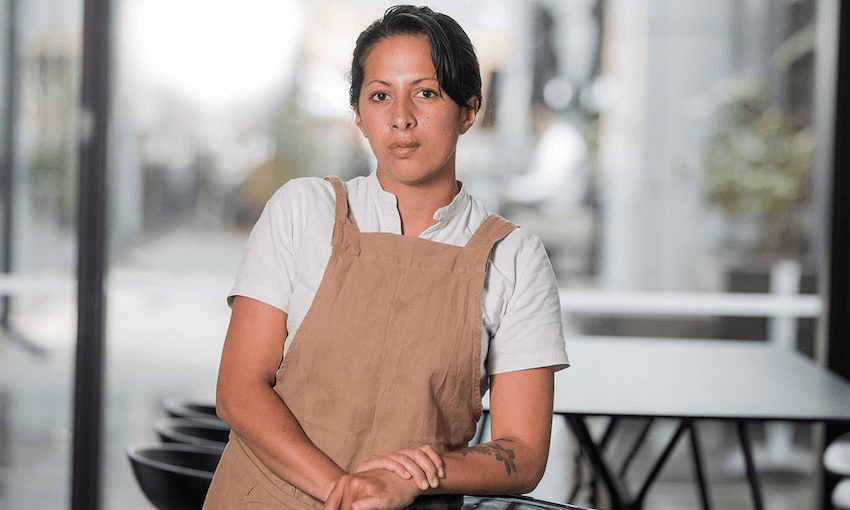 No-nonsense 31-year-old Māori/Samoan woman Monique Fiso is behind one of the most anticipated restaurant openings in years. Get ready, Wellington.

This is food the likes of which New Zealand has never seen — innovative, sophisticated, thoroughly modern cooking with indigenous ingredients at its heart. And soon, these dishes (or at least versions thereof) will be available to Wellington diners (well, apart from the weka, unless there’s a law change, anyway — read on for more on that).

Chef Monique Fiso (Ngā Rauru, Ngāti Ruanui, Samoa) has spent the past few months researching and developing the menu for Hiakai, her soon-to-open restaurant in the city-fringe suburb of Mt Cook. It’s a progression of the Hiakai hāngī pop-ups she’s been holding, to high acclaim, for the past few years.

“I really wanted the restaurant not to be just a copy of the pop-up,” Fiso says. “This is the next level — taking something that was already pretty well received and just going like there,” she adds, gesturing above her head.

Now 31, Fiso began Hiakai (it means hungry in te reo) after returning home in 2016 from seven years in some of New York’s top kitchens, latterly as sous chef to fellow Kiwi Matt Lambert at Michelin-starred The Musket Room.

Fiso grew up in Porirua with a Samoan father and a Māori/Pākehā mother. Her mum wasn’t close to her Māori family, so the kids grew up far more in touch with their Samoan side. After spending much of her 20s overseas, Fiso felt the need to reconnect with her indigenous roots, and couldn’t understand why there wasn’t more of a focus on Māori ingredients and cooking traditions in New Zealand restaurants.

Pop-ups are a dime a dozen these days, but the term doesn’t come close to covering the all-round ‘experience’ Hiakai offered — or the sheer amount of work involved. From weaving flax food baskets to putting up the bell tents that acted as dining rooms in various remote locations to digging the pit, it was all Fiso. And the food was something else — think rēwena bread with tītī fat butter, oyster with karamu berries, kūmara gnocchi with huhu grub sauce, kamokamo cappelletti and hāngī steamed pudding with kānga wai (fermented corn) creme anglaise.

While she won’t be digging pits on the regular any more, “there are still a lot of elements of earth cookery” at the restaurant, Fiso explains. She doesn’t want to give too much away, but says open-fire cookery will feature and “there are a lot of toys in the kitchen”. The newly installed chef counter was christened with the making of horopito and kawakawa chocolates to be served to the Duke and Duchess of Sussex, aka Harry and Meghan, at Government House.

“That was a reason why we couldn’t really have this restaurant right in downtown Wellington — because of the stuff we wanted to do,” she says. “Also I didn’t want it to be in the city. I wanted it to be its own thing, have its own vibe.”

Fiso and her team have been in the premises — a historic building on Wallace St, opposite Massey University, complete with two lime kilns that date back to its time as a brick-making business in the 1860s — for several months, getting ready to launch. “I’m not going to rush opening, even though I feel the pressure to,” she said back in August. “Because I know what I want it to be and what I want it to achieve and if it’s not that…” she trails off. “It’s just going to take time.”

She has been working closely with chef Joe McLeod (Tūhoe), researching indigenous plants to be used on the menu and connecting with iwi across the country to ensure a steady supply of these little-known ingredients.

“It’s kind of intimidating sometimes,” she says, “because Joe has been working with them his whole life, and will show up with his foraging bag and start laying out like 20 different plants.

“With everything else that’s going on in your brain, it’s a little overwhelming — like where do we even start?”

While the likes of kawakawa and horopito have been making (small) inroads into mainstream Kiwi cuisine for a few years now, Fiso is taking it up a notch, experimenting with plants like kareao (supplejack), tī kōuka (cabbage tree) shoots and buds, tawa bark and kiekie flowers.

But it’s not just plants she’s been playing with. Fiso has developed a relationship with Roger Beattie, a Canterbury weka enthusiast who has run foul (or fowl, as it were) of DOC for trying to farm the stocky native woodhens, which he argues would save them from extinction. “I knew we wouldn’t get it over the line just with Roger being like ‘we should eat weka’ — we needed examples of weka being used,” Fiso explains.

“So I get this call, like ‘can you come down to Air New Zealand cargo, there’s a package for you’. And it’s all these weka birds. I was like ‘right, so now what do I do…’”

They had come from the Chatham Islands — the only place it’s legal to hunt weka. And what she did was get to work, of course. “It was quite interesting because I thought the bird would be like duck or tītī [muttonbird], but the skin is really thick, and it’s got this massive fat cap on it, so you can take the skin off as if you’re taking it off a pork belly and you’ll be left with a cap of fat, and it’s really tasty.”

“We certainly need to convince a few more people that it’s totally cool, but I can see where they get nervous about it because if they say ‘yeah, it’s sweet’, then people might be like, ‘let’s go shoot one!’

“I had a few people commenting that on my Instagram and I was like ‘no, no, no… I didn’t want to be responsible for that.”

Hiakai the restaurant will open its doors in November — the exact date is yet to be confirmed. Opening Wednesday to Saturday, the 30-seater will offer one sitting of set-menu dining per night, with five- and eight-course options. The wine list has been put together by Master Sommelier Cameron Douglas and intriguing drinks matches are in the works — think horopito white whisky with peated golden ale foam made from Yeastie Boys’ Rex Attitude.

Asked how the food will differ to her pop-ups, Fiso says, “I feel that the food is much more complex and there’s a lot more finesse in what we’re doing now, because we’ve got the time and the space and we’re not shifting things around like with pop-up to pop-up, so we can do things that are much more technical and complicated that we weren’t able to do before. So that’s quite exciting.”

Opening their first restaurant would be enough to keep most young chefs busy, but Fiso is not one to shy away from multitasking. It’s recently been announced that she’s one of 24 chefs from around the world competing in a new Netflix culinary competition show, The Final Table, plus she’s working on a book about Māori food and is featuring in an exhibition at Auckland museum MOTAT called ‘The Innovators’. In the same week the Netflix show and the exhibition were announced, Fiso picked up a “Future Food Legend” gong at the Cuisine Good Food Awards.

No pressure, then. Fiso has been open about suffering from depression and anxiety, but you don’t survive seven years in some of New York’s best kitchens without some serious mental toughness. She calls a spade a spade and doesn’t shy away from calling out perceived injustices — sexism, particularly — in the industry. “A few people have been like, ‘Oh, you shouldn’t do that, it’s not good for your brand,” she says. “And I’m like, ‘Why would it not be good for my brand standing up for women? Isn’t that the whole point? When you have a voice you’re supposed to use it. I’m not going to just sit there.”

It’s safe to say that “just sitting there” is not a concept Fiso is familiar with.