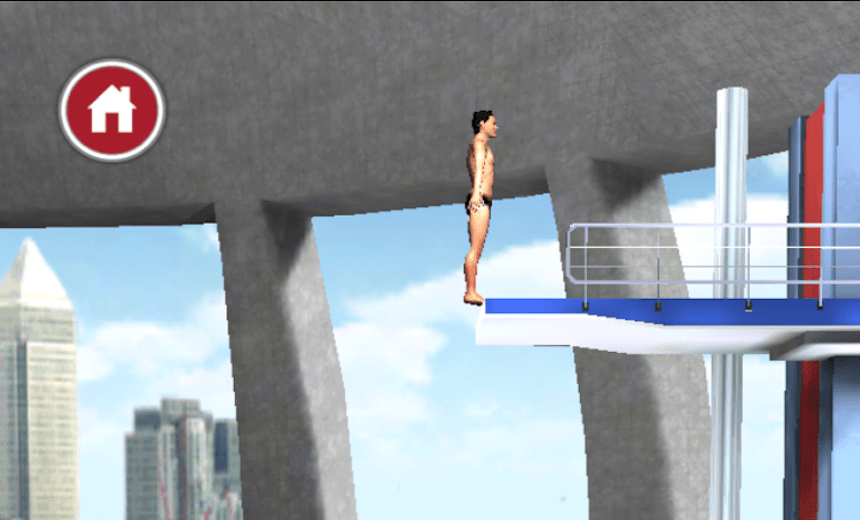 In the second instalment of Sam’s Celebrity Game Reviews, Sam takes a spin on a five year old game fronted by a somewhat successful and famous-within-a-specific-niche sportsman.

Tom Daley is most famous as the ridiculously ripped twink diver who was ogled by lots of older gay men at the 2012 Olympics and everybody assumed was straight, but then he came out as bisexual and now he’s engaged/married to Oscar winner Dustin Lance Black (Milk). But mostly he’s famous for being a really attractive diver. I guess he’s the gay man equivalent of Anna Kournikova, in that he’s much more famous for being attractive than he is for being good at his chosen sport (although he does have two bronze medals in diving, which is more than I have!).

Reader, I was curious. How much of Tom Daley would be in Tom Daley Dive 2012? Would it be some RPG where you got to play as Tom Daley and live through his life from media-hounded diver to presumably happily married man? Or would it be a Sims-esque game where you do the same? Maybe a first person shooter! The world of celebrity branding can be very weird, and I was excited for all the options that a video game company could possibly provide me.

Instead, Tom Daley Dive 2012 is an incredibly straightforward game in which you swipe across your screen to complete dives. I assume this is similar to Angry Birds, but the birds are instead dives. I wouldn’t know. I’ve never played Angry Birds and I feel the time has well passed where it would make sense for me to start. But still, I soldiered on.

I immediately found out that I was bad at this kind of a game. Very, very bad. The swipes you need to do to perform these dives are pretty goddamned precise and need finger-perfect timing. I do not have this. The sad little Tom Daley avatar fell into the water quite painfully many, many times while I tried to complete the 15 dives required to qualify for a championship.

Amount of game played: About two hours, which is too long for a game comprised entirely of creative-ish and precisely timed swipes.

Amount of [insert name of celebrity] in [insert name of celebrity game]: Tom Daley is the player character in Tom Daley Dive 2012! So he’s technically onscreen 100% of the game, aside from clicking in between menus to make Tom Daley dive. However, it’s a low pixel version of Tom Daley, which kind of defeats the purpose of playing a Tom Daley game. It might as well be anybody in that strategically-cut Speedo, you guys. I wish I knew more divers to make a few jokes about this but I do not.

Amount of $$$ spent on microtransactions: $1.49, which admittedly is less of a ‘microtransaction’ and more of an ‘upgrade to full game’, if you consider this a full game, and if you do, have you heard of a Playstation?

Amount of shameless promo for [name of celebrity]: Very little. This seems like a game where the mechanics and bones for the game were done first, and they had to find someone to sell it. Despite being only a two-time Olympic gold medalist, Tom Daley is currently our most famous diver, and so it’s his twink visage that is plastered all over this thing to sell it. It’s an oddly traditional: using a celebrity to sell a product, rather than using a product to sell a celebrity.

Should you play this? If you’re good at swiping, go ahead. If you’re not then I would stay away so your self-esteem remains securely intact.

Next game in this celebrity-branded series: The highly autobiographical Sniper X, fronted by Jason Statham.