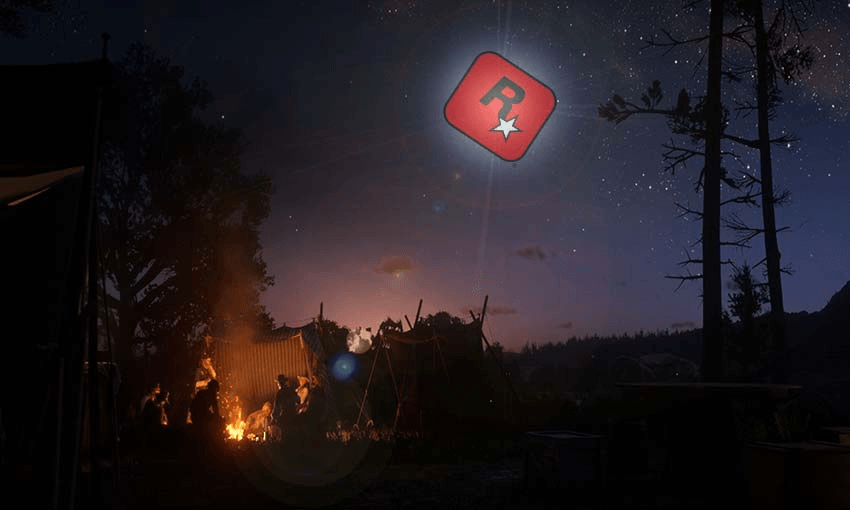 Red Dead Redemption 2 might be a hit, but Rockstar’s star is waning

Red Dead Redemption 2 is still creaming it and José Barbosa is still playing it and loving it. But the developer behind it is fast losing its sparkle.

If you’d take a moment and have a good squiz around you, you’ll figure out whose image the world has been remade in. We’re living in a world moulded and recut by Rockstar using the pure unrestrained force of their huge money laser.

Since Grand Theft Auto III  Rockstar has had us by the nipples, shouting in our ears: OH YOU DON’T LIKE CAR GAMES? THEN BOOM, EAT ON ON THIS FIRST PERSON SHOOTER; OH POOR BABY ISN’T INTO LINEAR MISSION GAMEPLAY, THEN SUCK ON THIS UNRESTRICTED OPEN WORLD AMUSEMENT PARK, YOU PIECE OF SHIT.

All that money goes into armies of animators shrinking horse balls or making characters pick up every single bit of loot by hand (there’s a great video by pro animator Daniel Floyd on the lengths Rockstar goes to for realism) and it fills up pre-launch promo videos and listicle videos by YouTubers, so by launch day one is fair frothing for the game.

Rockstar’s in the business of making games that are EVERYTHING. They’re at once both intense simulation games and quick fire shoot ‘em ups (Grand Theft Auto V), or sprawling Westworld-esque theme parks where anything goes and play-by-rails linear movies (Red Dead Redemption 2). RDR2 is the latest and therefore the most advanced example of a open world game in which every polygon appears to be dripping with potential. But it’s more game reserve than amusement park. It’s been noted numerous times that Rockstar seem to have ramped up the more quiet, slow and contemplative parts of the game world; the game wants you to take your time and seep into the world.

That’s been something of a risky play on Rockstar’s part. It’s turned off some of the players coming straight from GTAV. Bethesda and Todd Howard did something similar with Skyrim. Horses in the game could have been nothing more than huge containers for game tat – jewels, lesser soul gems and so many thousands of books – but they decided that carting around mounds of detritus like fantasy hoarders wasn’t what the game was. So they left it out. Players would have loved it, but Howard and the team made a clear statement about their game.

Rockstar decided RDR2 was going to be more of a smell-the-roses do-as-you-will experience. But it’s hard not to think that maybe they pulled back at the last minute and decided to have it both ways, doing real damage to the final product in the process.

A YouTube video by my hot boy Jacob Christensen (NakeyJakey) lays this out pretty well. He argues that Rockstar can’t seem to let go of this idea that their games should be more like movies. It’s a familiar Rockstar trope by now: you’re told to go somewhere and talk to someone, which sets off a cutscene where you have to go get something and you have to do it in a completely linear fashion. If you move outside the predetermined area you’re told to go back. If you don’t place a wagon or horse in exactly the right place the mission doesn’t progress and so on.

This butts right up against the free-for-all simulation type setting of the game. It seems to want players to do what they want, go anywhere… but once you’re inside a mission the rails come out. And it’s something Christensen argues that Rockstar haven’t always done. He recounts curtailing a car chase mission in GTA3 by simply placing a car somewhere and then blowing it up when the target NPC appeared. That ability to improvise and create your own path to mission goals seems to have disappeared in Rockstar’s later games.

For Christensen the linear, rail-like missions fly right in the face of the sim-like open worlds. You can’t have it both ways – one approach will ultimately suffer. The player is denied the joy of finding their own path to mission completion, which wouldn’t be such a problem if the game didn’t seem to be offering the player that freedom.

I’m less bummed out by it than Christensen. There’s a multitude of sins being committed out there right now, and the least of them is uneven gameplay in a video game, particularly when those sins include Rockstar’s labour practices. But, yeah, it kinda sucks that you can break into a back room money laundering operation, swipe all the cash, and then find you can’t open a rear door to escape for no discernible reason. Of course the reason is Rockstar wants you to go out the front door so you can have a shootout with the law.

Beyond that Rockstar still needs to overcome the repetitive nature of missions. Everything seems to be a variation on a cluster of mission formulas: go shoot him, go get that, collect these etc etc. You know the drill by now.

As suggested earlier the answer seems to be in Rockstar’s past, a past when the goal was less about making an interactive movie (still a valid choice, by the way – Max Payne 2 is a ripper cinematic game, but that’s partly because it sticks to that and doesn’t promise the player anything else) and more about making a game.