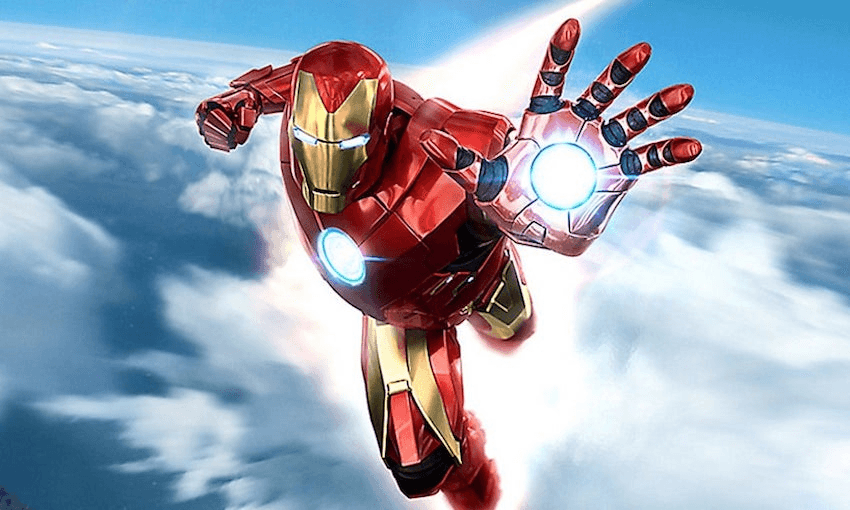 See this man of iron? This could be you, in Iron Man VR.

See this man of iron? This could be you, in Iron Man VR.

Ever wanted to be Iron Man? Sam Brooks prefers Pepper Potts, but he had a great time stepping into the iron suit anyway.

The first few moments of Iron Man VR are where it plays its hand, confidently and assuredly. You hold your palms out in front of you, and Iron Man’s shiny, red-bronze suit-hands follow suit. You press a button to engage Iron Man’s thrusters, moving your hands by your side. You then turn your palms behind you, and you, as Iron Man, fly forward across the Pacific Ocean. The Sony Interactive Entertainment flies past you, followed by the famous Marvel logo. Then finally: Iron Man VR. You’re flying, and you, in your lounge or designated gaming area, are Iron Man.

Full disclosure: This is my first PSVR game. Like a gaming luddite, I’m wary of new technology, especially when it hasn’t quite been worked out yet. VR, much like the previous Playstation Move, seemed to me like an experiment that would never quite take off. Also? It’s very physical and I play games to sit down, not stand up. I’m a man of simple needs and demands, what can I say?

Iron Man VR comes at the end of a generation, when VR has been able to work out the kinks and quirks inherent to the form – it’s moved out of its adolescence into confident adulthood. As a result, there’s a welcome slickness to it. When I first started playing it, there was the initial feeling of discomfort, similar to what I imagine people watching The Great Train Robbery over a century ago felt when they saw the train coming at them. It fell in the uncanny valley of both too real and too fake; reality with some senses removed. Once I acclimatised to the experience and some of the quirks of the form – namely that there’s no walking, and in the non-combat sequences, you press a button to move between viewpoints with a brief fade out and fade in – it was a seamless experience.

In many ways, Iron Man is a genius hero to step into the virtual space with. There is a strange harmony in the fact that wearing the PSVR visor is a physically similar feeling to wearing Iron Man’s own helmet; which already puts it a hair above other games of this ilk. When you’re looking at the HUD of the game, a necessary but disconnecting moment in more or less every immersive video game, it feels like you’re actually Tony Stark inside his big ol’ suit looking at his HUD. It sounds small, but it’s the kind of immersion that VR is sold on, and when you’ve got a concept that lends itself well to the form, you’re over halfway of the way to a success.

The rest of the success comes from being a slick, well-made and enjoyable game which Iron Man VR is. It succeeds in one very simple thing: when it comes to actually being Iron Man, it’s visceral and it’s bloody fun. When you’re flying around blasting drones – as the game has you blasting drones and other such creations out of the sky as your main enemy – it feels like you’re darting about the sky, firing blasts from your hands and punching things with those same hands. It’s fun enough that it never quite gets repetitive, and while it can be tiring to play for long periods of time (or I just need to get used to standing up for longer), this is a game that works best, much like the suit’s repulsor blasts, in short bursts.

Some of the limits of Iron Man VR, unsurprisingly, come down to the tech. While the feeling of flying is initially quite breathtaking, that dims a bit once it gets to turning – because of how the PSVR is tethered to the console, you press a button on the wands to turn. It takes out a bit of the thrill of being Iron Man when your forward movement feels like flying, but turning feels like holding a controller. Most of the story is contained to sections when you’re wandering around as de-suited Tony Stark and it’s here where the seams start to show – it’s like flicking between slides on a slideshow rather than actually existing as Tony Stark. This is especially true when compared to how seamless and immersive the Iron Man segments (ie most of the game) are.

Like any Marvel game, it exists under the shadow of the Marvel Cinematic Universe. It has the same technicolour aesthetic, Whedon-esque snark (and boy has that kind of snark not aged well) and vaguely uplifting narrative. This extends so far as to veteran voice actor Josh Keaton’s performance as Tony Stark; it feels less like an individual take on the sober-but-silly weapons designer and more an impression of Robert Downey Jnr’s smirky, stammering Stark. It’s an understandable choice; the MCU Stark is what most of the audience will be familiar with, but it makes you wish that these high-budget games explored the full scope of what the Marvel (non-cinematic) Universe is capable of, tonally and otherwise. (I may be the only person in the world who is disappointed that Gwyneth Paltrow does not reprise her role, a grievance I will table for another time.)

But the goal of the game is simple, and in that, it excels: let me be Iron Man. It lets you be Iron Man. At the end of a generation, with no sign of VR going anywhere or truly taking off into being fully picked up by the mainstream in the same way that seated gaming (not an official term) is, it’s perhaps an indicator of where VR developers should be going. Focus on experiences that lend themselves to VR inherently – simple, visceral, immediate – rather than experiences that don’t. Put the player in someone’s shoes, or someone’s suit, for a couple of hours and do that well until you excel at it. Iron Man VR puts you in the very fun suit, and by letting you fly, the game itself flies.