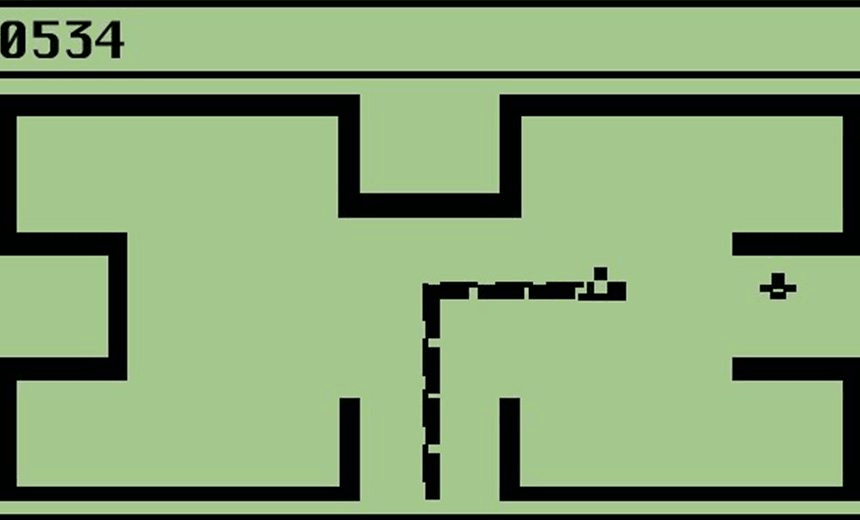 It is primal. It is the true modern ouroboros. It is Snake, the twisty-turny frenzied reflection of ourselves. In Snake (as in life) the obstacle to overcome is ourselves. Here a bevy of Spinoff writers each play a single round (enforced), compare scores and eventually crown a winner.

My first phone was a sweet Panasonic flip which my sister bought my for my 21st. It probably cost about $10,000 in today’s dollars, but was then like $200. It was a better phone than anyone my age had any right to, so I broke it or lost it within six months or so. I replaced it with a Nokia, a worse phone style-wise, but it had Snake, so it got thumbed to hell. I was working on the helpdesk at Datacom at the time, doing a lot of 12 hour night shifts changing backup tapes and watching the first season of Joey over and over, because it was on the shared drive. (I might be the only person on earth who thinks that’s an underrated show). The combination of endless time and Snake was incredible – I had a very good time filling the screen with the long reptile. Until I discovered crimelibrary.com…

How’d I do: On my one go I was shocked by the speed of it. The thing was really slithering! But after I aced a couple of turns I got cocky, tried to do a 180 and crashed into a wall. Bad times.

And so went the most horrific and terrifying phone call of my young life. In trying to pull off a 270 degree switcharoo, I had inadvertently dialed the emergency line, and now the full weight of the law was coming down upon me. They were really pissed. Hot, salty tears ran down my cherubic cheeks. All but paralysed with fear I did what anyone else would – I tore the battery from the phone and threw it at a cinderblock wall. Dad was stoked.

It was the last time I played Snake, and the rust was real. My reflexes, aged now, proved insufficient. With just 63 I crashed headfirst into the wall. Just like dad’s phone, all those years ago.

I got a bad score but I blame it on being better versed in the much more complex and rewarding Snake II – all extra treats and Platform 9 3/4 walls. Primary school folklore told of a friend of a friend’s sister who was able to fill the Snake II screen to complete darkness. She was spoken of in hushed whisperings across the playground like some kind of Sasquatch.

I still to this day have not seen it happen. I never got anywhere close to a full black screen as a kid or now, choosing to charge boldly forward in Snake II to get the bonus mice and elusive centipede character with reckless abandon. ‘Twas never a sad affair for my snake to pass away after a risky but delicious point-plentiful snack. Live fast, die young imo.

I had the exact Nokia they’re talking about bringing back in 7th form and yes I thrashed Snake. Don’t want to blow my own horn too much but I used to regularly fill the screen. No big deal. Snake more than maybe any other game requires proper tactile buttons. It doesn’t translate to touch screen. Also I no longer have the attention span.

That took way too long and now I have no time to write about it sorry team.