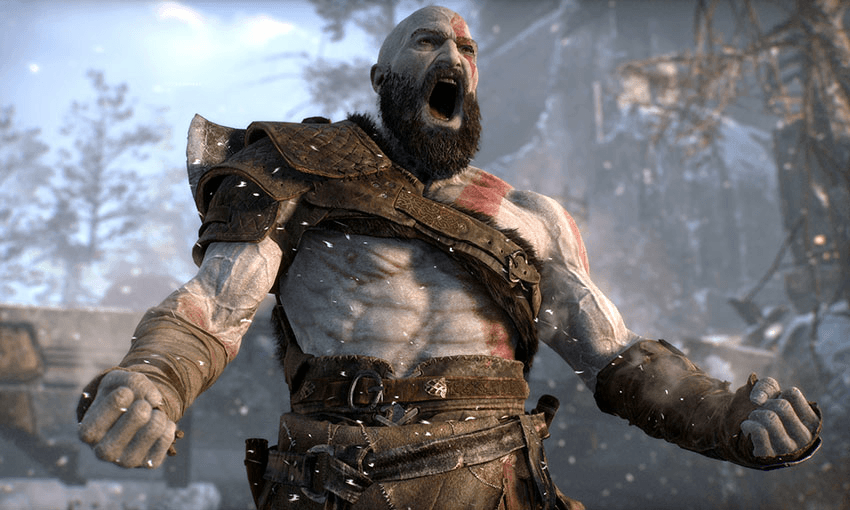 Exclusive: God of War and Kant’s theory of the sublime

Through clever manipulation of scale and mythos, the latest iteration of God of War makes the most of Immanuel Kant’s theory of the sublime to deliver a truly beautiful game. Don Rowe travelled to Sydney to gets his hands on a preview.

German philosopher Immanuel Kant’s theory of the sublime, devised in what I’d imagine were the perpetually grey and rainy 1700s, seems an odd lens through which to view video games, separated as concepts as they are by several hundred years. But Kant’s enduring work does provide us with a unique vocabulary to describe what is a fundamental principle of game design – the ability to overwhelm players, inducing fear and ecstasy at the same time.

In short, Kant categorised the sublime into two parts: the mathematical and dynamical. The feeling of the mathematical sublime relates to the concept of infinity, and is experienced when looking at seemingly endless crowds, or horizons as one might see them in the salt flats of Bolivia.

The dynamical sublime is a little different. This feeling is inextricably linked with the potential of complete annihilation, whether by a raging storm, an avalanche, a volcano or some other force of nature. Two conditions are crucial to experiencing the feeling of the dynamical sublime: fear and a safe distance from its source.

These are the mechanisms by which some games elevate themselves from light entertainment to something greater. Think Shadow of the Colossus, The Last Guardian, escaping the sewer in Oblivion.

Think God of War, and never more so than in its latest iteration on the PS4.

A hack-and-slash, action-adventure series, God of War follows the story of Kratos, a Spartan demigod slaughtering his way through the Greek pantheon. Roughly man-sized, albeit yoked and tattooed, Kratos takes on everyone from Poseidon through to Cerebus, and is almost always outweighed and outgunned.

“God of War has always been about players experiencing that clash of the titans feeling of ‘holy shit, this feels larger than life,'” Santa Monica Studios’ Aaron Kaufman told me. “It’s all about the perception of the player as the character versus the world around him.”

The dynamic sublime in action.

At the end of God of War III on the Playstation 3, Kratos finally puts Zeus in the dirt – then vanishes. Many years later, Kratos is back, but he’s a man reborn, bearded now and living in a proto-Scandinavia. The landscape is formidable, with plunging ravines, frozen lakes and perilous nordic peaks. On the PS4 pro in 4k definition, God of War‘s game world is gorgeous. And hostile.

“Kratos really had to go into isolation after his dark adventures in Greece,” says Kaufman. “What better place for him to end up than the isolated, dark and frosty tundra of somewhere like Iceland? It just feels like a place where a man would go to rediscover his humanity, to get away from everything.”

While Nordic mythology plays second fiddle to that of the Mediterranean in our history classes, it does nonetheless inform our culture in another way, in that seminal books like The Lord of the Rings draw heavily on the Scandinavian pantheon. Trolls, orcs, giants, witches – all these mythological creatures that populate our most iconic works of fantasy are reflections of the cultures of the north, and the environmental challenges they face.

Kratos is isolated in the Nordic realms, but not alone. He has a son, Atreus, whose very existence has tempered Kratos’ unquenchable bloodlust – at least somewhat. This relationship adds another wrinkle to the formerly single-minded demigod, who’s dealing with the inevitable maturation fatherhood brings in his own clumsy, brutish way. In fact, the change in Kratos’ echos that within Cory Barlog, creative director at Santa Monica Studios.

“Cory was in isolation in a sense during his time away from Santa Monica,” says Kaufman. “But in that time he had his son, and he has been learning how to be a father. There are parallels directly pulled from his life in this game, and I think the greater theme in this new God of War is a notion of being better. We can all be better, we can all be better than we were yesterday or better for our kids or people who are going to shape our society in the future. In a very micro sense, this is about a father and his son trying to learn how to be together and to learn from one another, and how that affects how they grow as a pair. I think we can all relate to that on some level.”

Like all God of War games, it’s also about smacking beasties about, albeit with a few new twists. Kratos’ signature chain-blades are gone, replaced with an axe modeled in part on Thor’s hammer Mjölnir. Atreus can fight too, passively darting around during combat and firing his bow at targets manually selected by the player. Combat is smooth, gorgeous and impactful. Mercifully, the camera is now an over-the-shoulder free camera as opposed to the fixed cinematic camera in previous entries. Everything has weight, particularly the boss fights, which are as exhilarating as any in gaming.

“But in this new God of War it’s not only about the amount of bosses we can throw at you or the amount of skyscraper sized titans,” says Kaufman. “It’s about doing what’s right while still being couched in a plausible, believable universe. That feeling, you’re going to get it just by looking at the world around you, by looking at the vastness of the lakes, the valleys, and the height of the mountain you’re destined to reach the top of.”

To my ears, that sounds truly sublime.

God of War is released for the PS4 on 20th April.

Disclosure: Don Rowe was in Sydney for the God of War preview courtesy of Sony.