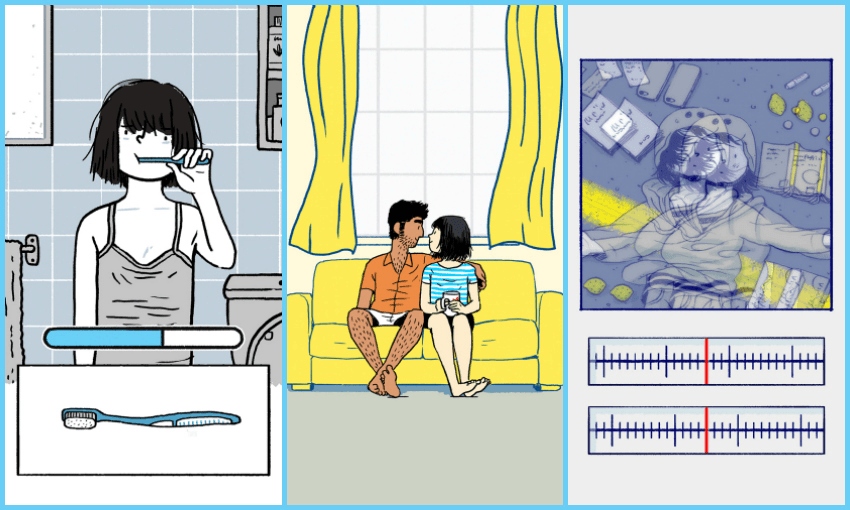 A new game from Mountains Studio aims to tell an authentic, full-bodied love story – and it’s all on your phone. Sam Brooks reviews Florence.

Video games don’t have a great track record of showing people falling in love, historically. When you think of how video games represent love, you think of Mario rescuing Peach from a castle or long and senseless dialogue trees in BioWare game that move from getting-to-know-you to inseparable soulmates in the space of about fifteen minutes. So I was sceptical about Florence, a game about two normies falling in and out of love – and a mobile game at that.

Released this week for iOS, Florence tells a simple story. Florence is mid-twenties adult with a latent interest in becoming an artist (an interest made harder by the reality of having to have a job and live a life) who meets an aspiring musician called Krish. They fall in love and they fall out of love, and do so in the form of a subtlely gameified visual novel, which also looks much more like a graphic novel than most visual novels do.

You swipe through panels – it’s probably more accurate to call them screens – and play through game-like elements: you tidy up your desk, you match numbers at work, you wander your finger around your screen to brush your teeth, all while watching the story unfold. It’s a genuinely emotional, involving experience, made all the more effective by the cello score that underscores the whole thing.

Florence is fairly unique in gaming right now, but it represents where narratives in games, especially on an indie level, are going: more relateable, more human, and ultimately less gamefied (but no less emotionally engaging) stories. It’s not Mario saving the Princess, it’s real people living lives that are closer to ours. It’s gaming slipping into its 70s phase, its 90s indie film phase, its mumblecore phase. There’s upsides and downsides to this.

The thing that Florence does extremely right, and the one thing that it does that really only video games can do, is the way it turns falling in love into a game. When you’re figuring out how Florence interacts with Krish, you’re putting jigsaw puzzles together. The more Florence interacts with Krish, the easier the puzzle pieces get to put together. It’s a five-piece puzzle, then a three, and then a simple two-piece puzzle. It’s not like just watching people fall in love, it’s making you feel the process; it gets easier and easier to interact with somebody as you understand them more.

And even more impressively, Florence manages to show the reverse. As Florence and Krish inevitably fall out of love, as has to happen in this kind of a game and this kind of a story, the puzzles get more difficult. They go from two pieces to three pieces to five pieces until, in the game’s most beautiful and moving moment, you have to try fit all the pieces together, like a memory, and they’re slowly drifting apart. It’s the closest the game gets to being ‘difficult’, in the traditional sense, and it’s the most aching and hard thing about it. In that moment, the game is not just about a relationship you care about dissolving, but a relationship that you as a player have actively tried to put back together. Like in the famous Amy Winehouse song, love is a losing game and Florence shows that better than any game I’ve played.

There’s a certain staleness to Florence – this isn’t a particularly revolutionary love story, and it hits the familiar beats of one person finding their art and losing track of their relationship, while the other half of that relationship finds they’re sacrificing their happiness for the continued success of the other. This isn’t the fault of the game, necessarily, it’s more the fact that we’ve seen this story before in other mediums – La La Land comes to mind immediately, but any story from Before Midnight to Like Crazy have covered this territory – so while the form of this story is absolutely fresh and new, the story itself isn’t necessarily so.

But it’s so refreshing to see Florence actually attempt to tell an authentic love story, and to give it the same weight that we’ve seen love stories given in books, films and music. There’s a specificity and a beauty to it that has lingered with me ever since pressing the home screen and closing the game down. It’s not smashing through the glass of narrative in video games, but it’s putting a hand against the glass and sighing wistfully, wondering what was and what could’ve been.