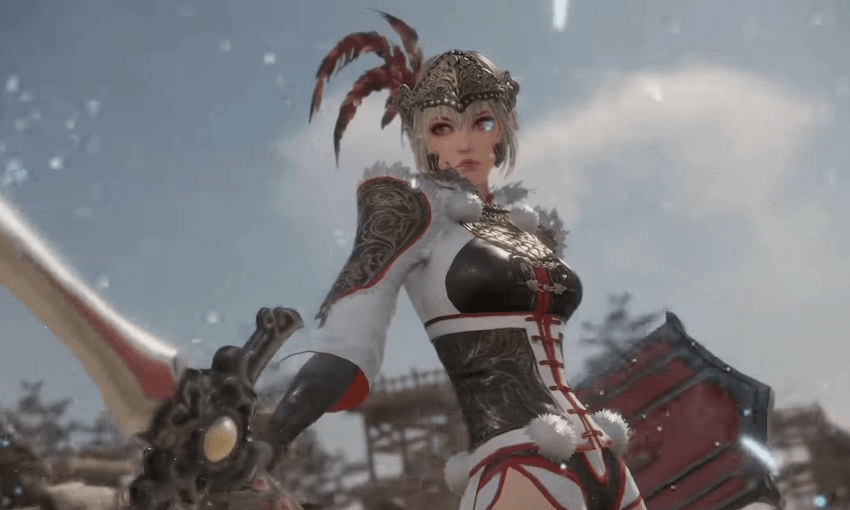 When good love goes to a bad game: Dynasty Warriors 9

Romance of the Three Kingdoms addict Sam Brooks has spent a lot of hours on Dynasty Warriors 9 and it’s… not good. So why can’t he put it down?

Dynasty Warriors 9 is not a good game. I know that.

The critical drubbing it has received, even from fans, has been huge. A lot of these are diehard fans who would have been impossible to please – fans who are so shocked by the fact they changed Zhang He’s weapon from claws to throwing knives that they would boycott the game as a result (in fairness, this is a huge change to the established fantasy canon of Dynasty Warriors weapons). But even more casual fans are put out by the new game.

In the shift from a contained level-by-level, battle-by-battle progression to a looser, sparsely populated world, the game has taken all the worst parts of the open world games we love (Skyrim) and tolerate (most of Ubisoft’s output) and stretched the entire geography of second-century China over it. Within battles, the combat has become even more repetitive, reducing the amount of weapons and the amount of moves within each weapon drastically, and limiting the variance even between battles. Battles as distinctive as Chi Bi, where two armies literally set fire to an entire fleet of boats, or Hu Lao Gate, with the undefeatable Lu Bu, feel thinned out and generic. The game is easy, but it’s also shockingly easy to be overpowered and stay that way, regardless of which one of 93 characters you’re using.

And yet I have played this game for 50 hours. And will likely play it for 50 more, and then 50 more beyond that.

The first reason? It’s a Warriors game, and a flagship Warriors game. There are countless Warriors games now – you can cut through thousands of troops with the the cast of One Piece, a few Gundam mechas, the cast of Zelda even – so when I say flagship I mean the OG: Dynasty Warriors. (I’ve also played every Samurai Warriors game, but nobody’s keeping count.)

Although I often spend time in this world and this universe, Dynasty Warriors is my chance to do it again. I love this era of history, and I love all the media that has sprung up around it, be it books, video games or television. At the risk of outing myself as a huge nerd, when I was a teenager I played a forum roleplaying game set during this time. Think Dungeon & Dragons but even more in-depth, because this forum game was independently developed, had its own mechanics, and set entirely in the world and realm of second century China, largely inspired by the Dynasty Warriors games. I had a lot of fun playing it, and you can read more about it here, because it’s not super relevant to this piece and I try to keep my nerdery at least somewhat tamped down.

In short, it’s a world that I know very well, probably better than the actual world I inhabit – I definitely know more about this era of politics and what role everybody served in their various governments than I do my own. It’s a world that I feel safe and cocooned in.

This isn’t a strange experience for gamers – it’s what keeps us returning to our favourite games. Think of the guy who is still playing Call of Duty: Black Ops, which I will always call Codblops because that is very, very funny. Sure, he got into it because he likes shooting things and it’s a potentially worrying way to get his aggression out, but he keeps playing it because he likes it. He knows the rules. He’s good at it, even. It’s a step into a world that isn’t his own, and a way to escape that world. It’s why we engage with many kinds of fiction. Hell, even reality TV is a form of escapism into a real world that isn’t necessarily our own.

That dude has Codblops. I have second century China. My escapism is into the world of the Yellow Turban Rebellion (which has always problematically coded the rebels as vaguely Arabic), the world of Hu Lao Gate (with it’s famous ‘i-i-it’s Lu Bu’ meme) and the world of the Three Kingdoms, with its simultaneously vibrant and one dimensional heroes.

I’ve played 16 of these games to near one hundred percent completion: Dynasty Wariors 2 right through to 9, with all the Xtreme Legends and Empires expansions. I would argue that none of them are great games, but it’s like the local restaurant that you’ve been going to since childhood. The management has changed, you don’t know any of the waiters, the entire menu has changed, but you keep going because it’s your restaurant. On some level, you keep going because it’s where you feel safe and looked after, even if the actual quality of the restaurant is middling and you can see the mould filling in the corners.

I’ll keep buying Dynasty Warriors games so long as they’re selling them. And not because they’re the only Romance of the Three Kingdoms games out – god knows they’re not, and god knows I’ve spent hundreds of hours on those other games – but because they’re mine. They’re where I feel safe. They’re home.

But yeah, it’s a bad game. Don’t buy it unless you’re obsessed like I am, and if you are, let’s hang out at our favourite restaurant together!