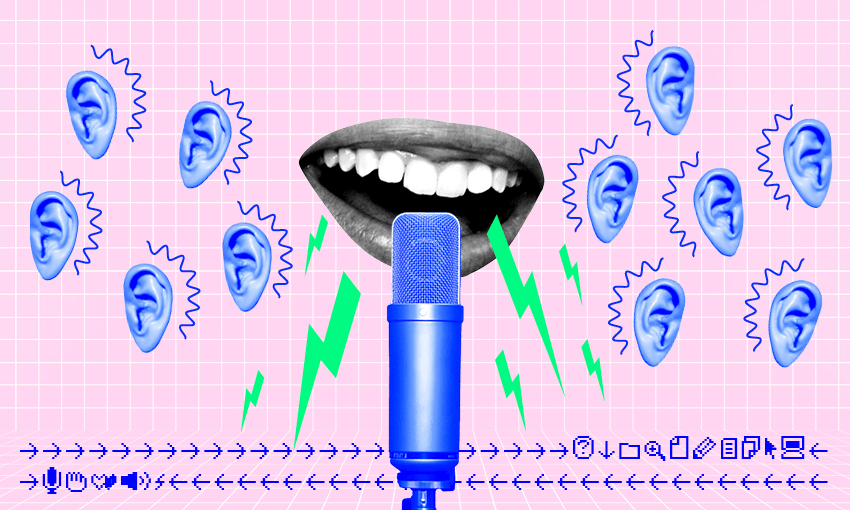 Thousands of people want to watch me whisper

Kat, AKA ShiverMeTingles, is a New Zealand ‘ASMRtist’, a YouTube creator who makes videos aiming to generate a tingling response among viewers. For IRL, she tells Shanti Mathias all about her weird internet job.

I make ASMR videos, and I’m one of the few Kiwis who do it. ASMR stands for Autonomous Sensory Meridian Response, and I explain it as a physical feeling, not an emotional feeling. It’s a tingling sensation that starts at the back of the head and moves down the spine. You know that tingly feeling you get if someone pretends to crack an egg on your head? It’s like that, but it can be triggered by certain sounds or looking at things, like whispering or tapping or gentle lights.

I was an early bird to ASMR; I discovered it when I was still in high school. I wanted to become a massage therapist, so I was watching tutorials, and there were whispered versions. It was called the whispering community then, in the underground of the internet. Someone coined the word “ASMR” a few years later in a Facebook group.

I was 19 at the time, and I just did it because I wanted something fun to do and I thought, “I’d like to try that out.” I made a few videos, but then I went to university and studied biology and psychology, and life just made it not a priority, so I only came back to it last year.

Someone pointed out the inspiration for my videos: they said, “You remind me of Suzy Cato.” I was like, “Yes! I can retire now, I’m done. I want to be Suzy Cato for grown ups.” I make lots of different videos, medical roleplay, personal attention, face memorising.

Some videos require a lot of preparation. I watch medical tutorials from actual doctors to get a sense of how to do it. I also keep tabs on a Reddit thread that lists the 40 most popular ASMR videos that week so I know what’s trending. I need to get some props, which can make filming difficult if there’s a continuity issue when I forget a step, and then the background is different when I re-film it.

I also watch a lot of ASMR, I’m subscribed to 700 channels. I’ve trained my brain to produce the tingles on command, I just need some kind of stimuli. The only kind I don’t like is chewing, but it’s important to have options; if you have a TV you want every channel.

I really like adding humour to my videos. My favourites are not what other people love – if I did just what my subscribers wanted there would be a lot more medical roleplay, which is where most of my new traffic comes from. I did a video inspired by Black Books, which wasn’t that popular but I loved it. I’m doing more face memorisation videos now, which marry a trending concept with comedy. The medical roleplay views fizzle out even if the video goes big fast, but if there’s a unique twist you keep the repeat views.

The humour is mostly for me, because when I’m editing a video where I’m tapping on a rock for an hour, it can be so boring. And I can’t trigger my own ASMR. People watch ASMR to relax – even if they don’t get the tingle, it helps them sleep. You know with ASMR there will be no loud noises, no scary surprises, and if you inject funnies into it, it creates a really positive experience for people.

I would definitely say ASMR is an artform, it’s such a collision of so many kinds of art. It’s performance art, it’s entertainment, it’s a visual experience, some people really go for it technically – cinematic ASMR is a big thing at the moment.

Before focusing solely on ASMR, I was doing photography as a sole trader, and that helped in terms of techniques. I can edit and do the lighting and use FinalCut. I also paint, and I spent a lot of my early twenties doing improv, and that definitely feeds into my videos. I don’t script, even if the video is quite long; I just make a list of what needs to be in it and go from there. All that creativity is needed for the videos I make.

I’d love there to be more scientific research into ASMR. As a hybrid of performance and visuals and caring for people and healing, I think it’s really under-researched as a therapeutic practice. It’s such an accessible way for people to relax, not as a replacement for professional support but as a stepping stone in between. I’d love to go back to university one day and find a way to research it more.

I’m really serious about doing ASMR. It’s not my full time income yet, but that’s my goal. I have nearly 20,000 subscribers now, and it’s like being an entrepreneur: you have to work through this grind period. It’s a great way to earn some income, but you have to believe in the product, and treat it like a job. It takes a huge amount of time to grow a channel, and I’m lucky that I have other support which lets me focus on it.

I even have to think about it in terms of where I live; I might find a perfect house, but if it’s right next to a school it’s like, “No, I can’t live there.” Most creators try to film at night, because if there’s any background noise it’s really distracting.

It gets so surreal sometimes. I can see where my subscribers come from – lots from the US, the UK, Scandinavian countries, South America – and I’ve never left Aotearoa, so it’s a confirmation that these other countries exist. All these people from around the world are watching a random Kiwi girl on the internet whispering into the microphone. I try to reply to lots of the comments I get, especially the ones that are encouraging or about techniques I’ve used, or make jokes. I’m manifesting a supportive, open-minded community where people can be themselves and be safe.

Some of my videos have gotten hundreds of thousands of views, though I don’t feel at all famous. The most popular video is a cranial nerve exam. The day I did that I was having the worst time, I didn’t want to do it, I was pushing through. It’s so funny, I did not expect it to do that well, but it feels good when that happens. I like knowing that I’m going to eat that week from a video. But knowing the full scale of how big ASMR videos can get – there’s a video that got 37 million views in a year – I’m still small. The thought of how big it can get is both exciting and overwhelming.

People in my real life are really open-minded; some of them pushed me to make ASMR content even when I wasn’t sure about it. I try to explain that it’s therapeutic. One of my older family members told me, “It sounds lovely, but it’s a bit too ‘woo’ for me,” and I had to laugh, like, “OK!” I can feel myself changing when I’m ShiverMeTingles: Kat is a lot less gentle, and I swear a lot – YouTube hates swearing – and have a dirtier sense of humour.

I just want to make weird stuff, have a community that says, “That’s so weird, I’m excited.” There’s this generation of people who grew up on the internet, and the “weird” stuff is normal. The internet has provided opportunities human beings couldn’t have dreamed of 10 years ago.

And I’m always thinking of my next video idea – Salad Fingers ASMR for Halloween, maybe?

Do you have a weird internet job? Met the love of your life in a strange way online? Gone off the grid completely? If you’ve got a great yarn about the internet impacting your life, get in touch with us at irl@thespinoff.co.nz.