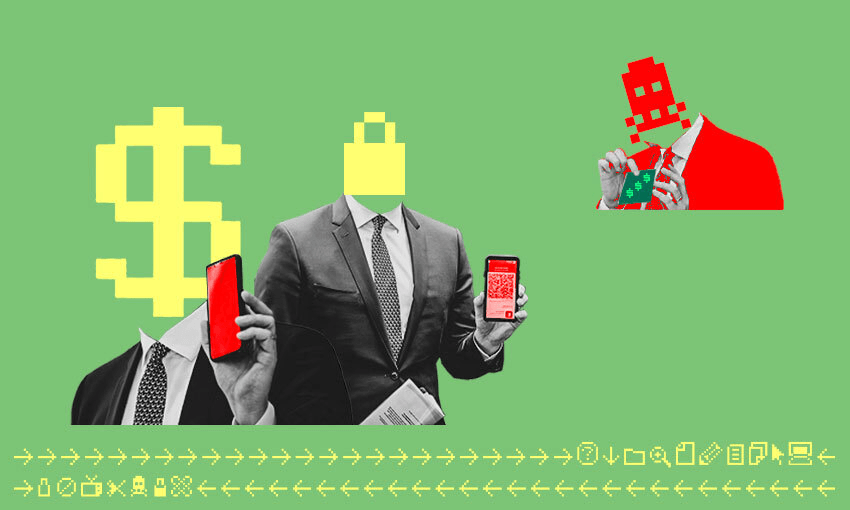 Vaccine resistance is creating a business opportunity for fraudsters

Anti-vax Facebook groups, Telegram channels and Instagram feeds are being filled with schemes for helping the vaccine-resistant retain the same freedoms as their jabbed contemporaries, as proof of vaccination is set to become part of daily life in Aotearoa.

Of particular concern to many in these groups is remaining employed while avoiding immunisation. Some proudly announce that they’ve quit their jobs rather than comply with vaccine mandates, but for those who can’t quit on principle, there’s a growing supply of advice, services and scams to assist.

There is one actual lawyer, however, who has become a hero within these groups. Nelson-based lawyer and Outdoors Party co-leader Sue Grey is a celebrity of sorts among New Zealand’s vaccine-resistant community for bringing numerous court actions against the government in relation to its Covid policies. It’s often suggested in these groups that she’s just one ruling away from bringing the whole government Covid response crashing down.

But others worry that such a ruling won’t come soon enough, and doubt that the free legal letters will work. Facing the very real threat of unemployment, as well as social exclusion and lack of access to certain services, they will try anything.

Anything short of getting vaccinated, anyway.

The strong desire to find a workaround to vaccine mandates and certificates makes these people easy prey for grifters, scammers and opportunists, who offer services ranging from dubious advice all the way through to fraudulent documents. What all these services have in common, though, is that the provider offers no guarantees.

When reached by phone, Warren said a stranger approached her on Instagram to tell her about the service, and she wanted to let others know about the offer. “A random … messaged me, and I was like, ‘Whoa, this is intense, this is where the world’s got to’,” she said.

But in an Instagram video offering to connect interested viewers with the nurse, Warren doesn’t seem so circumspect. “Give me a call, we’ve cracked the game of life, they don’t control us anymore,” she said in the video, before screaming, “Freedom!”

NZDSOS is a group of doctors who claim to be raising legitimate concerns about vaccine safety and efficacy, but its membership contains some evangelical proponents of Covid conspiracy theories. The group now offers an “online clinic” on its website, promising to provide vaccine exemptions following a 15-minute, $75 online consultation.

In recent days, the Ministry of Health has revised the exemption policy in relation to mandatory vaccination for staff in the healthcare, education and corrections workforces. Medical exemptions are now only available in strictly limited circumstances, have a limited period of validity, and pass through a single approval process within the ministry.

In private employment situations the rules are murkier, but many of the hopeful probably don’t realise that a vaccine exemption isn’t a golden ticket for avoiding job loss. “Exemption certificates are going to bring with them a raft of challenges for employers,” said Laura Scampion, partner and head of employment law at DLA Piper. “I think what you’ll find is that employers enter into consultation with those individuals [with medical exemptions] about ways in which they can work differently.” However, she notes that if the nature of the employment means that “adjustments just can’t be made” – she gives the example of a truck driver who can’t feasibly work from home or in an isolated space at the office –  “those people, in many circumstances, will probably have to go through a consultation period and may have their employment terminated.”

Because medical exemptions aren’t a get-out-of-jail-free card, some vaccine-resistant types are seeking a better alternative: “proof” of vaccination. Naturally enough, services are popping up to meet this demand.

A user calling themselves “Vax Card NZ” has been marketing one such service in many local groups on Telegram, a communications platform that’s become an anti-vax hub due to its encrypted messaging and lack of censorship. Vax Card NZ promises to provide “an image of a vaccine card with your name on it” for only $25, although payment must be made via a cryptocurrency.

Surprisingly, Vax Card NZ agreed to be interviewed over Telegram text chat, although they declined to provide a real name. They said their process involved creating a physical fake of the card (the sort handed out by the vaccinator after you receive your shot), photographing it, and emailing it to the client. The idea is that the client will claim to have lost their physical card when it’s requested, but conveniently have a photo of it.

Asked if clients would have the option of purchasing a physical card rather than just a photograph, Vax Card NZ said no. “We could probably get away with it, but it does have its risks,” they said. “It is harder to tell that the card in the photo is fake.”

When we spoke, Vax Card NZ claimed to have sold 20-30 of these card photos, mostly to people who want “to convince their boss that they have taken the vaccine.”

Vax Card NZ’s service might sound like a rip-off, but there are even more explicit scammers lurking in these groups, the sort who are likely to take your money and give you something completely useless, or nothing at all. They arrive out of the blue in the Telegram and Facebook channels offering official vaccine certificates – a document not even available in New Zealand yet – or access to services that might otherwise be unavailable. While some group members push back against these scams, others express interest in the offerings.

In a recent example, a user calling themselves “Dr Kent Jonas” offered to sell a “fit to fly certificate, vaccine passe [sic] with QR code” – presumably some type of official vaccine certificate. The “doctor” was sure to warn the group’s users that they definitely shouldn’t take the vaccine.

When approached for more information, Jonas was confident he could provide a certificate suitable for an employer, but said “it’s going to cost 250” (the currency wasn’t specified.) When I suggested cost might be a barrier, he dropped the price to 200.

Asked about exactly what he was providing, he offered a sample image of what appeared to be an NHS certificate from the United Kingdom, despite advertising his service in New Zealand groups. I told Jonas that I needed a New Zealand document and he assured me that was no problem – he just needed my name, date of birth, email address, postal address and phone number up front, and provided a PayPal address for payment.

So far I haven’t given him my real details or paid him any money, so who knows what document I might have received if I did – or what kind of identity-theft fiasco I might have landed myself in.

Another user claimed to provide CDC-verified vaccine cards, at a cheaper price. “Dr Daniel” told me “it’s gonna cost you 150,” again with no currency specified. All he needed was my name, age, sex and blood group. By tricking Daniel into clicking a link I sent him, I was able to determine that he was probably operating from Cameroon.

Some group administrators delete these advertisements or set up bots to combat obvious spam, but the offers keep arising, and are presumably being posted with some success. However, no matter how much users pay or what quality of document they receive (assuming they receive anything at all), using a false document is a dicey gamble.

In an employment situation, presenting a fraudulent document “confirming” vaccination status could result in summary dismissal, employment lawyer Scampion said. “I think that employers would be on a fairly strong footing there,” she said.

Using a forged document is also a crime with a maximum penalty of 10 years imprisonment.

Vaccine-resistant New Zealanders seeking services to avoid vaccine mandates and certificates face real risks: wasting money on shoddy medical exemptions and vaccine cards that won’t help and may even make things worse; getting ripped off completely by international scammers trying to make a quick buck; and running the legal risks that go with using forged documents.

Meanwhile, the vaccine is safe, effective and free.