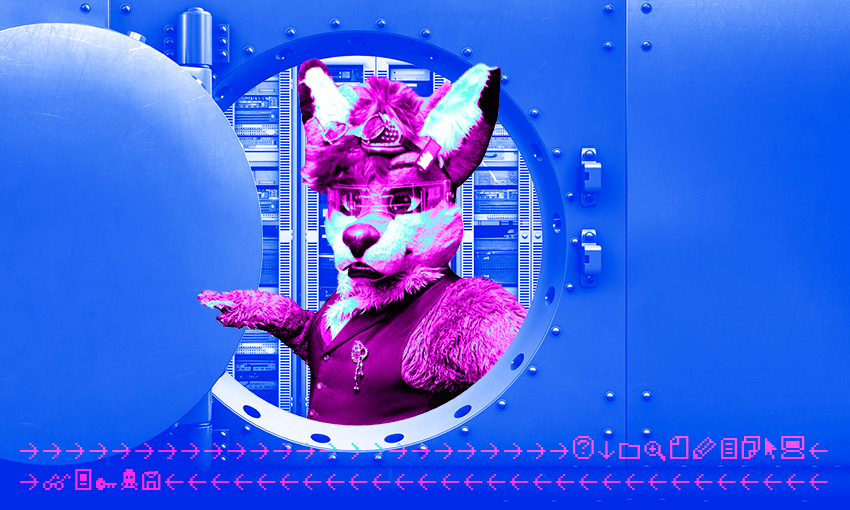 Who runs the internet? Furries

The IT industry is full of people involved in this unique fandom about anthropomorphic animal characters. For IRL, Dylan Reeve meets four furries to explore why this might be.

“Furries run the internet.” It’s a familiar refrain among IT industry nerds on Twitter and elsewhere, but there’s definitely real truth to it, and that’s even the case in Aotearoa.

The furry fandom is a subculture focused around anthropomorphic animal characters. For the most part, the subculture sees people engaging online in message boards and groups, like any other fandom. Just as Swifties congregate online to share images, stories, remixes and products devoted to the wonders of Taylor Swift, furries meet online to share conversation, media and content about, for example, 6-foot tall bipedal wolves.

Many outsiders, if they’re aware of furries at all, assume that the community revolves around little more than an obscure kink. This is simply not the case, according to both insiders and those who’ve written about the fandom. It’s a prejudice that furries are keenly aware of, however, and means many don’t feel comfortable being open about their participation.

Despite the furry fandom’s low public profile, it’s often suggested, and appears anecdotally true, that IT experts are over-represented among the membership of the community. As such, there are hundreds (perhaps thousands) of furries behind the scenes inside communications and technology companies worldwide. Apple, Google, Facebook, Amazon: it’s likely that all of the world’s biggest tech names have furries in key roles.

Put succinctly in one 2019 tweet: “All modern communication would collapse if about 50 people, most of which are furries, decided to turn their pager off for a day”. Or, in another tweet: “I guarantee you the internet would collapse in a most horrific manner if all the furries in the world got Thanos snapped.”

Another recent tweet, in reply to a photograph of dozens of furries together on a flight, imagined a different disaster scenario: “I object to that many Furries being on the same airplane because if there were an accident it could basically cripple the American IT industry in an instant.”

Telecommunications as a whole, which also encompasses The Internet, is in a constant state of failure and just in time fixes and functionally all modern communication would collapse if about 50 people, most of which are furries, decided to turn their pager off for a day. https://t.co/k1UqOv5kpd

I object to that many Furries being on the same airplane because if there were an accident it could basically cripple the American IT industry in an instant.

Things might not be quite as definitive in New Zealand, but we’d still know about it if we lost all our furries in a freak accident, said MJ*, a cloud computing consultant and furry convention organiser. “It would definitely have a noticeable impact,” he told me over the phone. “You’d definitely find a lot of [IT] companies with big shortages in some departments.”

According to MJ, there are even furries in senior management and c-suite roles within well-known New Zealand corporations.

H*, a software developer with “half a degree in computer science, a diploma in IT technical support and a degree in software engineering”, suggested the fandom was widely represented in New Zealand IT. “I am yet to encounter any large IT-based company that doesn’t have at least one of us working there,” they observed during an encrypted voice chat. “Often in senior positions.”

Ember Fox*, a Pittsburgh-based principal software engineer, told me the situation is similar in the US, but on a larger scale. “There are a lot of furries who have a lot of diverse positions in tech,” she told me on a video call. “Furries exist in the entire hierarchy of the tech industry. A friend of mine is CTO at a company, and when I worked at a university I was a manager there, and had a number of student employees who were furries.”

MJ has been in the New Zealand IT industry for more than a decade, and now helps businesses navigate the complex world of cloud computing. Most of his friends in the furry community know what he does for a living, but because of the sexualised public perceptions, the same isn’t true in reverse. “It’s something I wouldn’t hide or deny if it came up, [but] I don’t outwardly share it unnecessarily,” he explained. “A lot of that is because I’m in consulting, and there’s definitely a certain ‘corporate persona’.”

H is similar. “It’s not something I’ll usually mention in my professional life,” they explained. “People in IT tend to be vaguely clued into what communities are like online, but there is a perception about the fandom that sometimes isn’t right.”

This is totally inaccurate, according to the furries I spoke to. Instead, they describe an inclusive and welcoming online community where they feel safe to be themselves. “There’s a large prevalence of queer people in the fandom. One, because it tends to be a very accepting space, and two because it gives people a way of experimenting with their identity in a way that’s safe,” H explained.

Final*, a systems engineer at an internet service provider, explained some of the origin of furry communities online, and their value to their members: “We created our own spaces and websites to gather and be in our communities. That can be safe spaces that we can moderate to make sure that people that are hateful don’t have a voice on the platform. And we can keep it safe, particularly for members of the fandom who are younger.”

But why do so many furries work in IT? There are no firm answers, but the inherently online nature of the fandom probably has something to do with it, according to most of the furries I spoke to. “Being part of the furry fandom, to reach out to other like-minded people you’re spending quite a bit of time on the internet,” suggested Final. “You spend quite a lot of time online, you get savvy at [computing] and you then go and pursue a career in that.”

This strong connection between the furry community and IT also provides networking opportunities for furries. “A lot of the people I know who work in IT, I originally met them through the fandom,” H told me.

“I can’t go to a conference in [the IT] space without it, effectively, ending up as a fur meet-up of some description,” said MJ. “That is literally how I’ve gotten contacts for different aspects of work. And, people will often post about jobs. I’ve recommended people I know from the fandom for jobs, and vice versa.”

For Ember Fox, the idea that her next job might come through a furry connection is very realistic. “I’ve gone to interview for a number of different jobs through furry contacts. The job I’m currently at was through a traditional recruiter, but my short list for other places I’d want to work involve mostly furry people,” she said. “So probably though the furry community would be the most likely vector if I was going to move on from my current role.”

So is it true that the internet is run by furries? Maybe — there is definitely truth behind the idea, the fandom is well represented behind the scenes of the IT world. But don’t worry, we’re all in safe paws.

*All the furries in this story are referred to either by their fursona names or initials to protect their privacy.