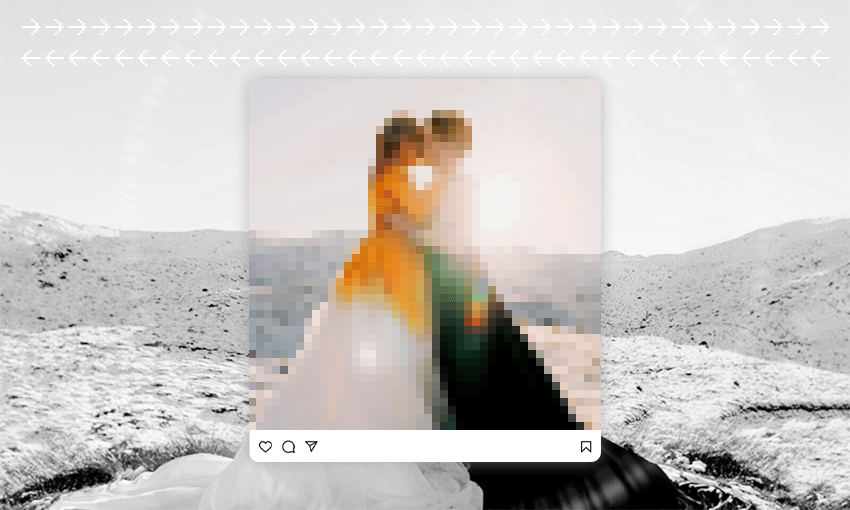 They’re no longer just for loved ones, but demonstrations of intimacy and wealth designed to be shared with the world. Shanti Mathias finds out how the look of a wedding is changing in the Instagram age.

On Instagram, Angela Pan’s wedding looks perfect. At her hen’s party in Auckland, she sports a train of balloons in millennial pink. In a short video, gentle music accompanies an unboxing of her gift boxes for bridesmaids, featuring customised wallet pouches and fluffy slippers. In a crisp white dress, she kisses her new husband Joseph in front of their family and friends.

Pan, a creative director now living in Australia, is one of the approximately 20,000 New Zealanders who get married each year. Most of those people will use social media. Given that the global wedding industry is worth hundreds of billions of dollars, social media is both a lucrative place for businesses that work with weddings and a place for people to perform their happiness.

“I used social media as my planning tool for the entire wedding,” says Pan. She spent hours exploring wedding hashtags on Instagram and seeing who friends had mentioned when posting wedding pictures. She made Pinterest boards for cakes and decor and hairstyles, then shared them with her wedding planner. All the vendors she used at her wedding were found through social media. There wasn’t necessarily much choice; the online wedding industry, just like everywhere else, overrepresents white cishet people. It was difficult for Pan to find makeup artists and dress designs who had experience working with Asian skintones and body shapes.

Rachel*, a Wellingtonian who got engaged to her partner in March, has also been finding inspiration online, but finds herself more sceptical of the “generic” Instagram wedding – flower walls, cottagecore, and unique hashtags. “A lot of that is about status and flexing – it isn’t within my budget,” she says frankly. “The Disney industrial complex tells us that we need these huge weddings, because it’s supposed to be the happy ending.”

Teuila Benoni, a wedding planner with Wedding She Wrote in Auckland, agrees that social media is good for business, as well as helping couples to communicate what kind of wedding they want. “It definitely helps with aesthetic, [especially] if you want a magazine cover wedding.” She pauses. “It can put a strain on budget, though, wanting a whole lot of different things to put in your wedding photos.”

Is the proliferation of wedding content on social media homogenising weddings? Benoni doesn’t think so. Wedding She Wrote specialises in planning for couples of various ethnic backgrounds, many of whom find inspiration to embrace aspects of weddings from their culture online. “You can showcase diverse rituals,” she says. “Ones that haven’t been repeated in your family for a while.”

While Singh stresses that Tinted Photography – who specialise in adventure photography and elopements – make every shoot unique, she also says that photographers and couples have nothing to fear from looking like other people. “Centuries ago, people were saying ‘oh my god they painted the royalty like this. I want to be painted like that.’” Photographers like Singh have to be immersed in trends – and they’re still not sure what the TikTok era of wedding photography is going to look like.

While social media is useful for wedding businesses and the betrothed alike, the connection between the social internet and weddings raises bigger questions about why people get married at all – and why they feel the need to tell other people about it.

“New Zealand isn’t a very religious society overall, so most [motivators] are social, not legal,” says Vivienne Elizabeth, a sociologist who studies family and gender roles at the University of Auckland. A decade ago, Elizabeth published a study on what motivated people in Aotearoa to get married. For most of the couples Elizabeth studied, both heterosexual and queer, a wedding was an opportunity for a joyful celebration with loved ones, although for some, it was important for getting family approval. Couples made very personal choices while planning and presenting their weddings.

Today, Elizabeth sees the trend of personalisation continuing. As long as you meet the bare minimum legal requirements – a celebrant and two witnesses – a wedding can be anywhere, and the vows can say anything. Elizabeth says that “there are a diverse range of possibilities” of what a wedding looks like; it’s part of a broader trend towards individualisation in society.

One thing that remains the same, though, is that people want others to know about their weddings. “We create social proof, show people that you can get this with that [much money],” says Singh when I ask her why people are willing to spend thousands of dollars on pictures of their weddings. “[Social media] has changed how we photograph. People want Instagram moments they can share later,” Lane adds.

There’s an element of comparison, too. “Social media sets bizarre expectations,” says Pan. “You see a photo of an influencer wedding with a huge budget, and you [want] to go above and beyond.” The parts of her own wedding that she has chosen to share online focus on the aesthetic of her wedding, the kind of visual content that performs well on social media.  “I knew my audience would like to see the outfits, the venues, the stationery, the table placements – that’s the stuff I was excited to share,” she says.

But does the visual nature of social media simply reinforce the kinds of pressure and comparison that prompt couples to spend tens of thousands of dollars on a ceremony? It’s well-established that social media creates pressure, says sociologist Elizabeth, and that includes the pressure to share wedding photos. “There’s a requirement to archive and display your own life, [so] you show it in its best light,” she says.

Shared online, wedding photos play an important social role, allowing a couple to perform intimacy with each other, as well as demonstrate who is important in their social circle. Real-world details like invites, selection of a bridesmaids and groomsmen, and table seating positions do this just as effectively as the comments under a wedding announcement post on Facebook or tagging some people – and not others – in photos on Instagram. It all works to the advantage of the multi-billion dollar wedding industry (where most players are small businesses trying to cover costs) as well as the multi-billion dollar social media industry, where massive companies make huge amounts of money from people’s desire to be perceived.

At the end of the day, though, there are parts of the ritual of a wedding that cannot be captured by a photographer or shared online. Pan, who chose to have an “unplugged” wedding where guests don’t use their phones during the ceremony, knows this. “There are moments that stay in your head, not on social media, not anyone’s phone,” she says. She isn’t planning to share her vows or the wedding speeches with her 8,000 followers. “Only the people who were there have that memory – which is what makes it so special.”

*some people’s last names have not been used for privacy.