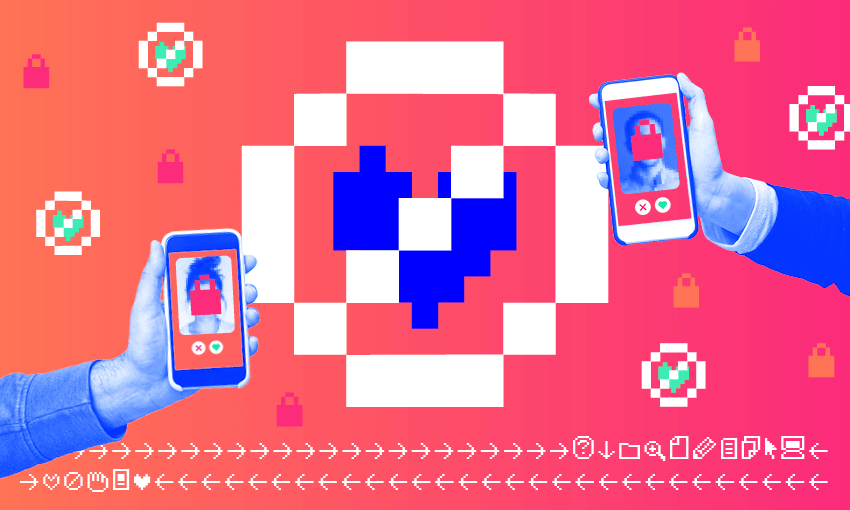 Meet the women banned from Tinder

It takes only one report to shut down a Tinder account. For IRL, Josie Adams speaks to women who feel they’ve been unjustifiably banned from dating apps.

In May of 2018, my time as a Tinder user came to an end. I hadn’t found love, and wouldn’t give up on finding it for a few more years. I was banned.

I wasn’t banned for harassment, nudity, or threats of violence. I was banned for “promotion or solicitation”, ie putting my bank account details in my bio. I made $80 in four hours before someone finally reported me. At least there was a good reason to ban me; I’d actually made money off the app, which is against the rules. But many others, it seems, are banned not just without financial compensation, but also without just cause.

Mary, a Wellington-based communications manager, has been banned six times. The repetition is not because she’s ever managed to get unbanned; she’s just hell-bent on using the app. “You just gotta find a system to work around it,” she says. “I like burner phones and $2 sim cards.”

“I get banned over and over again. Even when I paid once [for premium], I still managed to get banned.”

But why? Was she sending nudes? Using hate speech? No – she just wasn’t replying as quickly as some guys liked. “Tinder can get pretty hectic when you’re messaging 3,000 people in a couple of weeks,” she says, not intending to boast. She describes herself as entering her “filthy 40s”. “People have reported me because I didn’t get back to them, and I always find it quite funny.”

She’s been stalked, had people steal her identity, and had matches follow her to Instagram (her Instagram account was also, subsequently, reported and shut down). But she’s been banned from Tinder more than most, for the simple crime of not replying to a message, or even just continuing to exist after a break-up: “One of my exes has seen me on there twice and he’s reported me.”

Her current profile is basically a parody account; the only image of herself on it has her wearing a balaclava over her face. She’s still very successful. “I’ve had it for about a month and I’ve got about 1,700 matches.”

“I usually get about three or four dates out of an account before it gets banned.”

Helen, a 21-year-old administration assistant, was banned a couple of years ago and still doesn’t know exactly why. She has a theory: “A guy asked for my Snapchat and I said ‘no, I don’t really give that out’.” He was banned soon after – not because of her – and then popped up a couple of days later with a new profile. He asked for her Snapchat again, and she said no again. “Literally 10 minutes after that interaction, I was gone.”

She assumes it was him, but admits she could also have been reported for having an image of internet celebrity Trisha Paytas on her profile, “the one where she’s lying naked on her bed eating pizza”. This could be construed as a breach of the rules around “impersonation”.

When she changed her phone number a year later, she realised she could have another go on the app. She was banned again. “The second time it hurt more because I didn’t know why it happened,” she says. “I think it was because one of my exes saw me. But it could also have been because I’m too hot and Tinder thought I was a bot.”

But Tinder isn’t the only dating app out there. Georgie, a 34-year-old student, was banned from Bumble. “I joined Bumble because I liked the idea of the woman being in control of the conversation,” she says. So she’d start chats with guys who looked promising, only to be disappointed. “I was sick of being abused for calling out their behaviour, or asked for pics after I initiated conversation.” So, after receiving unsolicited dick pics, she turned the guys’ behaviour around on them. “The first guy I messaged back something along the lines of ‘is that a child’s penis? Why are you sending me a child’s penis?’” she remembers. “Then I got my second dick pic about 30 minutes after that.

“Every dick pic I’d get, I’d respond with the penis of the previous person,” says. “Even though I made sure you couldn’t identify the person in the pictures, the boys didn’t like it and I got reported too many times.

“They really need to get a sense of humour. Smile a bit more, am I right?”

All in all she sent about four dick pics, and was banned about a week after sending the first. “I tried to log in one day and got the message that I’d breached their community guidelines,” she says. She’s never tried to appeal the ban.

“I never reported anyone. I should have but figured nothing was gonna happen to them anyway.”

Tina, a 26-year-old graphic designer, had a solid two years on the Auckland dating app scene before being booted off two in one day: Tinder and Hinge. “I tried to log in because I wanted some attention and whatnot, and it just said ‘your account has been banned’. What the fuck?”

She insists her behaviour was always wonderful on the apps. “The worst thing I did was maybe not reply,” she says.

“I’m not on Tinder all the time. I come back to get some attention and I’m banned? You’re not even gonna give me a reason? I need to understand.”

There was a link to appeal the ban, but after giving the process a scan she gave up. It was too much work.

She admits there was probably a reason to ban her from Tinder: “I had a ‘smoking’ photo on my profile. I had some ‘smoking tools’.” But the fact she was banned from Tinder and Hinge (where she had no ‘smoking’ photo) at the same time suggests it might have been one double-apped agent, reporting her profiles.

“Part of me thinks it might have been somebody I was talking to who I didn’t finish a conversation with. But I don’t really think anybody would invest in me that much.”

A spokesperson for Tinder says the company takes reports seriously. “If a member contacts us to report any bad online or offline behaviour, our team carefully reviews the report and takes the necessary action to remove any inappropriate profile from our platform.”

If a member feels it was a wrongful ban, they can reach out to our member support team to ask for a second review.”

Bumble commented similarly, saying it takes reports seriously and investigates each one. While violating its community guidelines is the easiest way to get banned from the app, this isn’t the only tool in its arsenal: “We also remove people from the app due in large part to the safety measures we’ve implemented through AI and machine learning. These safety guards proactively capture bad behaviour to prevent further violations or harm,” says a spokesperson.

“Once a user is banned from Bumble, they cannot return unless there’s a special appeal case presented to our safety support team.”

However, the outcasts I speak with tell me it’s nigh on impossible to get an account back. “I emailed Tinder and they sent back an automated message,” says Helen. “I couldn’t get in touch with them. It seems like poor customer service, because a lot of women are being kicked off by shitty men.”

Some people see having swiped on everyone in their city as “winning Tinder”, but Mary thinks being kicked off the platform altogether is the real win.

“Getting banned is the ultimate end of the game, right?”

Did you meet the love of your life in a strange way online? Have you launched a novel internet career? Have you been catfished or scammed? If you’ve got a great yarn about the internet, get in touch with us at irl@thespinoff.co.nz.