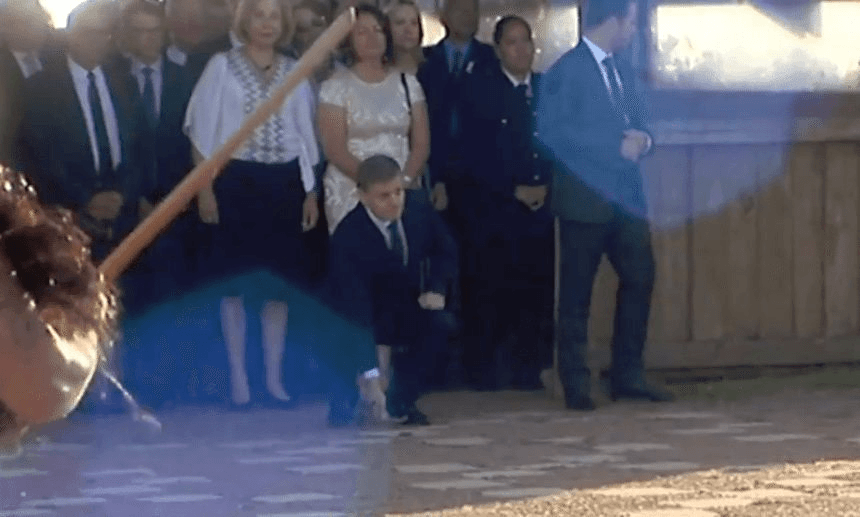 “English chose not to go to Waitangi, preferring to attend a breakfast hosted by Ngāti Whātua Ōrākei. When it came his turn to speak during the powhiri, which was held inside the wharenui, he began with a short mihi and then he said, ‘I want to tell you why I’ve come here, to this marae.’

He said it was because of what had been achieved by Ngāti Whātua and the manner of its achievement. He spoke directly to Joe Hawke, the much-loved Uncle Joe, the man who in 1976-78 led a 506-day protest ‘occupation’ of the very land they were on that day. Hawke sat front and centre across from English, flanked by other kaumātua, many of whom were also protest veterans. He soaked it up.

Jessica McAllen: Trauma layered upon trauma: the fight to turn the tide in Māori youth suicide

In the last two years she has lost six people to suicide.

Five years ago, when Drummond was 10, her sister killed herself aged 15.

Last year, the close-knit group was hit by the loss of yet another friend, who was 16.”

Alex Casey and Duncan Greive: Seven Sharp came back last night and it is not any less weird

“Litter, is it good or bad? To find out, Seven Sharp sent some guy from Instagram to purposefully drop litter in public in front of unsuspecting bystanders. Turns out people think litter is ‘terrible’ ‘bad’ and ‘disgusting’ and that we should all pick it up. Now if we could just figure out this chocolate slice crisis, we could call it a day and all go home to relax on our Tiger Turf.”

Graeme Edgeler: The Citizenship (Western Samoa) Act is New Zealand’s most racist immigration law. Why is it still on the books?

“Wolfmother were a perfect opening act, I enjoyed them a lot more than I thought I would. I did have a moment as they were playing hard when I realised that in just 24 hours I would be replacing the jeans, black top and hard rock for a frock and a brass band at the Royal New Zealand Navy’s Beat Retreat in Waitangi, but for now fists were pumping and they sounded great.”

Peter Newport: The strange story of the 5 million dollar sewer pipe that no one wants to own

“So who pays? The ratepayers of Queenstown or the developers of all these new suburbs that need the water and produce the sewage? Or the new hotels full of the ever-increasing hordes of tourists? Peter Hansby says the developers do make a contribution but much of the eventual bill does end up with ratepayers. Not allowing for increasing council debt, cash reserves, GST or developer contributions etc., that could be the equivalent of $300 for each ratepayer if paid all at once.

This invariably calls to mind the the $53 million Mangawhai sewerage scheme which in 2012 produced a rate rise of around 40% and virtually bankrupted the Kaipara District Council.”

“The Spinoff is Facebook streaming a special candidates’ debate, 7pm this Wednesday, 15 February. They say they’re friends and all that, but each one of these candidates needs a really good showing or they will hurt their party’s chances in the general election in September. But they also need to show they can work together.

So, how do these candidates view the whole identity politics v class politics thing? How are those plans to rejuvenate their caucuses going? Are Labour and the Greens same but different and if so what does that even mean? Does TOP believe a word of it?”

Duncan Greive: Under the Bridge: the story behind the dazzling Herald project a year in the making

“Under the Bridge relied on three separate things breaking her way – Principal John Rohs’ welcome was just one. She also needed the Herald to do something they’d never done before: commission a longform piece of video, one which would take a star reporter away from productive work for weeks at a time, with no certainty of outcome. And NZ On Air would need to speed up the process of extricating themselves from the bleak codependent relationship with the TV networks and take a punt on a relative unknown: longform documentary delivered purely via a news site. The project was commissioned and funded under the previous NZ On Air system, before recent reforms aimed at making it more ‘platform agnostic’.”

Hayden Donnell: Labour is totally unified and everything is fine

“Look, there’s no denying it’s been a bumpy week for Labour. After RadioLive maestro Willie Jackson was lured into the party with a promise of a high list spot at the 2017 General Election, web sleuths somehow unearthed a three-year-old recording of him saying rape victims ‘shouldn’t be drinking anyway’. That turn of events, which nobody could have predicted or planned for, prompted some within Labour to express a range of views about Jackson’s suitability as a progressive candidate. Now some people are saying ‘Labour is not unified’ or ‘Labour is fucked’.

Labour is not ‘fucked’.”

Group Think: Welcome to the world, +HR=E: The Spinoff on the new TV3 logo

“I admit when I first saw it I thought ‘that is a really terrible logo’. The second time I saw it I downgraded my opinion to ‘quite bad’, then to ‘not great’ and so on. Now I think it might actually be good. Please don’t make me explain why; I just want to be on the right side of history.”