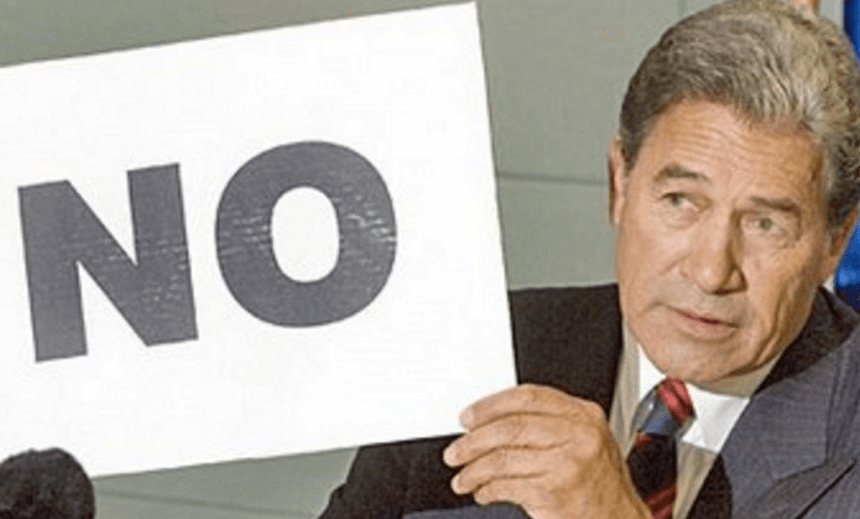 Winston Peters with his ‘no’ sign, used repeatedly at a press conference when facing questions about a $100,000 donation from expatriate billionaire Owen Glenn in February 2008.

Means to an Ends: in praise of ridiculously short press releases

Winston Peters with his ‘no’ sign, used repeatedly at a press conference when facing questions about a $100,000 donation from expatriate billionaire Owen Glenn in February 2008.

Five shining examples that reveal the glories of a super-succinct media statement.

In a world of bottomless coffee, endless online scrolling, and prose that goes on much longer than it needs to, winding circuitously around corners and over bridges, as if crying out desperately for an editor or a blowtorch, much like this sentence, thank goodness for brevity.

Press releases are typically among the worst offenders when it comes to waffle, with their clunky, inauthentic quotes and interminable “notes for editors”. But sometimes, beautifully, laconically, they break the form. Sparked by last week’s effort by Winston Peters, then, herewith an appreciation of Very Short Press releases.

The centuries-young Peter Pan of New Zealand politics reflected hard on news that the moronic “leader” of the moronic “neo-masculinist” group “Return of Kings” was planning a trip down under; he invented a word and put out a press release.

Peters holds the record for the most economical press conference of all time, too; you remember, the one in which he gave a single-word response to all questions on political donations, and did so without even moving his lips.

In 1995, rumours circulated that the basketball superstar might come out of retirement and return to the NBA. He reflected on the matter and put out a press release.

New York Magazine relates an exchange from yesteryear, involving reflection and the putting out of short press releases:

“Back in 1998, when Amazon was just a classic Internet company, full of bits and vinegar, it got into some scrum with Barnes & Noble (more would follow) and issued a press release saying: ‘Goliath is always in range of a good slingshot. Real talk!’ ‘Your company,’ responded Barnes & Noble, ‘is now worth more than Barnes & Noble, Borders, and all of the independent booksellers combined.’ Amazon replied with a memorable one-word press release: ‘Oh.’”

Way back in 2002, the US Democrat Senator Tom Daschle said George Bush’s war on terrorism was a failure as long as Osama Bin Laden was at large. Republican House Majority Whip Tom Delay reflected, found himself to be outraged, and issued a statement reading, in full: “Disgusting.”

In February 2015, when Australian Labor MP Albanese learned that Max Wilton-Moore was standing down as Sydney Airport Chairman, “Albo” reflected hard on his feelings about a man with whom he shared a mutual loathing and put out a press release.