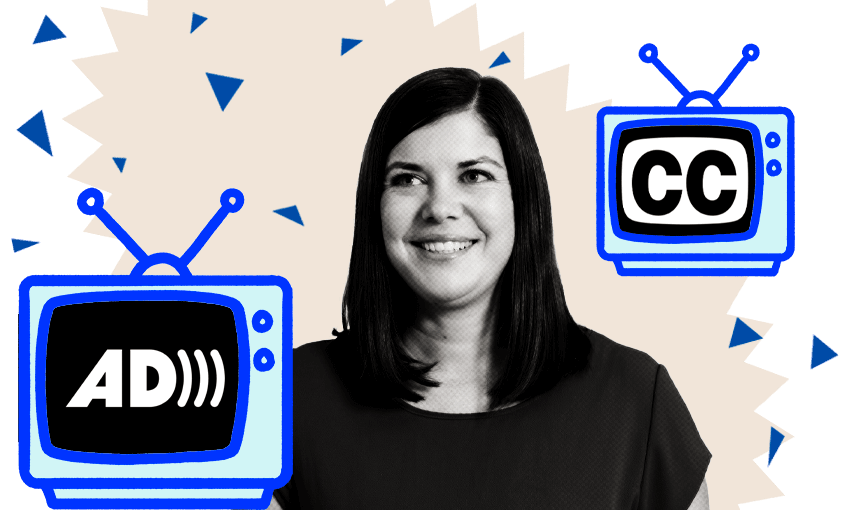 After nine years at its helm, Wendy Youens is stepping down from Able New Zealand, the organisation that provides captioning and audio descriptions for locally made TV. She spoke to Duncan Greive about the job on The Fold.

Since I’ve been doing my media podcast The Fold, I’ve received regular correspondence from people about accessibility, and why I didn’t ask, say, Kevin Kenrick, the former TVNZ CEO, about the ability of TVNZ OnDemand viewers to get the same captioning experience as people who watch on linear.

My guest this week is one of the best people in New Zealand to talk to about that; about what we’re getting right when it comes to accessibility and TV, and where we could be doing better. Wendy Youens is – for another couple of weeks, at least – the chief executive of Able New Zealand, a trust that provides captioning and audio description services for broadcast media.

Below is an edited excerpt of our conversation – read the full transcript of my conversation with Wendy Youens here.

Could you start by explaining what Able is and how it came about? It’s an organisation that might be invisible to a lot of people, but it does an incredibly important job.

Able is an independent, not for profit organisation. We’re fully funded by New Zealand On Air to provide closed captioning and audio description for TV broadcasters, and we have been around for about nine years now.

The services that we provide used to be provided by a department that was nested within TVNZ, and back in 2013 TVNZ went through a process of streamlining their business and focusing on becoming this very commercial sort of machine. TVNZ essentially made the business decision to outsource what we were doing, and we worked with New Zealand On Air to set up able as an independent organisation. We launched back in late 2013 and have been working from Able ever since.

Do you feel like the importance of accessibility is well understood by the media broadly?

Certainly the awareness of accessibility is growing. I think the major media organisations and TV broadcasters – TVNZ and Discovery, Sky or Prime, who we provide services for – they absolutely value and know that captioning and audio description are really important services for a huge number of people in our community.

But I think what’s not happening at the moment is the prioritisation of disability over all the other important things that major media organisations are dealing with. What we’ve found at Able is that generally, media organisations don’t do anything they don’t have to do, and particularly anything that’s going to cost them money. We’re lucky to have New Zealand On Air funding to support Able’s services, but we do rely on broadcasters having the capability to actually broadcast captioning and audio description and that is currently not consistent. At the moment you have situations where you have something that might be captioned or audio described on broadcast TV and then it’s not available on an on-demand platform, for instance.

I’ve heard that a whole bunch of times: the on-demand space, which is where all the gravity’s heading, is actually paradoxically a real lottery as to whether accessibility exists.

That’s exactly right. And the technology is there, so absolutely it’s possible to have captioning and audio description on an online platform. Netflix does it really well, 100% of content on Netflix is captioned and pretty large portion of the content is audio described. So it’s very possible. It’s just that broadcasters have to prioritise that.

Broadcasters currently are not really grasping is the size of that audience. You have 38% of New Zealanders who use captions on a regular basis, and 7% of New Zealanders use audio description on a regular basis. That’s a huge number of people and we actually know that over half of those people are not using it for the obvious reasons. Closed captioning obviously benefits the Deaf and hard of hearing community, but there’s a huge range of other people that use captions as well. People that are learning English, people that are struggling to hear for any reason, people, you know, scrolling through videos on public transport are using captions so that they don’t have to listen to the content.

And so captions actually have a much wider benefit, and the same for audio description. I think broadcasters and New Zealand are still just really only at the very early stages of getting to grips with the size of that audience and that potential audience if they were to make their content accessible.

We’re speaking, I think, a week or two before you finish up as chief executive of an organisation that you essentially started and has been a really defining focus of your career. What it was that drew you to the accessibility space?

When I first started at TVNZ in 2007 [as a caption producer], I had no real concept of captioning and who produced them. I guess I just imagined they were just there, but there’s actually a team of very skilled and dedicated people producing those captions. As soon as I joined the team, I thought, “I’ve found my dream job” and just loved that we were providing a service that made a difference.

As my career has progressed and I’ve moved into more management, I’ve loved the opportunity to connect with the communities that we serve and learn so much about the importance of captioning and audio description to people and to people’s lives. Because the services we provide, even though in some ways it’s providing access to entertainment or news, important information, it’s also just about social inclusion and enabling people that rely on those access services to be totally included in New Zealand television and New Zealand content.

That’s one of the things I love about media: it’s this thing that can, at its best, tie us together or prompt conversation and so on. Is there a particular instance of [that sort of social inclusion] that stands out in your memory?

And it really just reminded me that we’re connecting people with stories, but also stories that connect into their lives, and that’s super important.