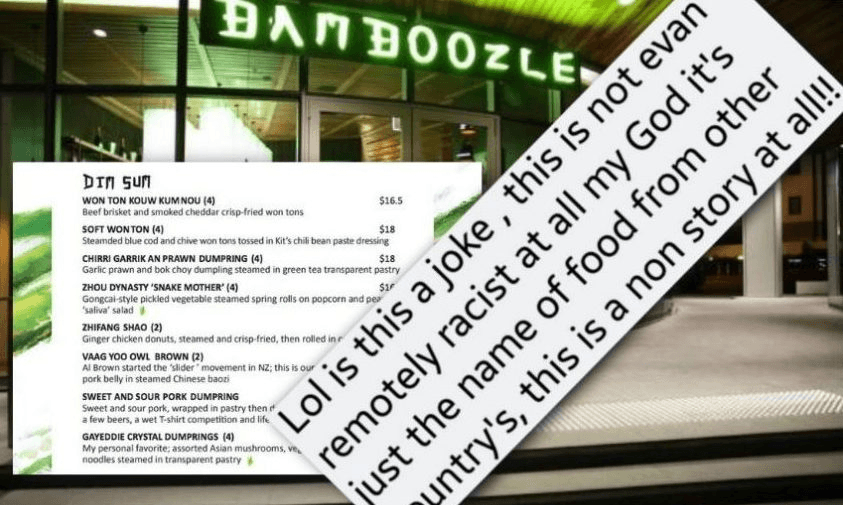 The best of The Spinoff this week: racism and rentals

“Now, before I smash my head into my keyboard out of sheer frustration and exhaustion at having to deal with stuff like this, let’s get one thing clear. This menu is racist. It is. There’s no other way around it. It’s a menu made up of items that are named using generic Asian gibberish that has been used to degrade, discriminate against and dehumanise Asians in western culture since way back – that is literally the dictionary definition of racism. Think it’s just a joke? That’s fine. But it’s a racist joke. A racist joke born out of wilful ignorance with an end goal of having people laugh at Asian people’s inability to pronounce words correctly.

‘But racism in New Zealand was supposed to be fixed, James? What gives?’ Well, apparently not, as there are fans of a restaurant in Christchurch (come on Christchurch, it’s like you’re just trolling us at this point) who are determined to hold New Zealand back from entering the 21st century.”

Calum Henderson: A definitive ranking of all the Blackcaps ODI shirts from best to worst

Someone had to do it.

“It’s been part of a tacit agreement amongst all the major networks to start the year slow, ultimately dating back to the misty past when only men were in paid employment and everyone lived in a tent beside a pristine waterway until January 30 or so.

That era just got blitzed by Three, which has not only returned The AM Show, but last night brought back The Project too, with Ardern and all her star power showing up there as well. Three is clearly betting that it can tempt some longtime TVNZ1 watchers to try something new – and keep them.”

Don Rowe: Going once, going twice: Wellington landlords want every cent you have

“The nightmare that is renting in this country continues to bring new horrors, with reports from Wellington that landlords are explicitly operating tender processes on their rentals in a bid to drive up prices.

Oliver Clifton, a fourth year student at Victoria University, recently viewed a flat on Kelburn Parade: five bedrooms at $1110 per week. On receiving the application forms he was shocked to find the landlord requiring tenants to submit the maximum they’d be willing to pay above and beyond the listed price as the house was in ‘high demand’.”

Anonymous: I’m a civil servant and I can no longer afford to rent in Wellington

“I have been living in Wellington since 2010 and I have been left homeless four times during my seven years here. Despite being a professional civil servant in my mid-twenties, things aren’t getting any easier for me. I have decided to jump ship and move to Dunedin after my lease runs out.”

Branko Marcetic: The trouble with that ‘in defence of Trump’ column

“A lot of people will hate the column in yesterday’s Herald on Sunday column, which purported to explain ‘why Trump’s first year hasn’t been that bad’, for a lot of reasons. Not least that it exemplifies two of modern media’s most obnoxious tendencies – a thirst for click-inducing contrarianism and a striving for a self-defeating style of faux-objectivity – which together create a perfect storm of misinformation.

Heather du Plessis-Allan’s column is trailed on the front page of Sunday’s paper as “In defence of Trump: Why The Don ‘aint so bad’, (as an aside, that “‘aint” is a horrible typo). But the argument itself is framed, crucially, not so much as a defence of the president but as simply an objective recounting of facts that point to why Trump may well cruise to victory in 2020. In the process of doing the latter, it contorts the facts so heavily it winds up doing the former.”

Kristin Hall: RIP Stage Challenge, where the non-sporty kids got to shine

“We are but two weeks into 2018 and already we have a definite sign that this cruel world is going to continue its speedy downward trajectory until there is nothing pure and good left. I am, of course talking about the loss of Stage Challenge.

News broke today that the institution which has seen half a million Kiwi teens kick-ball-changing to their little hearts’ content for 25 years is no more, and I’m going to tell you why that’s a bloody fist-shaking outrage.”

Graham Cameron: Matakana Island visitors are being disrespectful and dangerous. Māori have every right to protest

Blockades barring people from using a wharf on Matakana Island in the Western Bay of Plenty have drawn the ire of visitors and tourist operations, with some accusing local hapū of “taking the law into their own hands.” Tauranga Moana local Graham Cameron defends their kaitiakitanga and challenges views on land use and ownership.

“I want to be clear: I think menstrual cups are great, and I use one myself. I am the person behind Go With The Flow Hawke’s Bay, a not-for-profit organisation that provides menstrual products to those who can’t afford them. And while I personally stopped using disposable products a few years ago, I still provide them for others. This means I often have to defend what I do.

My commitment to continuing to provide disposable products, when in theory one little menstrual cup could solve everything forever, comes down to one thing: Choice.”

Alex Casey: The bleakest moments from the return of The AM Show

“Awful. Hopeless. Horrible. These are just some of the words Duncan Garner used to describe his sleep last night, the eve before the return of The AM Show online, on radio, and on telly for 2018. Falling down the stairs at 5.59 this morning to watch the morning show – one which has a week’s head start on TVNZ’s revamped Breakfast – I can tell you that absolutely nothing has changed for the new year and I don’t really know why I did it.”