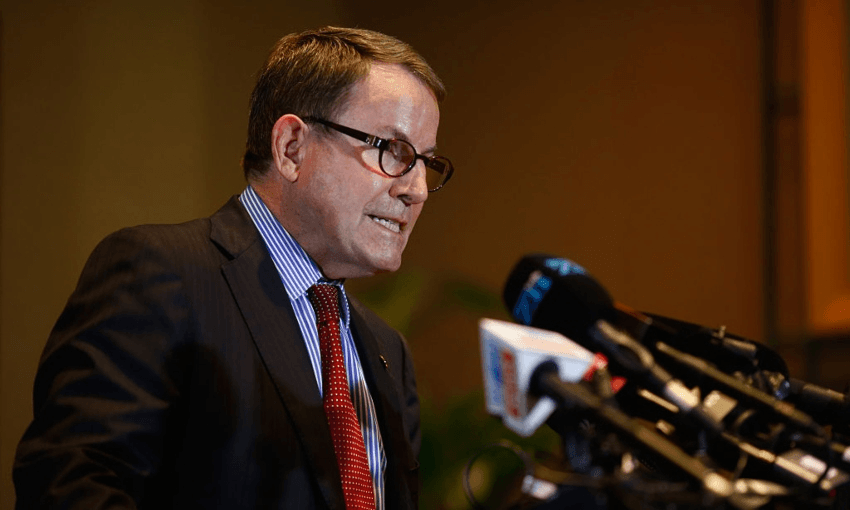 Vodafone and Kiwibank have suspended advertising on the radio station and its website as talkback host John Banks is taken off air after yet another racist outburst. Alex Braae reports.

In an alarming segment of talkback radio, former Auckland mayor John Banks endorsed the views of a caller who described Māori as a “stone age people with a stone age culture”.

The comments have prompted major advertiser Vodafone to announce that it suspending advertising on the station.

Yes, we’re suspending advertising with Magic Talk, and we will be discussing our longer term approach with our partners. ^Ahmed

Banks, who has also been an MP and had a long career in media, is currently filling in for Peter Williams on Magic Talk’s morning show. After the original publication of this story, a Mediaworks spokesperson subsequently gave an update that Banks would not be on air over the rest of the stint, which would instead be filled by regular nighttime host Leah Panapa.

The comments were made on Tuesday’s show, and were captured by a TikTok user, who posted a video of them being made.

A caller, identified as Richard, said that Māori were “victims of their own genetic background. They’re genetically predisposed to crime, alcohol, and underperformance educationally.”

With Banks declining to interject, Richard continued, saying he was not interested in learning about, or having his children learn about “their stone age culture.”

The wording reflected similar comments made by Banks in 2011 on TV show The Nation, while he was running for parliament for the Act party.

“If we continue the bankrupt response of just paying young Polynesian, young Māori men in South Auckland, the dole to sit in front of TV, smoke marijuana, watch pornography and plan more drug offending and more burglaries, then we’re going to have them coming through our window regardless if we live in Epsom or anywhere else in the greater Auckland,” he said at the time.

Māori Council executive director Matthew Tukaki was disgusted by the comments, describing the sentiment behind them as similar to the racist ideology that led to the Christchurch mosque attacks.

“At the end of the day, Māori culture was rich and strong before anyone else came along,” said Tukaki.

Magic Talk drive host Ryan Bridge was one of the voices condemning the comments, saying they “made my skin crawl” in a video posted on Instagram.

“I just wanted to let our Māori listeners more than anyone know that that kind of shit shouldn’t have been aired, or it should have been challenged.”

This is one of the most shocking things I have heard. No fan of John Banks but this sort of shit has to be squashed and called out for what it is pure RACISM #givenothingtoracism https://t.co/QZrjuJnW7E

This has made me physically sick.

This fucking radio station needs to be shut down.

Banks issued an apology on air today, saying he had not picked up the comments made by the caller, and that the caller’s comments were wrong and racist.

“I also made some generic negative statements about Māori people and practices that could have been misconstrued as racist. And I apologise for that, it’s not my intention. I’m not racist. I’m not racist,” said Banks.

But despite the apology, Tukaki said it was time for him to go from the airwaves.

“The time for letting sleeping dogs lie is well and truly over. If anyone out there in the public wants to complain to the Broadcasting Standards Authority, that is their right to do so,” said Tukaki.

“But at some point, we need to draw a line under this. We give these people relevancy by giving them a voice on a network that allows them to perpetuate the myth that somehow, a culture or a race is subservient to a master race of some description.”

Banks has also faced fines for saying racial slurs on air by the Broadcasting Standards Authority, after describing Italian America’s Cup sailors as “greasy” and “snivelling little rats”, and saying Māori were “natives who have nothing better to do than wave spears on television” in 2000.

In a statement, a spokesperson for Mediaworks said, “We recognise comments broadcast yesterday during a call discussing the departure of Oranga Tamariki’s CEO were hurtful, and today John Banks unreservedly apologised on air for these.

“John is filling in for Peter Williams who will be back on air next week.”

This story was updated at 4.05pm with the development that Banks has been taken off air.