It’s easy to sacrifice John Banks. It’s a lot harder for brands, sports organisations and government to truly stop funding racism. Are they willing to try?

Yesterday John Banks, the former Auckland mayor and MP, became subject to one of the fastest firings in media history when audio covering his approving response to a racist call into his Magic Talk show was publicised, first on TikTok, then in Alex Braae’s report for The Spinoff. Within the space of a few hours, blue-chip corporates like Vodafone and Kiwibank pledged to stop advertising on the station, and NZ Cricket said it would review its commentary contract should action not be taken.

By the time NZ Cricket released its statement, Banks’ fate was already sealed – he is now off-air, and will in all likelihood never be on it again. To summarise those whiplash hours: appalling statement is made, appalled reaction ensues, appropriate action is taken. End of story? It shouldn’t be. Because Banks’ comments were not some aberration from a fill-in host, they were strategy revealed.

Magic Talk rose from the ashes of RadioLive, itself founded to challenge the dominance and access some of the extraordinary cashflow of the monster that is Newstalk ZB. It’s part of a massive nationwide group of both AM and FM frequencies owned by MediaWorks, one of the two major radio networks (along with NZME, which owns ZB) that dominate commercial radio in New Zealand.

RadioLive was not without its controversies, most notably a chilling interview with one of the victims of the Roastbusters, by former Auckland mayoral candidate (what is it with these people?) John Tamihere and current Labour MP Willie Jackson. Yet it also had liberal-minded hosts like Alison Mau and Marcus Lush, and positioned itself as a more moderate, even centre-left vision for talkback.

Given the dominance of RNZ for that audience, it was always debatable whether there was a market there to be taken. When it was finally shut down two years ago, it wasn’t just a rebrand – it came out from under Newshub control, and was fully integrated into the MediaWorks radio family. And it tacked hard to the right.

Its flagship signings were Sean Plunket and Peter Williams. Plunket was fresh off a chaotic term as campaign manager for TOP, and as David Farrier shows in today’s Webworm, his time at Magic Talk has been studded with incidents which, while not quite reaching Banks’ league, are nonetheless well outside of what you’d think any corporate advertiser would want to sit alongside. Williams has called climate change “nonsense” and was regularly conspiratorial regarding the Covid-19 response. 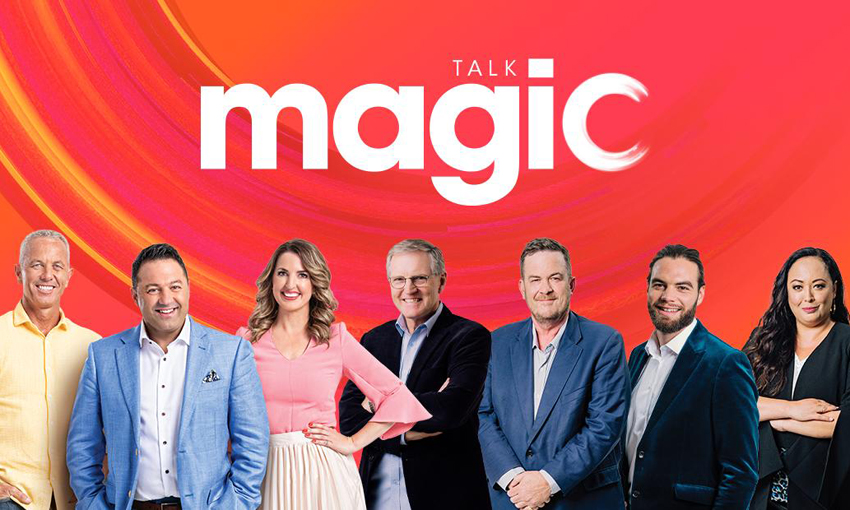 Banks was just doing his job

All of which is to say that Banks was not hired despite his views – he was hired because of them, and what happened on Tuesday was not an accident, it was inevitable, and in effect deliberate. And, it should be clear, unless there are more changes made, it will absolutely happen again. It’s a consequence of the format and the hosting decisions, and has brought Cam Wallace, MediaWorks’ new CEO, his first major headache.

Wallace has come to media from a very well-regarded term at Air New Zealand, and I’ve been impressed by his thoughtfulness and the sophistication of his analysis of the media business. There is no doubt in my mind that he would have found Banks’ views utterly repugnant.

He now has to decide what to do about the station as a whole – whether to try and restrain some of the more objectionable hosts, or ease them out, or simply rip it up and start again. How that goes will be instructive about the way he intends to run a newly slimmed down and focused MediaWorks – a radio and outdoor business – free from the longtime dominance of television and Three.

Yet this is not just a question for Wallace and his board. It’s a question for us, for New Zealand. Because the views espoused by Banks and his caller, dismal as they are, remain out there and available on any number of platforms. His axing doesn’t change that.

For those who helped make it happen, particularly the advertisers and sports bodies, a bigger question lingers: how strongly do they feel?

Talkback is at its best a lively format that provides different, ordinary voices and engaging accessible debate. But while talkback and its callers and hosts semi-regularly create moments like this, audiences are older and further from the centre of society’s gravity than they once were. The role of talkback (and letters to the editor, another place which can reveal the overt racism of segments of society) is as a place for people to speak to large audiences with minimal mediation. This function has largely been taken by social media.

As Janaye Henry reported for The Spinoff last week in a story detailing the unmediated racism rife on official police Facebook pages, social media is a cesspool. It is also the prime minister’s favourite communication tool and is full of brands and government agencies spending billions to reach New Zealand audiences. Facebook and its siblings are wildly profitable, precisely because they moderate even less frequently and carefully than Magic Talk.

So while I am thankful that Banks is off the airwaves, taking his abhorrent views of tangata whenua with him, there remain unanswered questions. For those who employed him in the first place, knowing his views: is he the problem, or is it the station’s whole conceit? And for the institutions which flexed their financial muscle to swiftly evict him: how deeply does the commitment not to coexist with racism run?