The NZ Superannuation Fund has divested from five Israeli banks due to their suspected involvement in illegal settlement construction. Michael Andrew reports.

The Guardians of New Zealand Superannuation, an autonomous crown entity and manager of the multi-billion NZ Super Fund, has divested from five Israeli banks due to their funding of settlement construction in the Occupied Palestinian Territories – otherwise known as the West Bank and Gaza Strip.

The NZ Super Fund said there was “credible evidence that the excluded companies provide project finance for the construction of Israeli settlements… which is an integral aspect of settlement construction.

“We believe that without the banks’ involvement the settlement activity would not be proceeding at the scale seen in recent times,” the Super Fund said.

Israel has occupied the West Bank – home to at least 2.1 million Palestinians – since 1967, and has embarked upon a policy of settlement construction which human rights groups have labelled “de facto annexation“. The vast majority of the international community considers the settlements illegal under international law, though Israel and the US under the former Trump administration have rejected this interpretation.

The NZ Super Fund says its investments in companies, sectors or countries were based on its Responsible Investment Framework, which is guided by the UN’s principles for responsible investment, domestic and international law, and the policy positions of the New Zealand government.

The fund’s decision on the Israeli banks cited this rationale document, along with both the 2016 United Nations Security Council resolution, which demanded a cessation to the settlement activity, as well as the New Zealand government’s 2020 statement: “New Zealand is a long-standing supporter of Israel’s right to live in peace and security. However, successive New Zealand governments have also been clear that Israeli settlements are in violation of international law and have negative implications for the peace process.”

In its press release, Guardians of New Zealand Superannuation said that “based on the information available to us, the companies’ activities are inconsistent with the UN Global Compact, the key benchmark against which the Guardians measures corporate behaviour, and engagement with the companies is unlikely to be successful.”

It added that the holdings in the five banks amount to $6.5m, a sum that would not have a material financial impact on NZ Super Fund performance. 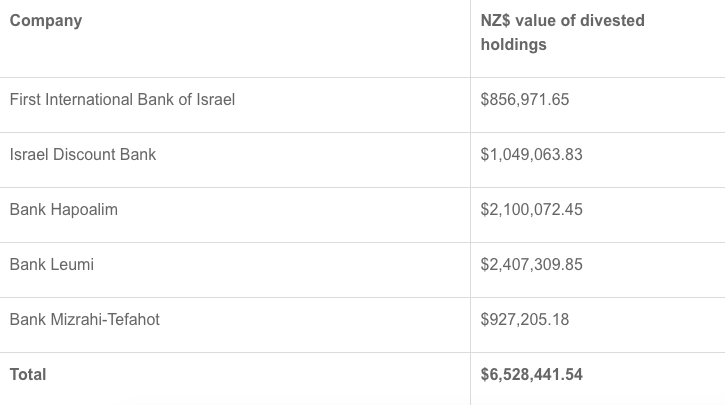 Green Party MP and former international human rights lawyer Golriz Ghahraman said the Green Party welcomed the decision by the Guardians of the Superfund, which “exemplifies compliance with domestic and international in terms of investment in Israeli occupied Palestine, which all NZ institutions and companies should be meeting.

“Our nation’s values and legal obligations have been long in breach by investments facilitating what the UN has consistently called an illegal occupation, causing the suffering of the Palestinian people, and leading to a number of other breaches of humanitarian law.”

Ghahraman said the decision could also set an ethical example for other New Zealand businesses involved with hostile powers or operating in conflict zones, citing in particular Air New Zealand’s military assistance to the Saudi navy and the Super Fund’s investment in so-called “blood phosphate” interests in Western Sahara.

“The action taken by the Super Fund is a great precedent in terms of what should be required of all our financial institutions and companies – to divest from investment in war and human suffering, which are not only harmful to New Zealand’s reputation, but actually breaching our domestic and international law.

Ethical investment and fund manager John Berry said financial institutions and banks are increasingly aware about the impact of their investments, especially when they undermined global sentiment or international law.

“You would not want to be a bank caught out with substantial loans to an industry with a question mark about its future,” he told The Spinoff.

He said the NZ Super Fund is seen as a global leader in the “responsible investment space”.

“It tries not to make ethical or moral calls on what to invest in or not invest in, but takes cues from New Zealand public policy, international treaties and the United Nations Principles of Responsible Investment framework.”

The Israeli Embassy in Wellington has been approached for comment.