In 10 x 100, we survey a group of 100 people via Stickybeak and ask them 10 questions. So far, we’ve quizzed Wellingtonians and holiday motorists. This time, as they reached the end of a week at alert level three, we asked Aucklanders how they coped with yet another stint stuck at home.

Aucklanders have had a time of it lately, subjected to two level three lockdowns in the space of a few weeks while the rest of the country basked in the relative normality of level two. Has it taken its toll, or was the return to locked-down living like putting on a pair of comfy old slippers that had been lost under the couch for a few months? Towards the end of the week at level three, we surveyed 100 Aucklanders, targeted via social media geolocation, about how they were doing. A reminder: this survey is not statistically representative of the entire population of Auckland.

While some of us donned a dressing gown the minute Jacinda uttered the phrase “alert level four” back in March 2020, others made a point of brushing their hair every day and putting on pants for the daily Zoom. A year and a bunch of lockdowns on, surely fatigue is setting in even for the most impeccably groomed of Aucklanders? We asked respondents to rate their standard of dress and grooming during the most recent lockdown on a scale of 1-5, with 1 being “black tie” and 5 “slovenly”.

Just over half gave themselves a solid 3, with nearly one in four pretty bloody rough at 4. A hearty “well done sir” to the 2% who dressed in black tie for the entire week.

Following on from dress and grooming, we asked Aucklanders about their showering habits during lockdown. Why bother if you’re barely leaving the house, right? Wrong, according to the 79% who kept up their regular bathing over the week. A fairly decent chunk admitted to letting it slide a little, with just a handful using that extra time to ensure they were squeaky clean.

Unlike the horror days of alert level four when our beleaguered nation suffered through five weeks sans KFC, level three allowed takeaways – as long as they were collected in a contactless fashion. Anecdotally, some Aucklanders made the most of this, Uber Eatsing their way through the week, but not so our sample, 55% of whom reckoned they didn’t so much as glance at a takeaway menu. Just 7% reckoned they had more than usual, with a fair chunk scoffing the same amount or less than they usually would.

Did the uncertainty and boredom of lockdown turn us to the bottle? Perhaps for a few, with 8% drinking a bit more and 3% heaps more, but four out of five people reckon they drank the same as they usually would, or none at all. It was only a week, after all. During the seemingly eternal level four lockdown last year, by comparison, one in five were drinking more than usual, according to a Te Hiringa Hauora/Health Promotion Agency survey.

What about exercise? Did Aucklanders use the week at home to get shredded? A modest 13% may have done, but for most it was yeah nah – nearly half our respondents did “about the same” amount of exercise as usual, with almost one in four doing less and 17% giving it a miss entirely.

Remember level four, when a courier delivery was often the most exciting thing to happen all week – even though we could order only essential goods like single-origin coffee beans, $700 cashmere dressing gowns and vibrators? A week apparently wasn’t long enough for that mood to set in for the vast majority of us, because only 11% said they shopped up large on the internet.

During peace times, leaving one’s home to go to work or the pub or the gym or whatever provides welcome respite from the drudgery of interacting with one’s housemates, but lockdown takes all that away. What’s left can be confronting. Do I hate my husband? Is my flatmate a reptilian shapeshifter? Does my dog think I’m a dick?

Only 8% of those surveyed detected a souring in household relations during the latest lockdown, however, with 60% seeing no change. For another 8%, being stuck at home rekindled some form of domestic affection, while almost one in four had only their relationship with their own self to work on.

Is your life spent staring at a medium screen while scrolling through a small screen and rewarding yourself with occasional periods of gawking at a slightly larger screen? Same, and not just in lockdown. Nearly half of our respondents had square eyes no more than usual during level three, but the screen-time reports of 40% trended upwards. Word cloud time again! This time we asked for one word for the worst thing about level three. In first place was “nothing”. Really? Maybe they meant “nothingness”, because it was followed by variations on “boredom”, “boring” and “bored”. “Loneliness”, “alone”, “lonely” and “isolation” also got a few mentions, while a few people said “thinking” (I hear you), and “kids” (parents everywhere hear you). 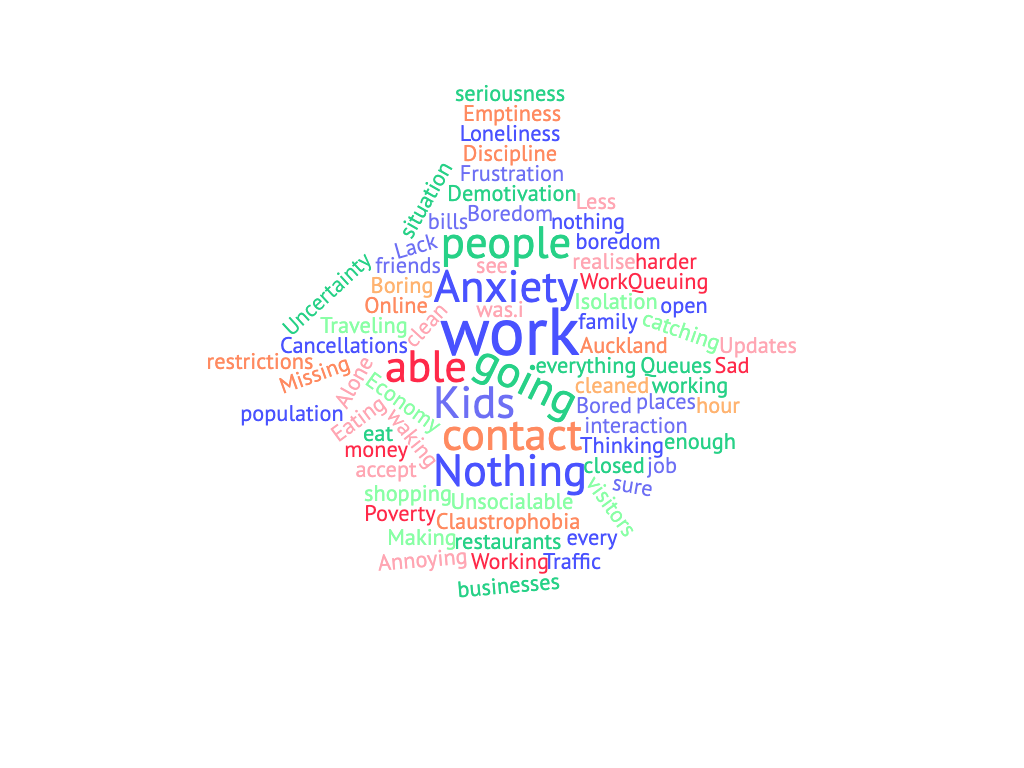