Jihee Junn crunches the numbers on a recent study comparing the biggest players in the meal kit game.

As a single, childless individual who doesn’t really mind filling up on five bowls of oatmeal a day, I can’t say I’ve ever been one to fully embrace the meal kit movement. But I know that for a lot of families, cooking the same meals, or having takeaways every week, just isn’t a viable option. My ever-exhausted sister and her busy husband, for example, have three young kids who won’t eat anything consistently unless it’s chocolate, fries or pizza. Eating out – even if it’s at McDonald’s – somehow always manages to cost them a small fortune.

It’s no coincidence that meal kits have found a lucrative niche among families like theirs. When the concept first took off in Sweden in the late 2000s, they were designed precisely with the modern family in mind – one where both parents were at work full time. Made to marry our desire for fresh, healthy home-cooked meals with our increasingly busy, convenience-driven lives, it didn’t take long for the concept to gain traction, spreading across the continent to central Europe and, by 2012, the United States.

Around the same time meal kits were taking off in the US, the idea had also made its way down to Aotearoa with the launch of My Food Bag, co-founded by celebrity chef Nadia Lim, in 2013. A few years later came the slightly more gourmet service Woop (which stands for “world on our plate”, in case you’re wondering), followed by Bargain Box, a more budget-friendly option launched by the My Food Bag team. Then, in 2018, saw the arrival of HelloFresh – the German meal kit juggernaut which, in less than three years, has managed to gobble up a large share of the local market. With Covid-19 lockdowns supercharging the growth of meal kit deliveries, My Food Bag, Woop, Bargain Box and HelloFresh have all had plenty to celebrate over the last two years. More people than ever are trying out these “essential services” in lieu of supermarket chaos, and while they all share the same business model, they do have important differences, highlighted in a recent study by consumer-focused research website MoneyHub.

Over the course of six months, the team subscribed to the four largest and most popular meal kit delivery companies in New Zealand, consuming more than a 100 different meals for a side-by-side comparison of almost every detail you could ask for including cost, cooking time and packaging waste (taste, unfortunately, was deliberately omitted as it was deemed “too subjective”). We’ve summed up their key findings on which company did well in which areas. To read all the details and see photos from every meal, head to the MoneyHub website.

Other than Bargain Box, which offers just two types of plans (classic and vegetarian), the remaining three all offer meals tailored for gluten-free or health-conscious diets, as well as a plant-based plan from My Food Bag using entirely vegan ingredients. All three also have options that let you pick from a selection of recipes from different plans instead, with HelloFresh having the widest selection of recipes (more than 20) to mix and match every week.

But if you’re just wanting to get the most value for your money, Bargain Box is your best bet, especially if you’re feeding a big family or prefer having multiple servings on hand. Designed to cater for the largest number of people out of all four services, a regular plan with five meals can be as low as $6.30 per plate for six people ($190 per week), $7.30 per plate for four people ($140 per week), and $11.50 per plate for two people ($115).

Remember: meal kits are designed so that the bigger your order (more servings, more meals), the cheaper it works out per plate. 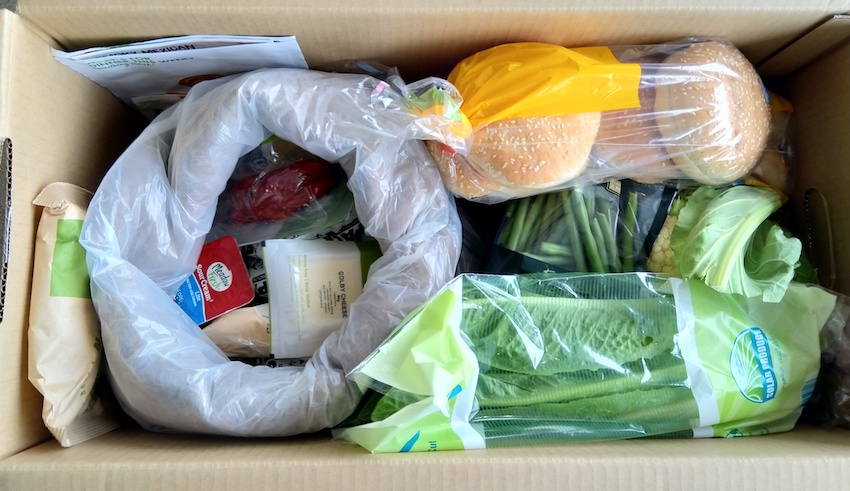 HelloFresh (inclusive of its $10 delivery fee) ranks second in the price-per-plate stakes. But with more than 20 recipes to choose from compared to Bargain Box’s eight, HelloFresh offers far more choice for just a few dollars more, especially if you have any dietary requirements. It’s worth noting, though, that if you’re in the South Island, an extra $5 delivery fee applies.

Most of Woop’s packaging is made from materials suitable for kerbside recycling, but Woop also lets you return all your packaging to the company directly (granted it’s completely clean, dry and free of all food residue), which it collects at your next order and properly recycles. This includes things like soft plastics, as well as gel-cool packs that get sanitised, frozen and reused for other Woop deliveries. 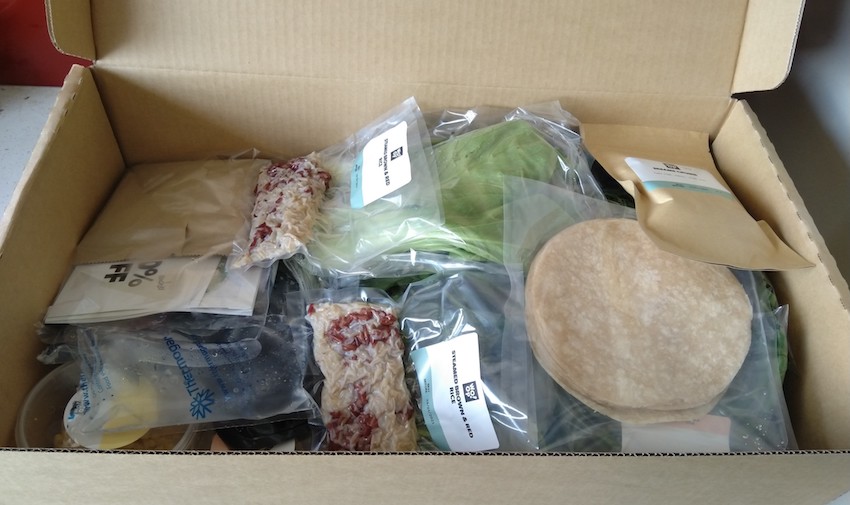 When it came to actually making the meals, the comparison found that preparation and cooking (conducted by one person) took far longer than any of the estimates provided by all four providers. Based on the recipes used during the comparison, the actual time it took to make the meals, on average, ranged between 20-30 minutes more than the average estimated times. Of course, this is all dependent on the speed and skill of whoever’s doing the work, but if you’re an average home cook, it’s safe to say it’s probably going to take a bit longer than what any of these companies seem to think.

Between the four companies, however, Woop’s pre-made sauces and sometimes pre-cooked vegetables meant its recipes were the fastest to prepare, with an estimated time of 23 minutes on average, or around 40 minutes in reality. My Food Bag and HelloFresh (not including its “fresh and fast” recipes, which only take 15 minutes) were the second and third quickest respectively with an estimated time of 37 and 40 minutes on average, or around 55 and 60 minutes in reality. Bargain Box’s meals ended up taking the longest, with its 35-minute meals taking closer to 65.

Two Bargain Box meals made during the study, which on average took much longer than promised (Photo: MoneyHub)

Meanwhile, if you’re the sort of cook who needs all the help you can get, the comparison found HelloFresh’s recipe cards the best of the bunch. Their detailed instructions had pictures of all the ingredients and each step of the cooking process, as well as a list of utensils needed and suggestions for whether you should cook a certain dish earlier than others. The ingredients for each dish are also packed into individually colour-coded paper bags, making it easy to sort what you need every time you cook.

Which one is right for me?

No one company does the best in everything, and they all have their individual weaknesses. For example, Woop only delivers to certain cities, HelloFresh charges extra for the South Island, Bargain Box has little for those with dietary requirements, while My Food Bag often requires more uncommon pantry items like wholegrain mustard, rice vinegar and cornstarch. It’s up to you to decide what’s important and what isn’t, but here’s who each service MoneyHub reckons would suit the best.

“Best for people in large cities (because of their delivery areas) and plans for one person. Their estimated preparation time is consistently lower than the other companies, and while we didn’t necessarily complete the meals in the estimated time, they were ready quicker than with the other meal providers we tried. All their plans use great quality ingredients but we especially liked their ‘Foodie’ plan as it’s the only gourmet option in the market available for one, two or four people.”

“Best for people without much cooking experience because the recipe cards are very detailed and the app helps, too. [It also has the] widest selection of recipes to choose from, plus you get access to the HelloFresh cookbook with thousands of recipes. They offer especially good value for low-calorie and vegetarian recipes.”

“Best for weight loss plans and plant-based recipes, but many plans are available. Wide availability throughout New Zealand (according to their website, it delivers to 86% of New Zealanders). We found they use more adventurous seasonings than HelloFresh and Bargain Box, but also tend to require more pantry items for their preparation.”

“Best for the budget-conscious, families with more than four members or fussy eaters, as recipes tend to be Kiwi classics.”