For two decades, under both National and Labour governments, housing costs have risen far faster than wages. Here’s a horrific graph that shows by just how much.

Last Thursday saw the first of what will no doubt be dozens of housing-related set pieces from Labour, wherein they announced 8,000 public and transitional houses. Or, as has been unkindly but accurately noted by opposition parties, “re-announced” them – just saying where they would be located, having already told us about them in May of last year. The headline on Stuff’s analysis sums the situation up pretty well:

Yet Labour is in a real bind here, because while 2020’s extraordinary 20% year-on-year price rise is an unmitigated disaster for anyone trying to save a deposit for a home, it’s also partly why Labour remains so enormously popular.

Sure, the government was re-elected thanks to its successful pursuit of an elimination strategy – but far from a headache, rampant house price inflation is actually a political gift for any government.

This is because despite home ownership being at its lowest level since the 1950s, 64.5% of households are owner-occupied. So nearly two-thirds of the country feels significantly wealthier after the house price chaos of 2020.

The flip side is that for the other third, life is increasingly desperate – it’s not just the renting, it’s the prospect of renting forever. And no amount of housing press releases from the government will change that. As Act deputy Brooke van Velden acidly put it, “New Zealanders can’t live in a re-announcement”.

To be fair to Labour, they’re hardly alone in watching as house prices and rents gallop away – it’s a trend of at least two decades’ standing, with only relatively brief respites. And it’s one which, for all the critiques of the opposition, is truly apolitical – it happens under Labour and National alike.

Each of the main parties shares something else in common: that for all their concern at runaway prices, none will ever admit the cost of housing might need to come down. All we ever get is an expressed desire for prices and rents to stabilise, to stay flat so that wages might start to catch up.

Yet this stubbornly refuses to happen. We’re now living in a country where both house prices and rents have completely decoupled from wages. I looked back at 20 years of rises in house prices, rents and wages, and overlaid them on the below graph. What it shows is clear and unambiguous: that wages have trailed rents markedly, and been blasted into irrelevance by the rise in house prices. 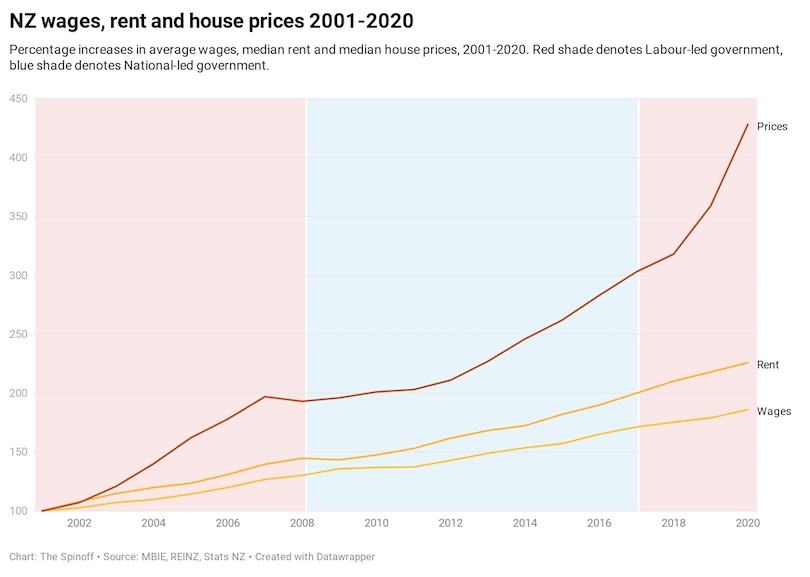 Let’s go through the three categories, starting with wages. For most New Zealanders, particularly those who don’t own homes, this is their key source of income. They have risen 86% since 2001, in a steady, linear fashion. A key thing to note is that the supply of workers has been a major concern of governments, which have imported tens of thousands of workers to ensure that demand does not outstrip supply – which would lead to the horrors of wage inflation – and that the price of labour remains remarkably stable. (It goes without saying that there has been no such urgency around ensuring that those workers have somewhere to live – that the supply of housing matches the demand for it.)

Next comes rent, which tracked relatively closely with wages for the first decade, before spearing off markedly in recent years. It’s up 125% over the same period. Think about this, though – it’s not a small thing that rent has risen at 1.5 times the pace of wages in just 20 years. Because working New Zealanders are more likely to be younger, they’re also more likely to be renting, and therefore devoting a significantly larger proportion of their income to rent than they were 20 years ago.

This should be scandalising – it’s completely unsustainable, and leads to people making awful choices, cramming into unsuitably small dwellings, with all the long-running health and educational outcomes that implies. It also means that our most vulnerable, those at the margins of the housing market, are simply locked out – ending up homeless or in temporary housing like motels, which were previously places for travelling families to stay on holiday, but are now increasingly where desperate families end up living for months or years.

The disproportionate increase in rents would be headline news were it not for it being blown away by the vertiginous rise in house prices. These have decoupled from earth, from reality, from the time-space continuum, to be up over 300% over the same period. They have risen hard and fast and consistently, to the point where saving for a deposit on a home must seem like an exercise in futility if not outright fantasy.

That this is a moral outrage is no longer something anyone sensible debates. Yet what is far less commonly discussed is just what a terrible thing it is for New Zealand’s economy. Housing has become a parasite that consumes ever more of the pay packets of younger and browner New Zealanders. It’s bad for business, which is competing for less and less of the pie – and should probably be more aggressively lobbying the government to build. It’s much worse for those who find themselves handing their pay rise (and then some) to their landlord each year.

The political calculus still says not to fix it: yes, it’s unfair and unsustainable, but making 65% of the country feel richer (let alone the vast and largely untaxed wealth gifted to the small percentage who are landlords) is politically very useful.

Which is probably why, even now, after 20 years of concern expressed and grimacing at press conferences, that all that tends to happen is announcements, and not any change to the seemingly untouchable arcs that govern house prices, rental costs and wages. Despite concern expressed by the government, anything short of them actually executing KiwiBuild (remember that?) is unlikely to have any impact at all on our desperate and depraved housing market.