The finance minister went to Martinborough today to open a new regional banking hub. But as Alex Braae reports, many see it as too small a measure to address a serious issue for regional New Zealand.

There hasn’t been a bank branch in the south Wairarapa centre of Martinborough for a long time, and there still isn’t now.

What there is now is a regional banking hub, based in a community building that combines the library and the local iSite. It’s one of four around the country, in a pilot programme for areas that have lost physical branches. They’ll include a Smart ATM that can process deposits as well as withdrawals, and have someone on site to help out with using the system. Six banks will offer services through the hubs, including the four major Australian-owned banks.

The cooperation is actually quite a significant point. Grant Robertson, who was there for the grand opening of the Martinborough hub, said both the Commerce Commission and Reserve Bank had to be convinced of the merits of the idea. Each hub in the trial programme will be slightly different, to see which model – if any of them – should be rolled out across the country.

But it’s a small measure against a defining trend in banking over the last few decades – the withdrawal of physical services from locations that aren’t super-profitable. Even the new hubs won’t necessarily offer every service someone might need from a branch. For people in the regions, that means drives to get to a branch can be hours long. It hurts businesses, it hurts community organisations, and it hurts the elderly. 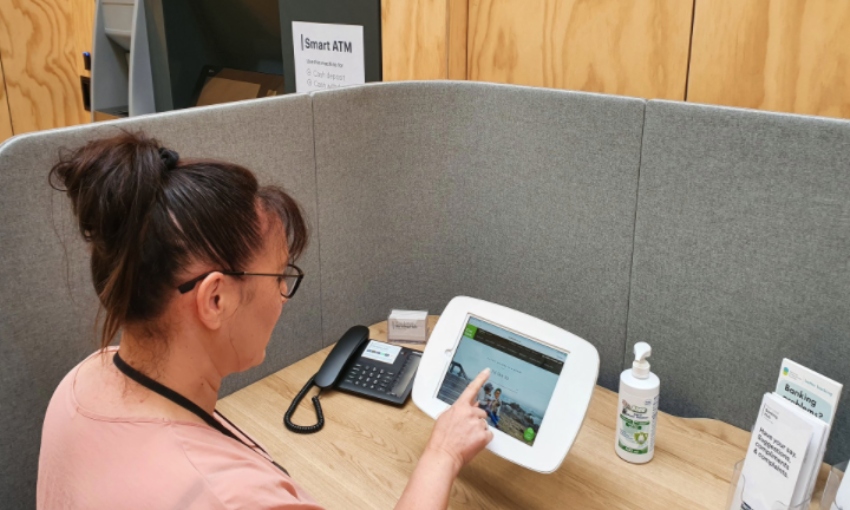 Just last week, the wave of closures continued with the news BNZ would be pulling out of 38 locations. Some were in big cities. Others will result in huge swathes of the country losing branches. For example, up the East Coast to the north, both Waipukerau and Dannevirke will lose their branches. The closures broke a previous promise from the bank about how long they’d hold off from making the move.

On a sunny Friday morning, Martinborough was bustling with economic activity. The cafes were full, and every carpark around the square taken up. Not only is it popular with tourists and retirees, it also serves as a hub for thousands living in the surrounding district.

But South Wairarapa District mayor Alex Beijen said banking services in Martinborough are currently non-existent. “So over the past 10 years all the major banks have removed their branches. The entire district has no branches.”

One former bank is still in use, but you can only put money in – it’s a tapas bar called The Wine Bank. As Kiwibank CEO Steve Jurkovich joked, “it’s now providing far superior liquidity than it did previously”. Beijen welcomed the arrival of the hub, but said it would be “totally impossible” for the same level of service as a branch to be provided. “It means someone from Ngawi doesn’t have to drive an hour to get to a bank branch, but I think you can’t underestimate the issues that the constant withdrawals from rural New Zealand of major trading banks has had on the community.”

A local at the petrol station said there had been a big community fight to try to save their last branch, including a “hands round the bank” day. But it was to no avail, and now they have to go to Masterton to do their banking. The new hub will provide some benefit, but there will still be issues to navigate, like being able to access change for cash transactions.

“There’s an economic problem with that, with businesses or staff having to take a day off to do their banking, and the cost and inconvenience associated with that,” said Beijen.

Beijen argued that the closures showed the banks had lost their sense of social responsibility, while still making massive profits off communities. “They’re merely reacting to the situation they themselves have created, and the need for greater profits. They do not have a social part to their balance sheets.”

He said central government needed to do more to force the issue. “I think it’s time to place some social requirements on banks operating in New Zealand that recognise that what they’re doing is destructive to quite a large percentage of the population.”

Deputy PM Grant Robertson said the government had been an early supporter of the regional hub model, because they could see the damage being done by branch closures. “It would have been very easy to bury our heads in the sand and do nothing.”

But surely, when banks are having a tough year and still raking in massive profits, more pressure should be put on banks to maintain branches? 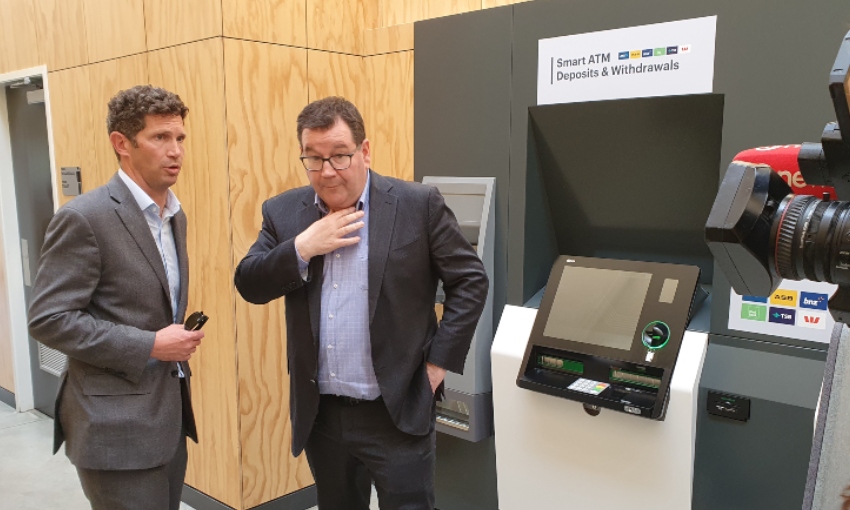 Grant Robertson standing in front of one of the smart ATMs (Photo: Alex Braae)

As many speakers at the hub opening noted, bank customers are now more likely than not to use digital services. But there’s still a significant minority who can’t, or won’t.

Beijen said the proportion of those over 65 in the South Wairarapa District is projected to hit 30%. Over and above the mobility issues some older people face, having no bank branch can also increase the potential for fraud and elder abuse.

Hanny Naus, an elder abuse specialist with Age Concern, said the organisation receives about 2,500 reports of elder abuse every year, and more than half of those cases include a financial element.

“Traditionally when bank branches were in smaller places, they knew older people, and some of them still do.”

She gave an example of what a red flag might look like, with cases typically involving someone known to the person being abused. “They could ring us up and say a person that we know is coming in every week, [withdrawing money] with someone saying they are their nephew, so we get warnings from actual face-to-face bank staff who get to know their customers.

“Particularly in small towns these banking hubs are positive, because there’s been a high level of trust from people knowing each other.”

Naus said from an elder abuse point of view, that is an advantage the hubs will now provide, over and above banks simply offering customers digital services. “It’s enabling another set of eyes.”

Banking Association chief executive Roger Beaumont said staff at the hubs will be trained to recognise potential financial elder abuse, and there will be systems in place to report concerns.

Speaking more generally, Naus said claims from banks that people were moving away from face-to-face banking should be taken with a grain of salt. “It’s a two-way thing. Banks are making it harder for people to do face to face. So this is a positive attempt for banks to offer a safer option, and we encourage that – as an option.”