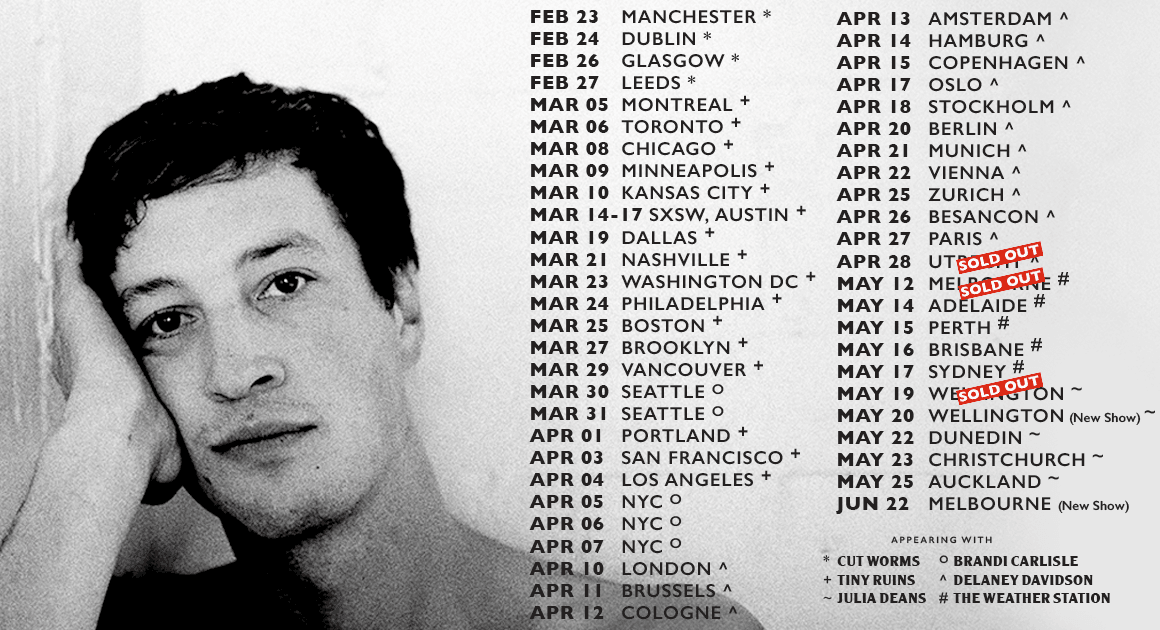 Aldous Harding and Nadia Reid are at the forefront of a folk scene that is revolutionising how NZ music is seen overseas. Recently both also made the shortlist for this year’s Taite Awards, but Gareth Shute argues they’re just the tip of the iceberg when it comes to local folk success stories.

At the end of 2017, Aldous Harding was named as one of NPR’s top ten albums of the year, while Nadia Reid was listed at No.2 in Mojo magazine’s list (Harding was at No.10). But they’re not the only artists from the New Zealand folk scene to gain a worldwide fanbase. Marlon Williams, Tiny Ruins, French For Rabbits, and Flip Grater have also toured widely overseas, signed to international labels, and had their most popular tracks surpass a million Spotify streams. Even lesser known folk musician Graeme James has achieved similar feats.These artists mark an abrupt change of pace for a country more known for the brash pop of Lorde, the upfront rhymes of Savage or the heavy guitars of Shihad and The Datsuns.

If we’re looking to explain the roots of this new wave of acts, the best place to start is the quiet port town of Lyttelton. Local band The Eastern were fundamental in bringing life to the South Island folk scene with their hectic playing schedule, managing 230 show in a single year, 2009, and holding a residency at the Wunderbar that drew in other local acts like Delaney Davidson and Marlon Williams when he was still in his high school band, The Unfaithful Ways.

The Eastern recorded with producer Ben Edwards whose Christchurch central studio, The Sitting Room, was destroyed twice by earthquakes, leading him to move his operations to Lyttelton. It was here that the debut albums of Nadia Reid, Aldous Harding and Marlon Williams were recorded. Edwards co-produced with Williams for his and Harding’s albums, which were both released through Lyttelton Records. The growing sense of community was shown by the Harbour Union album that was recorded by acts from the Lyttelton scene to fundraise for those affected by the earthquakes.

Most New Zealand acts don’t have much chance to get road-ready before heading overseas since a regular national tour only takes on the four main centres. However, The Eastern helped enliven a folk circuit that ran through the small towns of the country, as did fellow Cantabrian Flip Grater and Auckland-based artists like Luckless, Reb Fountain, Tim Guy, and Bond Street Bridge. Subsequent acts followed their example: Nadia Reid’s 2013 national tour took in 15 dates; Aldous Harding was in The Lonesome Pine Specials who did a 19-date tour in 2015; and Williams and Delaney Davidson promoted their album (Sad But True, 2014) with a 13 date tour of the country.

Being a folk musician gives the option of travelling in a more stripped back fashion than a full rock band; one or two musicians only require a car to get from town to town. This means a big saving when it comes to touring overseas (not to mention not having to hire and transport a full drumkit). Nadia Reid has done her biggest tours overseas with just Sam Taylor on electric guitar, French For Rabbits started out touring as a duo, while Tiny Ruins is currently touring North America accompanied only by bass player, Cass Basil (many of the shows are support slots for Marlon Williams). Aldous Harding takes a different approach, saving on airfares by employing backing musicians in each region that she tours.

Other local success stories come from acts who started out as buskers before moving into music industry proper. Graeme James started out playing to tourists on the streets of Queenstown, then went on to record two albums of covers (his folky version of ‘Young Blood’ has now passed 4 million streams on Spotify). His subsequent album of originals produced a pair of similarly well-streamed tracks – ‘Alive’ has 3.2 million streams and ‘One + One’ has 2.4 million. It’s also worth mentioning Mitch James – his music is more pop than folk, but he started out busking with just an acoustic guitar on the streets of Europe and now he has one track, ‘No Fixed Abode’, at 13.8 million Spotify streams.

A more fundamental question is why these acts found such a large audience overseas. Part of it seems to be that folk retains an image of musical authenticity that rock has long since forgone. There used to be nothing more ‘pure’ than four musicians bashing it out on guitars and drums, but with all the cross-genre experimentation and digital manipulation of the last two decades, it’s hard to make the case that rock is really any more raw or unfiltered than pop music. This makes a musician wielding only their voice and an acoustic guitar (or keyboard) seem like they’re carrying the true flame for the classic music of the ’50s and ’60s. This may also explain why, in 2010, sales of acoustic guitars surpassed those of electric guitars.

Harking back to a traditional style means you immediately tap into a worldwide niche audience. You can appear at folk festivals where being exotic rather than famous is less of a hurdle (as well as slotting into folk playlists on Spotify). Starting out with the bare bones sound of just a voice and guitar/piano also means that you can gradually expand your sound over time. French For Rabbits have moved more toward dream-pop (expanding their line-up to a five-piece), Nadia Reid edges toward rock on some recent tracks, and Marlon Williams has always had one foot in alt-country.

Having a traditional core to your music also means it appeals to an older generation of musicians who may give you a leg up. Neil Finn was such a fan of Tiny Ruins that he created her first music video, while Jools Holland gave slots on his TV show to Nadia Reid, Aldous Harding and Marlon Williams. This might also explain why the classic UK rock mags have heralded these same artists. Uncut magazine gave a score of 8/10 to both of Aldous Harding’s albums and both of Nadia Reid’s albums too; Mojo gave a 4/5 to Marlon Williams’ debut, Nadia Reid’s debut, and Tiny Ruins’ second album, then named Nadia Reid’s recent album as the second best of 2017. It helps that the older readership of these magazines might actually buy an album, rather than just streaming it.

Despite this, it’s true that revenue from album sales or streams is never going to compare to the money artists would’ve made even a decade ago. In some ways, the record industry is reverting back to a situation similar to the pre-1950s, when most musicians make their money from live shows rather than album sales (folk music was popular back then too!). While it’s true that technology means that pop artists can work at home to create a viral hit that will provide them an income, only appearing live once they’ve already developed a fanbase online (if at all), this will only ever provide a sustainable career for a small fragment of our music acts. The others will most likely need to survive like troubadours by cutting down on costs and doing long tours until they find an audience large enough to support them.

The flood of overseas success stories from our folk scene may not be at an end either, with hard-touring veterans like Great North – two-time winners of the Tui for Best Folk Album – and Luckless relocating to the UK and Berlin respectively. Equally encouraging is what has happened back home: huge headlining shows for folk acts, like Tiny Ruins at Crystal Palace, Marlon Williams at the Auckland Town Hall, or Aldous Harding at the Civic. Right now New Zealand is making some of the best folk music in the world – and music lovers at home know just how lucky we are.