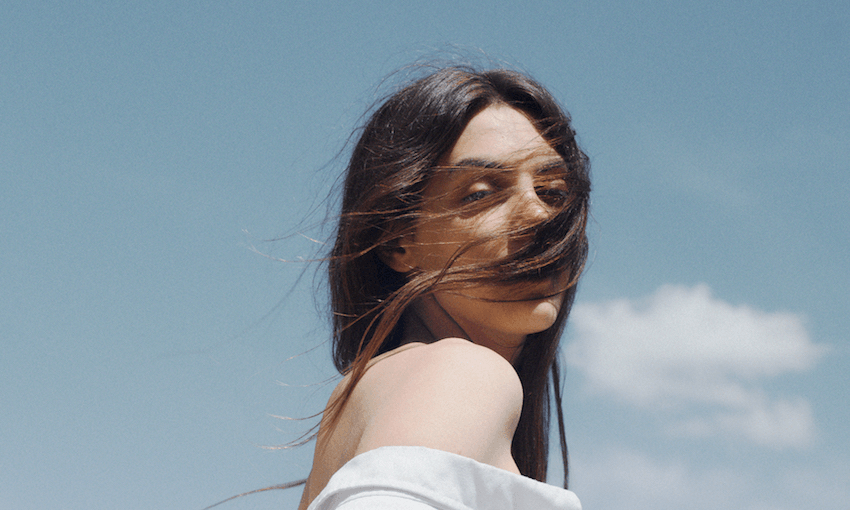 Folk singer Julie Byrne: ‘Music is a space where I don’t have to conceal my pain’

Martyn Pepperell talks to American folk-singer and park ranger Julie Byrne before her two shows with Nadia Reid in Christchurch this weekend.

In August last year, I was lucky enough to watch folk singer, songwriter and guitarist Julie Byrne perform a blissed-out daytime set at Finland’s Flow Festival in Helsinki. While traces of folk titans like Joni Mitchell and Vashti Bunyan haunted the proceedings, her spare, minimalist songcraft rippled with an ambient/new age twist, pulling on heartstrings in a fashion all her own.

Although she’s been honing her music since her teens and began releasing small cassette EPs over the last five or so years, the Buffalo, New York-born musician has recently gone from roving across the US to touring regularly through Europe, playing to appreciative audiences in support of her breakout second album Not Even Happiness. She’s a skilled songwriter, vocalist and guitarist who also studied environmental science, shies away from social media, and takes a bigger-picture view of life and how she engages with it.

On Monday, Julie made her first New Zealand appearance at Laneway Festival in Auckland. This weekend, she’s headed to Christchurch to play two shows with her good friend, New Zealand folk artist Nadia Reid. While she was exploring our countryside, Julie made some time to talk to me about why she does what she does.

The Spinoff: I read an interview you did with Stereogum where you talked about working as a seasonal ranger at Central Park in New York. You said, “I liked working in that form of service to the public.” In a lot of ways, performing music is a form of service as well isn’t it?

Julie Byrne: I think it is really important that we work to create spaces where we can commune in honesty with each other. This is especially important in the age of social media, which is something that is so pervasive, and yet only really reflects such a narrow facet of human emotion. I think music is a space where, at least for me, I don’t have to conceal my pain or my trials. I feel playing shows and having the opportunity to meet people through music has been a very significant and quick point of love and connection. Music is very interesting in that way because once it’s released, it sort of takes on a life of its own.

Having the opportunity to meet people through touring has been a really beautiful experience. It feels like there is so little need for small talk because some kind of intimacy which has already been formed between us through the message of the music itself. I think that any kind of labour of love works towards this end, and hopefully, we can help each other feel less isolated in our experiences in this life.

Something I love is the ambient instrumental three-quarters of the way through your set and the way you turn it into a meditative moment. What’s going on there?

That part of the set is functional on a couple of levels. I’m going to unveil a few of my tricks here [laughs]. We use that interlude as a space for me to change guitar tunings because I play in several different tunings during the set. I use the time that is left to try and make contact with what is happening presently.

At this point, I’ve been performing for a long time, and it took me many years to even become less distracted by the anxiety of performing in front of people. I feel like that ambience in the set – that spaciousness – it gives me the opportunity to return to what is unfolding at that moment fully. I’ve begun using it in that way more and more. I look forward to it because it is an opportunity for me to return to that moment in time. I love that composition, and it’s something that [my collaborator] Eric Littmann deserves full credit for. It’s his work and creation. I feel very grateful for it.

I noticed on Instagram that you follow a lot of contemporary vocal electronica, art pop, and RnB artists like Kelela, Moses Sumney, Solange, and Lafawndah. What sort of relationship do you have with what they do?

It would be difficult to put into words. I think that artists like Lafawndah, who I did an artist residency with, but I was a fan of her beforehand. She is such a visionary composer and producer and involved in every element of what she does. To bear witness, and have some kind of glimpse into her process was an experience I was really thankful to have. Moses and Kelela, I feel like it would be difficult to do justice to what I feel for their music on the spot. They just have so much eloquence and command. They too are visionary artists.

Musicians have often told me that, from their perspective, listening to music they might not make themselves can be very exciting.

I think that is probably another component of it, just feeling a sense of awe and wonder at their creative process because it’s so different from my own. Mine feels very simple in comparison: it’s pretty much just me sitting alone. My process is very solitary. It’s always been the same. It hasn’t gone through too many variations. It’s always just me exploring the guitar. I feel like a one trick pony in that way [laughs], so I think it’s nice to see the fearlessness that other artists have about diving in so fully and exploring the possible avenues for their own creative work and collaboration.

Aside from your Instagram, which I guess you use pretty sparingly, you seem to have managed to build a career without being very active on social media. How do you think you got here?

I think a lot of it is luck, grassroots word of mouth, and Spotify [laughs]. Social media makes me feel sad most of the time. If you get into a heartbreaking fight with the person you love, you’re not going to put a picture of that on the internet. If you’re out at a party with the person you love and having a good time you’d probably be more inclined to post a picture of that. That’s just one example of the way in which I as a user of social media could access that virtual world, see a representation of someone’s fear of emotional expression, and feel even more broken by comparison. Everyone has trials in their life, but for something that has become so much of a part of everyday life, social media feels so destructive, because it only represents such a small field of what it means to be alive; it feels so unhealthy. I’m very sensitive, to my own detriment, so using social media is something that has always made me feel worse. The ways in which it has made me feel better have felt very short-lived, thin, and temporary.

Obviously, it can be such a valuable tool to remain connected to people we care about, especially people who live far away. And for a musician, artist, or a small business, it’s such a valuable tool to promote whatever it is we promote. I don’t take that for granted, but the psychic implications feel vastly complex, so much more than I realised when I started using when I was 18. It’s been a process of realising how it actually makes me feel.

This weekend, you’re playing two shows in Christchurch with Nadia Reid. It seems like you two are getting on pretty well. How did this friendship come together?

We do get on pretty well. The first time I listened to Nadia’s music was in 2014. A mutual friend of ours played Nadia to me while we were driving home from a show. It was the first time I’d ever been to the UK or travelled outside of America. It was my first experience of feeling very far away from home and there is a lot of wonder in that, but there is a homesickness as well. We were driving through the Moorlands in Yorkshire when he put on Nadia’s first record, I just felt very safe and protected by her music and the sound of her voice. Three years later, I was able to meet her and see her perform at the Green Man Festival in the UK in August. I introduced myself afterwards, and we hit off. We’ve played some shows together since. She came to the US, and we played together, and now we’re playing together in New Zealand.

Julie Byrne and Nadia Reid play two shows together at Lyttleton Records in Christchurch on the 2nd and 3rd of February 2018. Buy tickets here.

Spinoff’s music content is brought to you by our friends at Spark. Listen to all the music you love on Spotify Premium, it’s free on all Spark’s Pay Monthly Mobile plans. Sign up and start listening today.