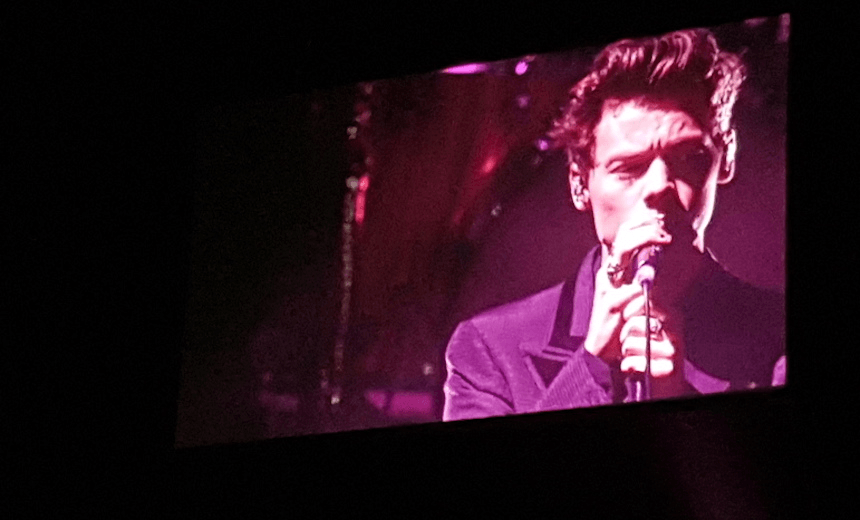 I’ll start at the beginning because concerts like this don’t just start when the band take the stage. For at least a thousand Harry Styles fans, the show started long before I was even conscious on Saturday morning. Fans were camping overnight, showing up at eight o’clock in the morning to wait in line for ten hours in the blistering heat for the chance to be close to Styles, to show their absolute devotion. To many people, this kind of adulation seems obscene, but as the girl next to me in the crowd kept saying to herself over and over, for many people a Harry Styles concert is the best night of their lives. The pressure of that in a city is tangible. I spent much of Saturday in a state of nervous agitation. As someone with a vested interest in Styles’ career and a genuine love for his music, how would I respond to seeing him in the flesh and being among the people that I spent so many hours researching and writing about?

Every anxiety I had, however, melted away when I arrived at the arena. I have been to a lot of shows but I have never seen such joyous, welcoming anticipation. Stepping into a crowd of Harry Styles fans is disarming. Everyone is there because they love Styles and they love the music. The point of the exercise is to have as nice a time as humanly possible. Waiting in line and waiting inside the arena for the show to start, no one shoves you, no one gropes you. Everyone knows how much it means to everyone else to be there. The experience of being a part of the crowd is so overwhelmingly positive that it almost wouldn’t matter if Styles put on a good show or not.

Fortunately, the show itself was technically flawless. Styles is an earnest and charismatic performer, and he unabashedly shares with his audience the love he feels for his craft. He plays his songs with zeal and an infectious sense of delight. It is clear from his double-breasted suit and Eagles-esque lighting rig that he loves dad rock possibly more than any 23-year-old should love dad rock, but he clearly sees no reason why his millions of young and overwhelmingly female fans shouldn’t have the opportunity to love it too.

His band are exceptionally talented and experienced musicians but there is no air of condescension when they take the stage, no sense that Styles’ love of 1970s guitar jams is any more serious than any of One Direction’s back catalogue. In fact, they performed two One Direction songs– ‘Stockholm Syndrome’ and ‘What Makes You Beautiful’. I never imagined that I would hear a prog rock version of ‘What Makes You Beautiful’ and enjoy it, but enjoy it I did. Such is the infectiousness of Styles’ passion and sincerity. He didn’t make it prog because he thought the original wasn’t cool enough, he made it prog because he loves prog and he loves One Direction. For Styles, the two things don’t have to be separate, and judging by the song’s rapturous reception, the fans agree.

But it all comes back to the audience and the way Styles treats them. It is impossible to describe the intensity of the love and ecstasy that ran through the crowd when he stepped on stage; it was seismic. At first, Styles appeared behind a pink, floral curtain, his silhouette outlined by a spotlight. When that curtain dropped away the screams were unlike anything I had ever heard or felt. Almost instantly someone tossed a rainbow pride flag up onstage and Styles fixed it to his mic stand, announcing (as he has done at many of the shows on this tour) that, in this room, everyone should feel free to be whoever they want to be. It was a delicate but powerful statement, as is much of what Styles has been doing on this tour.

Harry Styles, as I have written before, makes Rock Music. He has media outlets falling over themselves to label him a sex god, Mick Jagger’s second coming. And yet Styles’ merch is millennial pink and most items bear the slogan “treat people with kindness”. Half of his band are women, his support acts are women, pride flags and Black Lives Matter signs are a prominent feature at his shows and on his social media. There are no soapboxes, just tacit assertions that rock music doesn’t have to lean into toxic masculinity. That, in fact, women and girls have a place in rock, queer folk have a place in rock, and that joy, kindness and acceptance are integral to any musical experience.

“I love you,” Styles said at the end of the show, voice wavering slightly, “I love every single one of you, I want you to know that.” At that moment we were at the apex of joy, Styles reaffirming the love that flows between him and his crowd, reminding us that there’s no him without us. Afterwards, I sat on the grass with my friends and watched streams of young people pouring past, beaming and holding hands, wearing shirts that insist you treat people with kindness. I felt the way I felt as soon as I stepped into the crowd to line up for the show, that we were all a part of something truly lovely, and truly special.