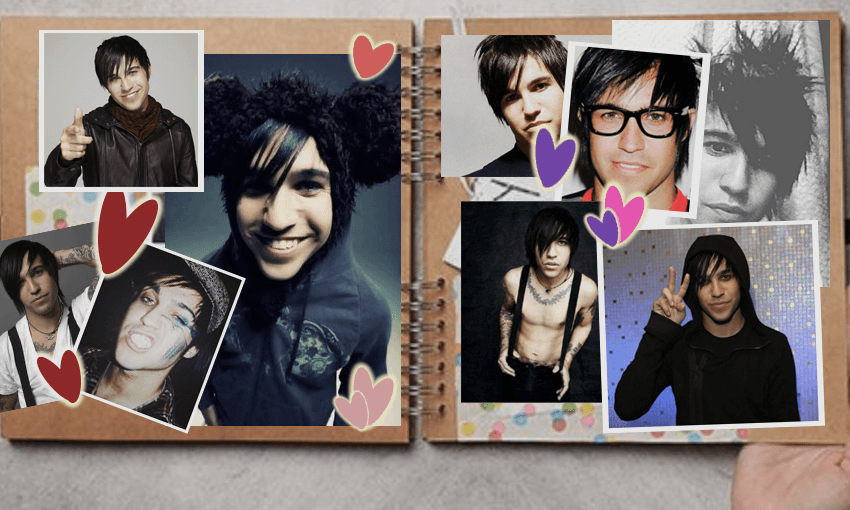 Ahead of Fall Out Boy returning to New Zealand on their MANIA tour next week, Alex Casey fulfils her teenage dream by getting one-on-one time with Pete Wentz.

For someone who spent the better part of 2007-2008 daydreaming about the first words that Pete Wentz would ever say to them, things weren’t off to a rip-roaring start. It wasn’t supposed to be like this – me: on the phone in a leaky boardroom in Auckland saying “hellooo, HELLLOOO” like Mrs Doubtfire; him: expecting his third child and struggling to hear my rasping niceties on the other side of the world.

At the age of 16, Fall Out Boy’s album Infinity on High was the soundtrack to my life, my death and my afterlife (of the party). My Bebo profile was littered with lyrics from ‘Bang the Doldrums‘ and ‘G.I.N.A.S.F.S‘. Drunken outings featured a lot swaying in Ellen Melville Square while singing ‘Golden‘ acapella, solemnly believing that the lights of Auckland’s CBD were “too heavy for me” and my half-finished Vodka Cruiser.

There’s no logic as to why a punk-pop album that’s mostly an inside joke about the ‘scene’, getting famous and keeping fans happy resonated so strongly with a teen in Sandringham, New Zealand who had approximately zero scene, zero fame and zero fans, but that didn’t stop my obsession. That was 10 years, a few bust-ups and three albums ago, and now Fall Out Boy is returning to New Zealand on their MANIA tour and Pete Wentz is late for his phone call with me.

So how is a human supposed to act when they get precious minutes with someone they once genuinely, wholeheartedly, unreservedly believed was their lord and saviour? Do I tell him absolutely everything about how much his music once went to me or should I play it cool and professional? “Lean into it,” said Henry Oliver, The Spinoff’s music editor, “you can always just hang up.”

The following is an outcome of that terrible, terrible advice.

I know this isn’t professional but I wanted to start with a confession: I am a super fan of yours and of Fall Out Boy, specifically the album Infinity on High.

Oh, awesome. Thank you for saying that. Randomly that album was really big in New Zealand. I remember when we went there it was on the charts for as long as Thriller by Michael Jackson. It was really big, made a really big impact. Maybe that has something to do with it, I don’t know.

Can I tell you what happened to me when you guys came to New Zealand 10 years ago?

Tell me a story, sure.

Okay so, the weekend before the show, my friend and I spent the whole weekend crafting a Fall Out Boy-themed scrapbook.

It was filled with tasteful photos of us in various Fall Out Boy-inspired photoshoots.

My friend got a t-shirt printed that said “Pete Is My Homeboy,” you remember those?

Not me, though, I was playing it cool.

We skipped school and got to the venue at 9 am, for the doors opening at 7 pm.

I was so worried I was going to be tired by the time the show started that I ate an entire box of caffeine pills.

So by the time you guys came out, I had started vomiting profusely. Absolutely everywhere, into the crowd, onto the floor and onto myself.

I missed a good chunk of the show and I thought I had ruined my life forever.

But then a few days later I saw a picture on MySpace of you holding our scrapbook. It, honest to God, made my little teenage life. I wept a lot.

That’s awesome, I’m glad. We always look at those scrapbooks when we get them on the road.

Is there any chance… you still have it?

I mean, it’s definitely somewhere. It’ll either be in one of our houses or in our practice space. It’s very humbling to hear that because New Zealand is so far away, so to reach people there is pretty crazy. I don’t want kids to take a bunch of caffeine pills and barf though, that makes me feel bad.

Well, yeah, it’s entirely your fault which is sort of why I’m ringing you: retribution.

Well, there you go. You finally got it.

Who made you want to chow down on caffeine pills when you were a teen?

I never really had that. I liked a lot of sports guys and I was into movies, but I never got a chance to go to concerts as a teenager. By the time I got to shows, they would just be these tiny, terrible punk rock bands. The internet didn’t exist, it was just a totally different scene. Like I loved Michael Jackson, but I was never going to get to go to a Michael Jackson show. I never got to have that kind of fan interaction.

[An American woman interrupts and apologetically says there is only time for one more question. I gurgle.]

So I know how I feel about that 2007 era, but how does it feel for you to look back at Infinity on High from where you are now?

You know, it was an interesting album. I had just moved to California and there was so much change happening in my life. It blows my mind that anyone can relate to that album at all, it was coming from such an odd perspective and odd time.

Why was it such an odd time?

Fall Out Boy bring their MANIA tour to The Trusts Arena on 7 March. To be in to win a double pass, email us a Fall Out Boy memory.