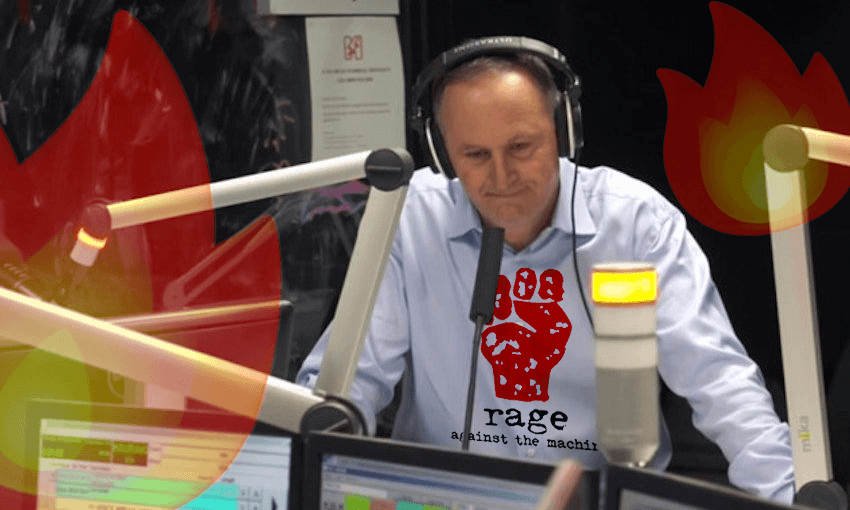 Shilling in the name of: John Key and how the right co-opts leftwing music

Nine years ago, John Key introduced the number one song of The Rock 1000 countdown: Rage Against The Machine’s ‘Killing in the Name Of’. Johnny Crawford writes about this bizarre moment in NZ musical history.

While some of those that work forces are the same that burn crosses, some of them just want to rock out to their favourite band Rage Against the Machine without you, a classic leftie, making it weird and political.

Instances of the right co-opting progressive media for their own ends are depressingly common. In America, Republican politicians occasionally test the waters by playing songs at their rallies by artists other than Kid Rock. A predictable statement will be issued in response. This is usually something along the lines of:“Nebraska congressman Doug Brisket has gone on the record as saying that all bathrooms should be designated as ‘men only’ spaces because women don’t poop. This idea is incompatible with the views of Bruce Springsteen or Mumford and Sons or whoever. Please stop playing our music at your Reclaim our Restroom rallies.”

These pleas will invariably go ignored as evidenced by the fact it keeps happening, and the cycle continues.

But this isn’t a uniquely American phenomenon. Aotearoa had its own version of this narrative and it is exactly as cringey as you are imagining.

The year was 2010. John Key was in his first term as prime minister. I was in a liminal stage of my life. Halfway through a BA, I was on my way to becoming a cardigan-owning, musically omnivorous lanyard-wearer, but I was still holding onto vestiges of my provincial upbringing. It was the uni break and I was back in Timaru. I had spent the holidays driving trucks for a landscaping company but I had taken the day off. On this day I had other plans – plans that involved rocking out.

Because this was the final day of The Rock 1000.

The Rock 1000 (now The Rock 1500) was a big deal when I was growing up. Once a year, over the course of a fortnight, 91.5 FM Timaru would count down the 1000 best songs as voted on by The Rock’s listeners. This would start with some downright obscure (for The Rock) stuff but by the time the final Friday came around, they’d get to the bogan staples that were their bread and butter: AC/DC, Guns N’ Roses, Pink Floyd, et al.

The final Friday of The Rock 1000 was a great day to call in sick, sit in your garage and sink a swappa crate of Speights while 100 of the best rock ’n’ roll bangers of all time played.

In 2010, the number one track as voted by you was Rage Against the Machine’s furious protest song ‘Killing in the Name’ (it would go on to win again in 2017). The track’s righteous left-wing opposition to police brutality and racism is apparent in every screamed lyric.

Zack de la Rocha’s mantra in the song’s verse that “Some of those that work forces, are the same that burn crosses,” is as relevant and urgent today as it was in 1992. Never mind that it has been used to torture prisoners in Guantanamo Bay. Never mind that Nigel Farage played it at UKIP rallies. Never mind that Republican ghoul Paul Ryan has professed his love for Rage Against the Machine.

Never mind that John Key used the song to connect with his provincial base.

It was 6pm and I’d long since given up on the hope of finishing an entire crate by myself. After the rest of the top five had been rounded out with songs by Metallica, Foo Fighters and Tool, The Rock broadcast a special message from John Key himself: “As prime minister of New Zealand I give permission to The Rock to play ‘Killing in the Name’ in full. Uncensored.”

This was a big deal! The song has 17 f-bombs and it has met with considerable controversy when it has been played uncensored overseas. I was feeling merry and my politics were not fully developed so I thought of this as a quaint moment of cultural cringe (like a metal version of the infamous three-way handshake) rather than something more sinister.

But the same forces that were at play when the song was tainted by Farage and Ryan were present when John Key pre-emptively pardoned The Rock. What was once dangerous and spoke truth to power had been sanded down and defanged by the very machine that Tom Morello was raging against. Yes, our former prime minister has a cringey uncle energy, but his three terms in power saw a continuation of the mass transfer of wealth and power from the poor to the rich. What does this song stand for if not everything that John Key doesn’t?

The left may be winning the fight for pop culture, but the political power of the right has been growing steadily since the neo-liberal reforms of the 80s. I am grateful to live in a world where leftist artists like Serj Tankian, Cardi B and antifa supersoldiers The Vengaboys can speak freely, but people should not confuse their cultural cachet for actual power. As Kurt Vonnegut said about the Vietnam War, “every respectable artist in this country was against the war. It was like a laser beam. We were all aimed in the same direction. The power of this weapon turns out to be that of a custard pie dropped from a stepladder six feet high.”

The idea that consuming the right kind of art is politics in and of itself has gained a lot of traction lately but it is as pointless as any other half-hearted consumer activism. Watching Sorry to Bother You isn’t going to empower the working class any more than ordering a coke without a straw will cool our boiling oceans. These actions aren’t without symbolic value but they should be accompanied by organising, protesting and volunteering (and voting I guess). Y’know, like actual politics?

There is nowhere that the limitations of political art are more apparent than when that art is adopted by the right. Through a mixture of bad faith arguments and a lack of humanities education, any piece of art, no matter how potent, could be co-opted by people its creators would hate. You could write the wokest song in the world and Donald Trump himself could still turn around and say “actually this is about how we need to bomb Iran”.

Many people, myself included, are guilty of placing undue importance on pop culture. But do you know what is actually important? Meaningful tax reform. Removing abortion from the Crimes Act. Increasing our refugee quota. Give me that and Kid Rock’s ‘All Summer Long’ can win The Rock’s countdown this year for all I care.