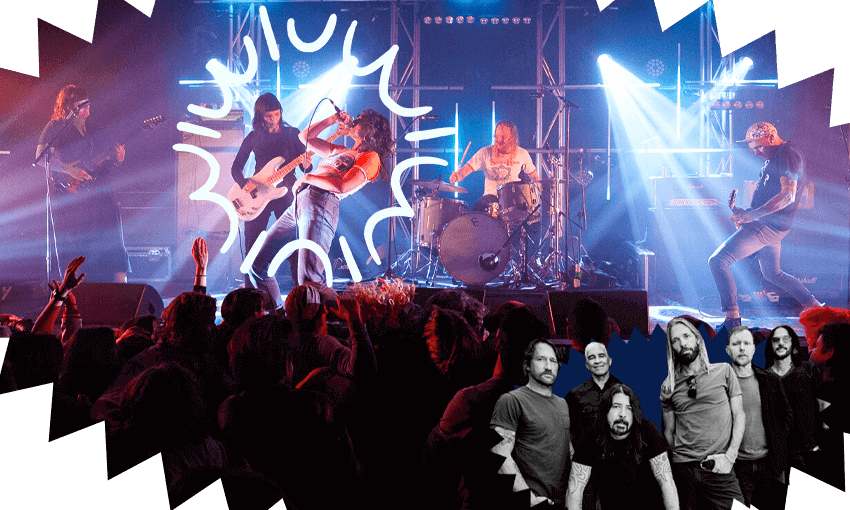 ‘Freaking out … I’m going to spew’: What it’s like to be picked to play with Foo Fighters

An Auckland punk band thought being chosen to open for Foo Fighters might be some kind of sick joke. It wasn’t.

Two and a half years ago, Lucy Suttor had never been in a band. She’d never wanted to be in a band. The only singing the part-time actor and full-time masseuse had done was for fun at punk rock karaoke nights.

When her friends at Auckland venue Whammy Bar, where she works on weekends, asked her to join their band as the singer, her response was: “Absolutely not … I can’t be in a band. That’s crazy.”

They twisted her arm, and it’s just as well they did. This week, Suttor and her five-piece punk act Dick Move were confirmed as the opening act for Foo Fighters’ return to New Zealand, two highly anticipated shows at Wellington’s Sky Stadium on December 15, and Auckland’s Western Springs on December 17.

Dick Move’s biggest show in their two and a half year career is in front of 600 people. Their set, comprised of “short, sharp hot takes about what’s going on around us,” tops out at 20 songs and 30 minutes. So far, their most popular YouTube video has 3500 views.

In true punk spirit, they’re an underground act. When The Spinoff initially inquired about an interview, one band member was too nervous to reply to the email. Yet here they are, about to step onto the biggest stages the country has, opening for one of the world’s most popular rock acts.

How are they feeling about that? “I am incredibly fazed by it,” says Suttor, who spoke during a break at work while relaxing on her massage table. “I’ve been flipping between feeling very excited, overwhelmed, freaking out and kind of like I’m going to spew.

“Those are all great emotions to take onto a stage in front of 50,000 people.”

When the news initially came through, Suttor thought it was a joke. “I was like, ‘Haha cute … the Foo Fighters want to play with us? … that’s fun.’ Then it was like, ‘No, it’s actually happening.’ What?” She was immediately thrust into a live interview on One News.

Behind the scenes, local music promoters had sent Foo Fighters a list of potential opening acts for their New Zealand shows. The Foos listened and chose Dick Move, even requesting vinyl copies of their 2020 album Chop. “They wanted a yellow one and a clear one,” says Suttor, who sent the package off earlier this week. “I guess they’re just going to Dave Grohl’s house in America? Who knows.”

Before December, Suttor says she and the rest of the group — including Whammy Bar owner Lulu Macrae, Luke Boyes, Justin Rendell and Harriet Ellis — will need to write new music in case the Foos ask them to play for more than 30 minutes. Their songs are inspired by “the things that we talk about at the bar at four o’clock in the morning … social injustice, politics, experiences as a woman, landlords, cops, men, holding figures of authority to account.”

They play fast, energetic, passionate shows, and she hopes, walking out on stage, that her nerves will pass. “I don’t think there’s anything we can do to prepare for that other than knowing it’s going to happen and we have to do it,” Suttor says. “I think we’ll be overwhelmed with hype and adrenaline. It’ll be a shock walking out there and seeing all those people.

“Hopefully I’ll look down into the front few rows, there’ll be people I know or some women that I can sing to as well. As soon as [I] get the first word out, it’ll feel like any other show, hopefully.”

Foo Fighters play with Amyl & The Sniffers and Dick Move at Wellington’s Sky Stadium on December 15 and Auckland’s Western Springs on December 17.