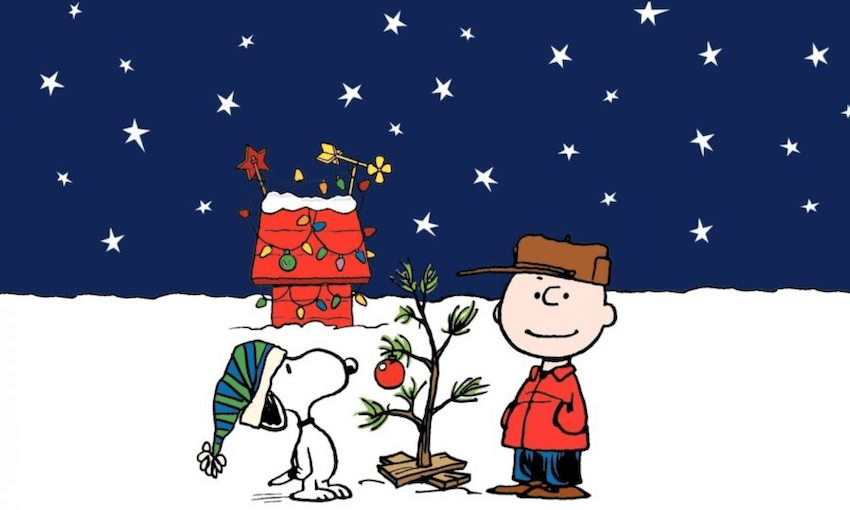 Henry Oliver talks to Bruce Ward, the man who made ‘Snoopy’s Christmas’ a perennial hit single in New Zealand charts.

It’s Christmastime! And Christmastime means Christmas music. And not just those fancy school choirs and buskers with violins, but a whole genre of pop music that you’re reminded of every year in early-December. Y’know – ‘Fairytale of New York’, ‘Merry Xmas (War Is Over)’, ‘Last Christmas’, ‘Do They Know It’s Christmas?’ All instantly recognisable. All signifiers of this most special time of year anywhere in the world where this is a most special time of year.

But there’s one song that means Christmas here in New Zealand more than it does anywhere else in the world. And it’s not remotely a New Zealand song. It’s recorded by an American group for an American label and is about a quintessentially American character. Yes, it’s ‘Snoopy’s Christmas’ by 60s novelty pop band The Royal Guardsmen.

How did this happen? How did ‘Snoopy’s Christmas’ become a hit in New Zealand but almost nowhere else?

To find out, I tracked down EMI’s singles manager in 1967, Bruce Ward, to find out how a novelty song from the other side of the world became what might be New Zealand’s biggest Christmas song, when it failed to make an impact in either its home country (it never appeared on the Billboard Hot 100) or the Christmas-song-loving United Kingdom.

The Spinoff: How did you become responsible for releasing ‘Snoopy’s Christmas’ in New Zealand?

Bruce Ward: I started at EMI in 1967, looking after all the singles. And that was the Christmas it was released. It just came in as a sample from America and I was looking at all the overseas charts seeing if it had charted anywhere. And it didn’t chart anywhere! I was sure it would be a hit here and released it and it ended up the biggest selling single EMI ever had! How bizarre is that?

Radio just went crazy over it and it just sold so many copies. It sold 100,000 that Christmas and it was only released in November. Shops in Wellington were coming into the warehouse and buying a hundred and then coming back the next day because they’d sold out. It was certainly a different era back then. It was great. It was my first year at EMI and they thought I was wonderful after that! It sent me off on a 40-year career.

What about ‘Snoopy’s Christmas’ appealed to you?

Why do you think it didn’t have the same success elsewhere?

I don’t know! Even Australia, you’d think it would have sold over there. But I’ve gone through all the chart books and it never really charted anywhere. I mean it made the top 50 or so, but it was never a bloody number one record. It’s insane, isn’t it? There’s a lot tracks like that. New Zealand’s got a strange taste in music.

How big was it, compared to other big singles at the time?

Well, it was on every press in EMI’s factory, there were five single presses I think, and it was on every one. It’s the only time I could ring up and say to the factory, “Just keep pressing it until I say stop”. I’d normally just ask for a thousand of this and a thousand of that. It was just selling so fast it was no good ordering a thousand or five thousand. There was a factory who pressed records for Philips and I got them to press some as well. And each night, it was sold out!

And it just kept on selling. And the stupid thing is, I put together The Best Christmas Album in the World Ever and because ‘Snoopy’s Christmas’ was on it, the album went absolutely crazy. And they’re still re-doing it now every Christmas. Every year when they do a Christmas album, ‘Snoopy’s Christmas’ is on it. And it’s 50 years ago! How can a single that’s 50 years old still be so popular? It’s crazy!

Do you still listen to it?

No, I turn it off. I’ve heard it enough times. But I remember the catalogue number was NZL985. That’ll be in my brain until I die because I ordered it so many times.

Did you try and repeat that success every Christmas?

Yeah, that was the problem. It went for a few years, and then all the shops were asking me ‘What’s your Christmas single for this year?’ and nothing exciting came in. The only thing was a Jackson 5 Christmas album, so I took ‘I Saw Mommy Kissing Santa Clause’ and released it as a single and would you believe that ended up the biggest selling Motown single in New Zealand at that time? When the Jackson 5 toured here, I gave Michael Jackson a gold record and said it was the first Motown single to go gold here. Nobody else released that as a single anywhere else in the world.

What makes a good Christmas single as opposed to a single any other time of year?

I don’t know. It’s just catchy. ‘Snoopy’s Christmas’ is such a catchy song. And it’s all ages. The kids love it, the oldies love it.

Did you ever get any recognition from the band or the label in America?

No. It was sung by the Royal Guardsmen and I once got an email saying that they’d love to tour New Zealand if anyone was interested. I don’t know what happened but they’ve never toured.

But they must have been aware that they had a hit here?

Yeah, they would have loved to come out here at the time, but they didn’t make it, unfortunately. But that’s showbiz!

This content was created in paid partnership with Universal Music. Learn more about our partnerships here.