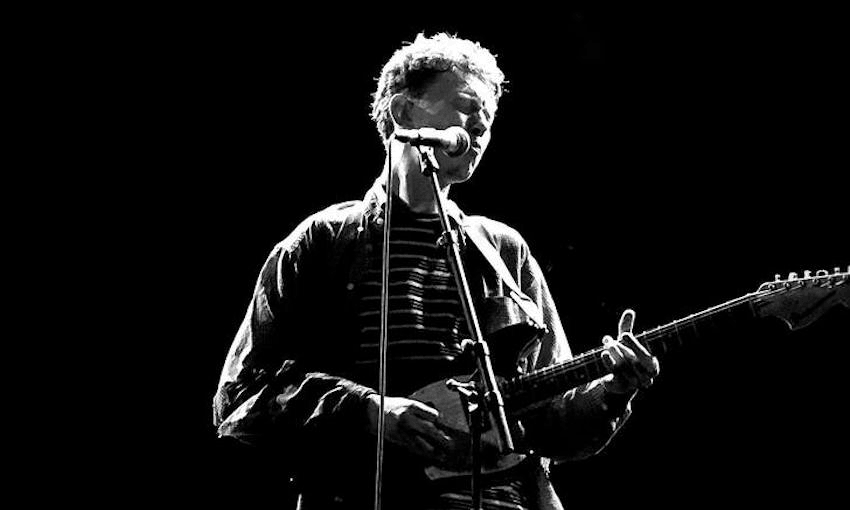 King Krule: Live in a cyclone

Last night, during Cyclone Hola, King Krule played Silo Park as part of the Auckland Arts Festival. Henry Oliver was there in all the wet weather gear he could find.

Last night, under the intermittent threat of Cyclone Hola, King Krule (singer/songwriter/guitarist/producer/poet Archie Marshall and his band) played at Silo Park as part of the Auckland Arts Festival in front of a sold-out crowd of (mostly) early-twentysomethings in raincoats and disposable ponchos. On the first cool night after a long, humid summer, standing on a muddy patch of grass for as the rain came down on a 45-degree angle seemed the perfect context to see Marshall, a Londoner, play the dense, drizzly music on his new album The Ooz, named, he’s said, for “the snot, the earwax, your spit, your jizz, your piss, your shit. Your beard, your nails—all of that shit.”

Marshall, a skinny, tightly-wound spring of angst, anxiety, and romance, is something of a generational hero to a distinct set of people young enough to still have heroes. They – wearing rolled up pants and rolled up beanies, smoking poorly rolled cigarettes – see themselves in him; the rogue, rough-edged oracle of a new generation of young white angst. They sang his often-incoherent lyrics back to him in unison (“Fuck that’s Coco-Cola/As TV sports the Olympic ebola”), they chanted his name (Ar-chie! Ar-chie! Ar-chie! Ar-chie!), they swayed to his slow jams, and jumped up and down enthusiastically to anything approaching a steady beat.

He’s a cult of personality. He’s a better and smarter Pete Doherty with fewer catchy songs and fewer opiates. He’s a younger and jumpier Tom Waits with less affectation and less theatre. He’s Johnny Rotten on hash instead of amphetamines, Joe Strummer without the socio-political earnestness. He’s the Elvis Presley of the Upside Down in Stranger Things. He’s Chet Baker with sandpaper for vocal chords, Screamin’ Jay Hawkins with a bowl-cut. He’s Mike Skinner with a guitar and a distortion pedal.

With his five-piece band (drums, bass, saxophone, turntables and another guitar), he combined thrashy punk, post-punk dub, hip-hop, jazz, ambient, trip-hop, ’50s pop and lounge into a melding mess of longing and anger. Always anger. Marshall’s rough, heavily accented voice was backed by a band that can turn from an elastic looseness into a razor-sharp cut in an instant. And he conducted them with the swing of his neck, the jab of his guitar, a sudden scream.

The songs sounded long and sprawling, even when they weren’t. He wandered a lot, physically, musically, mentally. During The Ooz’s title track, Fazerdaze joined the band to recite a poem while Marshall sings a refrain into the microphone-less air, “I don’t know why!” This was not music for the attention-deficient. Marshall leads on guitar, making three chords sound like twelve by varying his playing every bar, making sure nothing comes too easy, too catchy, too predictable.

When I first heard The Ooz, I clicked through it in less than half it’s hour-plus running time and never clicked on it again. It wasn’t until I was sent the album on LP that I put it on and played it through and then played it again. And again. For me, who grew up on physical formats, it was music that needed that time, that commitment. It was an album to be played from start to finish, not necessarily on vinyl or anything, just on something that dissuades you from clicking away the moment something isn’t instantly rewarding. But, it became clear in the rain last night, that this is my problem, not his.