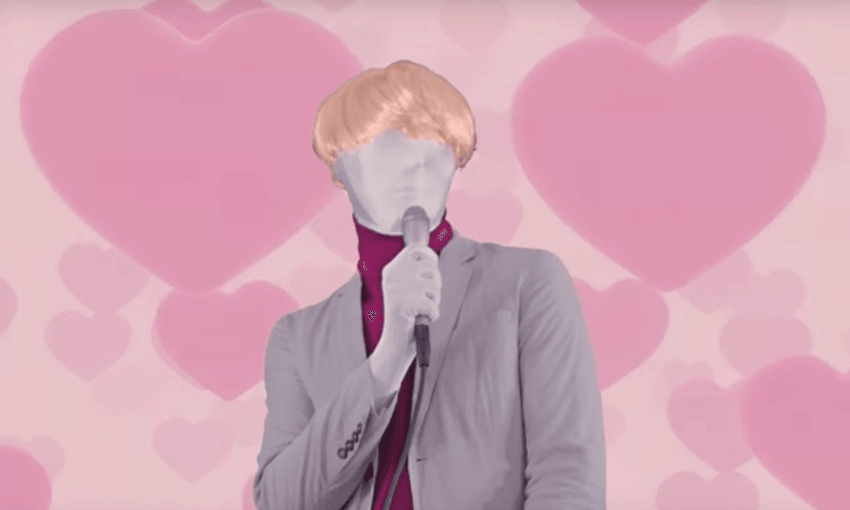 The Spinoff presents the video premiere of Jonathan Bree’s ‘Valentine’, just in time for a heart-broken Valentine’s Day!

I’m yet to overcome the magic of green screens. From early days of my parents hosting New Wave parties within the deep suburbs of South Africa with MTV gleaming in the background, the glitches and hard edges have always been sources of inspiration in everything I do. Music videos from Sisqo, B-52s and most recently, trainwreck vids like Kanye West’s ‘Bound 2’ blow my mind at how entire production agencies, at the time, thought they were above-board and TV-ready. When Jonathan wanted to create a green screen-dependent music video for his latest release ‘Valentine’, I was so excited to find out we were on the same wavelength, and together we started figuring out how we could achieve this, and better, in a home-studio environment.

We filmed the entire thing in Chelsea (Nikkel, musician and Bree’s partner) and Jonathan’s living room, blacking out all the windows and building a full-length green screen. We bought some LED work lights from Bunnings for the wash, and a couple of studio lights to make things sparkle a little. It basically looked like a meth lab from outside, but the results were great.

Jonathan wanted to make sure the theme sat consistently with the last ‘You’re So Cool’ video featuring turtleneck sweaters and 60’s boyband hair. I really wanted to push these elements giving the video a modern look through colour and resolution, but still maintaining this ’60s style. We didn’t want it to feel like these figures existed in any certain era, but instead as if they were from a time when the only reference they might have had was a Beatles LP cover; kind of like how we interpret ancient history. I think this is the overarching theme that will continue through the Jonathan Bree music videos in the future.

What interests me about the masked characters is that, in removing their natural human features, you expose the only things left that we relate to being human – clothes, hair accessories, their movement – things that could be switched out to create a different opinion of the same figure. Before we shot, I really wanted to play more with the nails and lashes to give the girls a bit more pop. Under Jonathan’s direction, they took a life of their own in the edit and were really fun to work out their interactions in the piece.