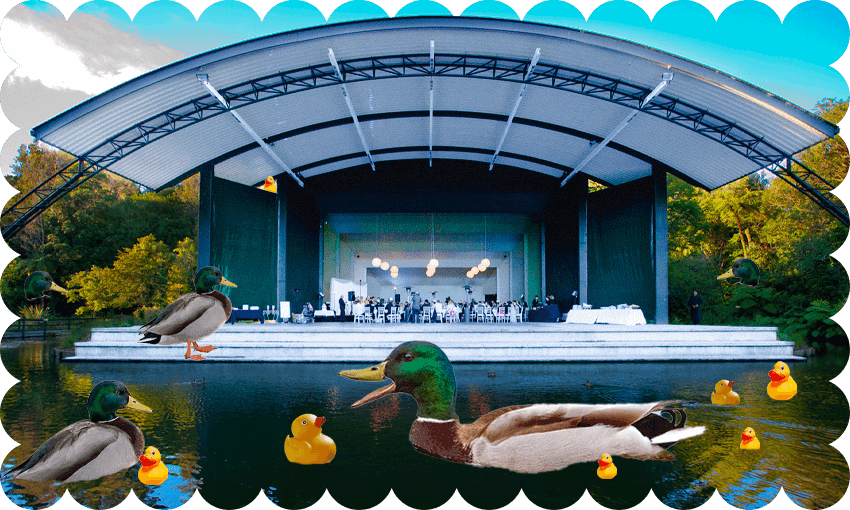 He sang, he shrieked, he beatboxed, he pulled off a pretty decent cartwheel, and then he tried to breakdance. In 2016, at the age of six, my son made his live performance debut at a venue that can hold 15,000 people. He was undaunted by the occasion, pushing his tiny frame to dance from one side of the massive stage to the other, before bowing to the applause and exiting stage left.

It was picturesque, serene, a special family moment that Facebook reminded me of recently. Footage taken at the time shows a beautiful moat glistening in front of the stage, separating my son from the crowd.  That video also shows my son returning after his performance, sticking his head around the corner so he could see the audience’s reaction.

The response was rapturous — as rapturous as two adults, one baby, and about 50 ducks can be, anyway. We were the only ones to witness my son’s impressive impromptu display that sunny day at the Bowl of Brooklands. While picnicking on a grass bank, distracted by the demands of a toddler, he’d gone exploring and found an open gate that led onto the stage.

New Plymouth is one of our family’s favourite places to visit. People laugh when I say this, but I’m serious — you can’t beat the surf beaches in summer, or Mount Taranaki in winter. The museum is ideal for kids, the waterfront walkway is great for an evening stroll, and it’s got one of the best vantage points to scoff burgers and shakes in your car if it’s cold.

We’re going again in a couple of weeks, and once we’re settled in we’ll be heading straight to Pukekura Park. If you haven’t been, grab a coffee and a maple glazed doughnut from The Public Catering Company, then go for a wander. You’ll find several hours of entertainment, including a stunning cricket ground, lush greenery, a great playground, a free zoo, and, at Christmas, a really incredible light festival.

If you wander far enough, you’ll come to a small bridge that leads into a grassy amphitheatre, a picture-perfect spot that is surely New Zealand’s best outdoor music venue. Promoters love booking artists there, because artists love playing there. As Elton John, Fleetwood Mac, Santana, The Pretenders, Neil Finn, Maple Staples and Don McGlashan have discovered, it’s an arena like no other.

When it’s not Covid times, the Womad festival is usually held there too. It’s also the place where one of my favourite concert photos (taken at a show performed by one of my least favourite musicians) was snapped. And when R.E.M. performed there in 2005, some remember fans jumping into the moat during the song ‘Nightswimming’. How could you not?

Every time a major act plays there, they’re separated from fans by the stretch of water surrounding the stage. While you can dip your toes into the surf at Splore, stroll through grape vines at Rhythm & Vines, or snuggle onto a picnic blanket with a glass of wine at Villa Maria, no other stage in Aotearoa is separated from the crowd by a body of water.

This is what makes the Bowl of Brooklands special. It’s what makes it unique. It’s the first thing people talk about when they go to a concert there. I still remember the chills I got from Aldous Harding as she spat ‘Heaven is Empty’ out and across that water during a spine-tingling Womad performance.

But some want this to change. As journalism legend Jim Tucker discovered earlier this year, and as reported by RNZ over the weekend, a New Plymouth District Council discussion document suggests that the moat should go. Permanently covering it would allow venue capacity to expand from 15,000 to 20,000, making it a more attractive proposition for promoters, thus meaning more visitors to New Plymouth.

It would also save money, as that same council spends $70,000 covering the moat up every time a major act plays so it can fit in more people into the venue. “You’ve got to ask yourselves … do you want to be a straight-up really attractive proposition?” promoter Brent Eccles told RNZ. “I think it’s a small concession to cover the moat.”

Basically, he wants it to go from this…

Don’t do this. Put the discussion document in the shredder and forget it was ever suggested. Without the moat, I bet my son wouldn’t have wanted to perform on that stage – and whether the crowd is 50 ducks or 15,000 people, the same applies to touring musicians. Please, for ducks’ sake, leave the moat alone.