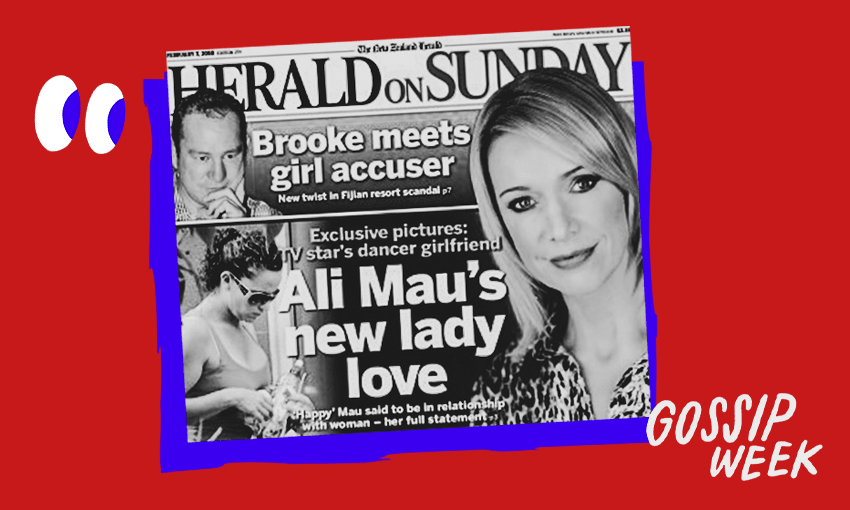 The front page of the Herald on Sunday, February 7, 2010 (Image: Tina Tiller)

The front page of the Herald on Sunday, February 7, 2010 (Image: Tina Tiller)

Gossip Week: In the late 2000s, Ali Mau couldn’t leave the house without being followed by paparazzi. She tells Alice Webb-Liddall about the impact gossip mags have had on her life, and how the traumatic experience has made her a better journalist.

“A paparazzi photographer has been stalking me, my children and my friends for a month now,” says journalist Ali Mau, a deadpan look on her face as she stares down the camera. “Give me an idea when the dogs will be called off and me and my friends and family can go about our business without having a creepy guy in a Corolla station wagon following us around,” she pleads, before directing viewers to email the Woman’s Day editor themselves.

It was 2010 and Mau was filling in on TVNZ’s Breakfast with Pippa Wetzell. During their regular “What’s in the women’s mags” segment Mau seized the opportunity to hit back at the local magazine editors who’d been making her life hell. It was her final, desperate play in a months-long war, with Mau alleging a photographer had been stalking her and her kids to put together a story about her love life.

“The editor of Woman’s Day got inundated with emails from Breakfast viewers,” Mau recalls now, over a decade later. “It was a personal plea: when am I going to be left alone? When?”

Mau has appeared on New Zealand screens for over two decades, the face of shows including Newsnight, Breakfast and Fair Go. She became a household name during her time on One News from 1999 to 2003, which she presented with then husband Simon Dallow. They were a power couple by all definitions, which meant there was little they could do about the relentless media attention.

In the mid-90s, Mau and Dallow graced the cover of Woman’s Day celebrating their engagement. They appeared again when they married a year later, having sold exclusive shots of the big day to the magazine. About a year and a half after the wedding, when Mau was expecting her first child, she was approached by numerous publications asking for pregnancy spreads.

“We were approached several times and asked to do a spread and I refused. I didn’t want to be photographed pregnant. I was still reading the news every night up until the day before she was born, so it wasn’t a vanity thing. It was just private – it was my first pregnancy and I and Simon felt that we wanted to keep it private.”

Just four weeks after giving birth, Mau was contacted by Woman’s Day, who told her they had just bought a series of photos of her newborn baby Paris in her stroller for $3000. Mau recalls her shock and confusion as the person on the phone explained she and her baby had been snapped through a window in Mt Eden earlier that day.

The magazine ultimately agreed to give Mau the photos instead of publishing them. At 11pm that night, the editor dropped the photos off at Mau’s house. “There were close up shots of Paris’ little squishy baby face and I felt – well, violated is going to be too strong a word – but I had strong feelings about it.”

Since then, Mau has only done a handful of cover stories for women’s magazines – a feature when her daughter Paris was six months old (a way of thanking the magazine for not publishing the newborn photos, she says), and again when her son Joel was a similar age. “I can’t stand magazine covers with newborns,” she says, laughing. “They’re so ugly.”

When Mau and Dallow decided to divorce in 2009, she knew it would mean another onslaught by gossip mags wanting the story of their separation. Working closely with the PR department of their employer, TVNZ, the former couple released an announcement to front-foot the news.

Mau says the period that followed was a “truly horrific time” in her life. She remembers a paparazzi photographer being stationed outside her house for days on end, his long-lens attempting to get a snap of Mau and her children. She was tailed by a slow-moving car whenever she went to get coffee. And things were about to get worse before they got better.

When rumours began to circulate that Mau had begun a new relationship with a woman a year after the separation, both the Herald on Sunday and Woman’s Day outed her on their front pages. “Ali Mau’s new lady love – A high-profile TV-star marriage split takes a new twist,” one headline read.

In the Herald on Sunday story, a statement from Mau asked that discussion of her private life be left out of the public. “I said in June last year that my children were my most important priority,” the statement read. “My position on this has not changed. I’d like to hope that the New Zealand media will be responsible and continue to respect my children’s right to privacy.”

Mau felt bombarded and trapped by the coverage. There was nowhere she could go to get away from the constant watching gaze of the media. She could barely leave the house without seeing her face in print. One day, her youngest child came home from school, excited to tell her what he and a friend had decided to do should a photographer ambush them.

“He was eight and said, ‘So, Mum, Andrew and I have a plan for when the photographer jumps out of the bushes. Andrew’s going to shout at them while I run away.’ I went out of the room and I cried and cried.”

Over the years since, Mau has received apologies from many of the reporters who harangued her during that stressful time in her life. She says she sympathises with many of them, particularly those who she believes were only acting at the command of higher-ups.

Some have been less forthcoming. When covering a trial at the high court three years ago, Mau found herself in the media pit with the paparazzo who had been parked outside her house all those years ago. Initially, she says, he refused to tell her his name, instead saying, “you don’t want to know who I am”.

Mau says she’s also spoken since to editors involved in the decision to out her. They told her they’d “never do something like that these days”, she says. Over a decade on, Mau hopes the gossip industry has changed for the better. She says social media is putting a lot of control back into the hands of the celebrities and their audiences.

“We are starting to examine what we read and look at a bit more closely and see who it targets and who it leaves out nowadays. I feel like magazines have more of a precedent to be good and do good now because people aren’t buying them as much.”

Just last month, Mau won Reporter of the Year at the Voyager Media Awards. Recognising her work creating Stuff’s MeTooNZ and telling the stories of sexual harassment that has highlighted imbalances of power in every industry from hospitality to music, judges lauded Mau’s “fearless, determined pursuits that deserve the highest commendation”.

That approach, she says, has been informed by the way she was treated by the media in the late 2000s. As traumatic as her experience on the receiving end of the media was, Mau says it’s made her a better and more empathetic journalist.

“The work that I do is exclusively people’s excruciatingly personal stories of harm,” she says.

“In some ways that experience was foundational for my work now because I know what it’s like to have your private life splashed out there on the page and not be in control of it.”