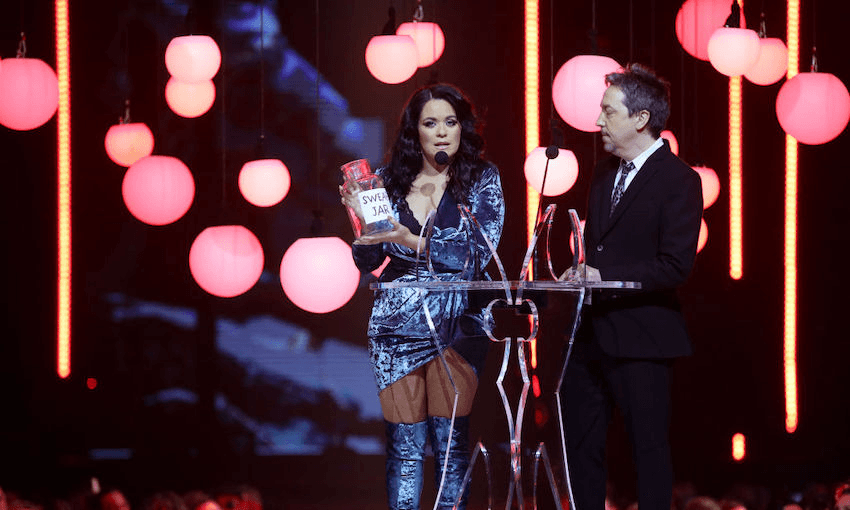 The VNZMAs were pure chaos and an extremely good time

BENEE cleaned up, every performance was somewhere between an eight and a ten, there was an unfeasible quantity of award presenter awkwardness and many nights ended very late. The music awards are over 50 and still absolutely rule. Here’s why:

Avantdale Bowling Club took out best hip hop album, and Tom Scott sassed hard. He started with the night’s sponsor: “We all know this is a big advert for a telephone company anyway, that support third world labour and don’t even employ New Zealanders. Maybe we could outsource this next year to Bangladesh…”. A bold statement to make when you’re surrounded by Vodafone employees. Stick it to the man, as Andrew Lloyd Webber once wrote. Then he came for the prime minister: “Jacinda should visit Ihumātao. Just go there.” Scott’s acceptance speech wasn’t televised. Coincidence?

Rumour has it that Matt from Beastwars, a grizzly shaman-like character who recently beat cancer, punched Neill, a marketer, from Villainy for a derisory ‘sorry you lost’ comment, after Villainy took the best rock award for the third time. The whole situation is metal as hell. (UPDATE: A Warner rep has been in touch to say that “it was just all part of some friendly backstage banter between two great mates who are going on a summer tour together. Also just FYI, Neill works in marketing, he is not an accountant.”) The Spinoff stands by its story, but has amended the above to reflect Neill’s role.

Best speech of the night goes to MC Tali, a stalwart of the New Zealand drum n bass scene who stuck with the genre long after many abandoned it. But having toiled in this largely underground scene for 18 years, she was unrepentant in wanting to enjoy her big moment. She was emotional, thanked her friends for buying $300 tickets to come and support her, and encouraged more women and femmes to take up MCing, DJing and producing. She also, rightly, pointed out that while drum n bass might not be super fashionable right now, it’s used to motivate the All Blacks and sell a lot of products on TV so stop being so judgey.

Troy Kingi is the truth

Recipient of three simultaneous haka on winning Best Māori artist, Troy Kingi hit the music awards like a train last night. His performance was immense, the best of a very good night. He’s the kind of artist the VNZMAs have sometimes failed to recognise – super prolific and successful without being particularly commercially-minded. Thankfully he got a moment, and made the absolute most of it. On stage last night, whether speaking or performing, his talent and charisma blasted out, and he has the air of someone still figuring out where he’s headed in a very winning way.

Josh Fountain finally got his

He’s been making bouncing, melodic pop songs since Kidz in Space, and has credits on a decent number of the best New Zealand pop singles of the past decade. But while contemporaries like Joel Little have blasted to stardom, a true breakout international hit has eluded Fountain. Yet in BENEE he might have found his foil, her energy and aesthetic mapping beautifully to Fountain’s own. He hugged the prime minister and added a ‘single of the year’ trophy (shared with BENEE and fellow Leisure wunderkid Djeisan Suskov) to his producer of the year title, then stood, rightly beaming that this moment had finally arrived.

The Good Awards will not be televised

It’s not unreasonable that the producers don’t televise every award – it’s a long night as-is, and filling ad breaks with banter would mean that we, the viewing public, might not get the opportunity to watch five minutes of Dave Dobbyn shifting uncomfortably in his seat as the hosts do comedy raps about songs he wrote 35 years ago. Still, with the at-home broadcast missing both the Rap and Soul / R&B categories, it’s hard to understand why we opened the show with two straight Six60 appearances. The ‘Most Airplay’ and ‘Highest Selling’ categories aren’t insignificant, but they’re also the only awards directly linked to consumption. Is being able to pay all of your bills without also picking up Uber Eats shifts after studio sessions not enough of a reward?

BENEE is a born star

She was the star of the night but still every inch a teenager: goofy, cute, experimental. She used words like ‘heckin’ and ‘shiznits’ in place of swear words in her four acceptance speeches of the night. She’s a delight and her music bangs, although we were really holding out for a te reo or at least bi-lingual live performance of her hit ‘Soaked’, as heard on the excellent Waiata/Anthems compilation.

Was a lot. At one point in the evening it got up and walked away from Mulligan, blowing kisses as it went.

The prime minister’s sparse presentation of the Best Pop Single was staged to look like it was sprung on her at the last minute, on live television. Despite it being pre-planned and choreographed, the lack of any speech landed awkwardly – especially given its proximity to Avantdale Bowling Club’s Tom Scott’s callout (see above).

Sponsors had a bad time

Music has had a tough millennium-to-date, losing somewhere around half its revenue to the digital transition. That downward curve switched direction a few years back, and the awards were studded with young artists radiating cool and who feel like they instinctively understand the new environment. Still – these are green shoots, not trees, which is why the frequent shots at various sponsors and media partners caused some serious industry wincing. From Tom Scott’s attack on Vodafone to the hosts’ jabs at MediaWorks, it wasn’t a great night to be a sponsor.

The most brutal of the night was reserved for Spotify, who were in the room, over from their Australian office. When Drax Project won international achievement, a giant cheque for around $37 was brought out, a play on the fact royalties remain thin for artists. But for those working to get the awards back to their ’00s heyday, it was the kind of jab which works in the room – while making life much harder outside of it.

Mitch James has been on the protein

Maybe we just weren’t paying as much attention, but we swear he wasn’t that jacked last year. A question for Mitch: do you have any F45 discount codes?

The ceremony was either brilliant or shambolic

Do you know why you don’t often see award shows with the hosts standing right in the middle of the venue, rotating every few awards for a different angle? It’s because, at any given moment, about 75% of your audience has a bad view. Which doesn’t matter so much if you’re watching from home, but if you’re actually in the venue, you spend half the time looking at people’s backs. Another reason you don’t see it very often is because that staging makes it very hard to give your hosts or presenters an auto-cue, so they end up reading off cue-cards. That’s why the Jon Toogood spent most of his night looking down at paper, rather than at the camera or his co-host, Laura Daniel.

Combine that with near-constant mic feedback and transitions that had the hosts standing in darkness on live television, and you’ve got an awards ceremony that had a little too much in common with a high school prizegiving, not New Zealand music’s biggest night. The ceremony was saved by the true joy of the winners, and a series of electric performances

A record company executive found $150 in the toilet