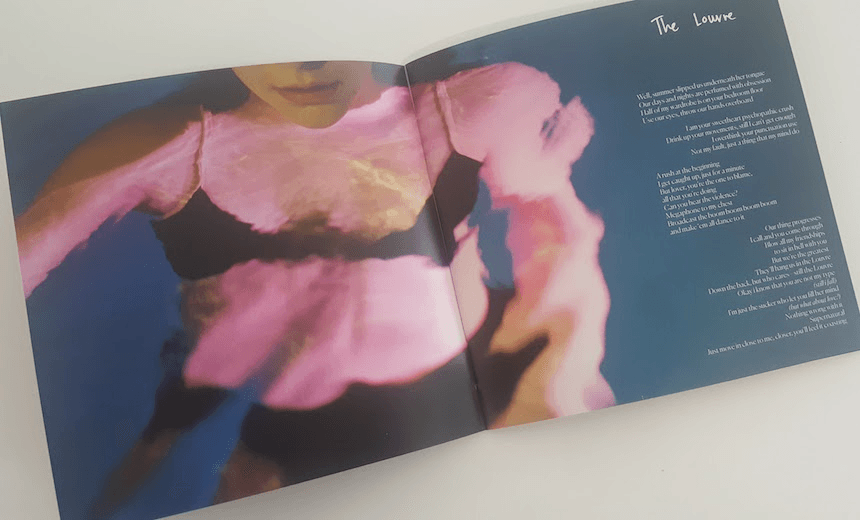 Like the rest of the internet-having world, Sam Brooks has been listening to Lorde’s new album today. Unlike most of the world, he writes plays for a living. Here’s his interpretation of his favourite song from the album.

The following is what happens when you sit in The Spinoff, rushing through your first listen of Melodrama so you can be one of the cool kids, and you tweet “If I could put this whole song into a play I would be one of the best playwrights ever” about ‘The Louvre’ (which I think is the best song on the very good album) and you get dinged for it.

This is an incredibly short play I wrote about The Louvre.

A house, probably in Auckland. Probably on the North Shore. Postcode 0624, you get where we’re going with this.

It’s about 10:30PM. It’s a real proper average teenage party, no more than fifteen people at any one point because people are coming and going from other’s parties. This one is Lou’s party, but there’s also Kaylee’s party that everybody has to go because Scot (with one t) broke up with her and it’ll be a whole thing if nobody shows up, and then there’s Joe’s party but Joe has a party every weekend because his parents have decided to be his friends and not his parents, and nobody goes to Joe’s parties anymore because they end up pretty sad.

There are Kettle crisps at Lou’s party. There are RTDs that Marty’s creepy older boyfriend he met on Tinder bought for everybody. But they’re disgusting so Aroha is mixing them with her dad’s bourbon, bourbon she’ll later have to tearfully say she didn’t steal but her dad knows she did because he was also young once.

Nobody can afford a speaker so someone has volunteered their phone to be put in a bowl to act like a speaker. Spotify ads play every thirty minutes because nobody is spending their minimum wage pay, or spending their $10 weekly allowance they don’t really need, on a Spotify subscription.

There’s a girl. Let’s call her Mary because she’s probably called Mary. Almost all girls at parties are called Mary. She didn’t want to come to this party, but she had to because she went to Kaylee’s party, so she got out of her comfy hot-water-bottle-warmed bed, she put the barest minimum makeup on, and she told her parents she’d be home by 11 because she absolutely didn’t want to be out in the first place.

Mary’s at the party. She’s not drinking one of the RTDs, because they’re literally poison, but she scabbed a beer from someone and is doing a real good job of pretending to look like she wants to drink it.

There’s a guy. Let’s call him Simon because he’s probably called Simon. Almost all guys at parties are called Simon. And like all guys at parties, he is kind of the worst. He actually wants to be here, that’s how bad he is. He’s here with, as the kids say, ‘the boys’. He’s here to crack open a cold one. He’s not actually the worst person, but in the company of ‘the boys’ he does a good job of acting like one of the worst.

Mary knows full well who Simon is. He goes to school with her older brother, who she never talks to because she hates him, but they’ll probably be friends when they grow up because that’s how human beings work. She knows he’s kind of shitty, actually more boring than shitty, which is kind of shitty in itself, but he’s fine.

Simon also knows full well who Mary is! Because he’s known Mary since primary school and they’ve talked a few times at camp and at parties and stuff, and blah blah blah, you know this part of the story. Unrequited love, teenage angst, Fall Out Boy or their 2017 equivalent. You get it.

A Spotify ad plays. Someone makes a terrible joke about how it’s their favourite song. This person has made it before, they will make it again. They will make it about 20 times this night. Despite this, people will keep inviting them to their parties. This person is the worst. They write comments on the internet, on YouTube videos, on Stuff articles for god’s sakes.

Then ‘The Louvre’ plays. People don’t recognise it off the bat. The opening riff doesn’t sound like anything familiar, but it sounds real cool. Then Lorde starts singing and everybody is like ‘Ohhhh.’ and they stop listening to the song because they too are the worst.

Mary starts listening to the song properly and stops looking at Simon, because the song is infinitely more interesting than Simon is, and ever will be. She laughs at some of the lyrics. She’s felt them before. She knows them.

“Half of my wardrobe is on your bedroom floor” – That’s me, Mary thinks, even though that’s not the case and never has been.

“I overthink your punctuation use” – Yeah, what does his exclamation point mean!

“Blow all my friendships to sit in hell with you” – I have done that, Mary thinks. I went to Albany Mall with him rather than with my best friend Lou!

“They’ll hang us in the Louvre. Down the back, but who cares – still the Louvre” – That’s in Paris! thinks Mary.

How did this Lorde person put words to her feelings?

She thinks this like she’s the only person who has ever thought this, even though that’s what music has been doing since more or less the start of time, Mary. God. Have you ever heard of ‘Teenage Dirtbag’, Mary?

Suddenly Lou, the host of the party, who has not been having a good night, because every teenage host of a party never really has a great night, screams:

“THIS SONG IS ABOUT ME.”

She throws up immediately.