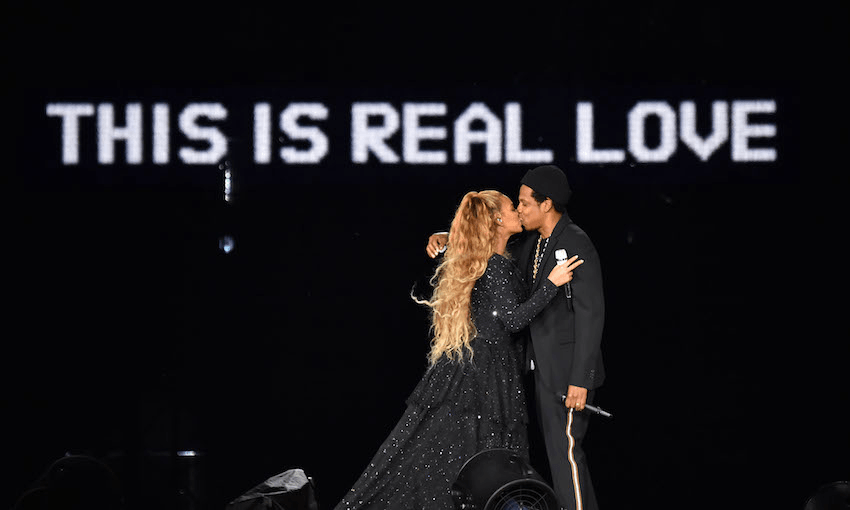 Beyonce and Jay-Z, “On the Run II” Tour on 9 June 2018 in Glasgow, Scotland. (Photo by Kevin Mazur/Getty Images)

Better together: Beyoncé and Jay-Z’s ‘Everything Is Love’, reviewed

By Jogai Bhatt
Guest writer
Made possible by

Beyonce and Jay-Z, “On the Run II” Tour on 9 June 2018 in Glasgow, Scotland. (Photo by Kevin Mazur/Getty Images)

Yesterday, Beyoncé and Jay-Z’s album ‘Everything Is Love’ was released with no warning. Is it any good?

If Lemonade was the release and 4:44 was the repentance, then Everything Is Love is, indisputably, the glorious reconciliation. Over the weekend, the Carters released the closing chapter of their conceptual trilogy via the online streaming service Tidal. It’s a nine-track collaborative record chronicling the couple’s infamous run-ins with infidelity, power, and triumphalist vindication.

A joint project had been long rumoured, even prior to 4:44. Hov confirmed speculation in an interview with the New York Times earlier this year, saying the couple were using their art “almost as a therapy session” – a way to work through their issues in the public sphere while maintaining control of the chaos. Despite the tip-off, Everything Is Love still arrived in true Knowles-Carter fashion: with zero advanced promotion or warning. As reports suggest, the pair concluded the second night of their On The Run II tour show in London, and left fans to take in the enormity of a casual “album out now” projected on the screen.

Everything Is Love is more deeply rooted in hip-hop than in the sort of contemporary R&B traditionally associated with Beyoncé. On ‘Apeshit’, Beyoncé raps more than she sings, and with due respect to Hov, out-raps the god himself. Her flow is informed by Quavo and Offset, who serve additional vocals on the track. And paired with Pharrell Williams on production, it’s not hard to see why the trap-heavy track would be released as the first feature and visual.

The music video only reiterates the kind of power and grandeur the Carters hold. Cavorting around the Louvre in Paris, the two rap in front of an Egyptian sphinx, and we catch brief glimpses of a pair of black figures in Paolo Vernese’s The Wedding at Cana, as well as Marie-Guillemine Benoist’s Portrait d’une Négresse, which depicts a black woman staring back at the viewer. While for the most part the video highlights neo-classical French paintings – white subjects, white artists – it also provides an elegant backdrop for the biggest flex in modern history, with two black artists claiming one of the centrepieces of white European culture in gleeful defiance.

The heavier trap beats are cushioned by the mellow ‘Summer’ where the Carters reaffirm the narrative of their marriage as one defined by enduring love. ‘Summer’ feels like the dazier counterpart to 2013’s ‘Drunk In Love’, with similar thematic references to the beach. Beyoncé croons through a score of strings and slow drum beats, and Jay responds accordingly. Meanwhile, ‘Boss’ steers us in a direction closer to her legendary Coachella performance earlier this year, with horn riffs and a simple clap loop nodding to HBCU marching bands while the Carters gloat over a heavenly beat. Hov takes shots at the likes of Drake and Lil Wayne, and Beyoncé takes a moment to remind us of her legacy: “My great-great-grandchildren already rich/ That’s a lot of brown children on your Forbes list.” The track closes with Blue Ivy offering a message to her younger siblings: “Shoutout to Rumi and Sir / Love, Blue.”

‘Nice’ presents Hov as I love him best, on an infectious post-chorus following a no-fucks-given verse addressing subpoenas, misdemeanours, Drug Dealers Anonymous, and disproportionate incarceration, with a flow that’s unmatched. Held together by a haunting “I can do anything / Hell Nah / Hell Nah” from Pharrell and Beyoncé, ‘Nice’ is an uplifting hip-hop anthem. Honourable mention goes to Beyoncé’s blunt explanation for keeping her last album a Tidal exclusive: “My success can’t be quantified / If I gave two fucks about streaming numbers, would’ve put ‘Lemonade’ up on Spotify / Fuck you, fuck you.” Immaculate.

‘713’ similarly puts the spotlight on Jay, serving as a straight reminder of his storytelling capabilities, In it, Beyoncé borrows a hook Jay wrote earlier in his career, interpolating the chorus of ‘Still D.R.E’ by Dr Dre and Snoop Dogg. The track also flips Common’s ‘The Light’, where he raps “I never knew a luh, luh-luh, a love like this / Gotta be somethin’ for me to write this / Queen, I ain’t seen you in a minute.” With such intricate sampling in mind, I can expertly conclude that this homage to Houston is, objectively, very, very good.

‘Friends’ switches things up again, with slow keys and trap hi-hats embracing Beyoncé’s refrain: “Come pull me up, pull me up, pull me up / And never let me down (they never let me down)”. ‘Friends’ is a love letter to those who exhibit unflinching loyalty. As a result, it highlights the cracks in the Carters’ previously suffering relationship. Jay raps with transparency: “If me and my wife beefing, I don’t care if the house on fire, I’m dying n—-, I ain’t leaving.”

‘Heard About Us’ also addresses the conjecture about the Carters’ marriage, firing out a firm warning to the haters: “Already know you know about us, no need to ask you heard about us, watch your mouth when you around us.” A verse that starts with Yoncé taunting you can only end with Yoncé taunting you, and she does so seamlessly, before Jay takes the opportunity to address his own rumours. “Billie Jean in his prime / For the thousandth time, the kid ain’t mine / Online they call me “dad, kiddingly / You’re not supposed to take this dad thing literally.” As Jay dispels any notions of a secret son, Drake quietly plots his next move.

Then comes one of the most poignant moments of Everything Is Love. In ‘Black Effect’, Jay references police brutality and the American legal system, with nods to Trayvon Martin, Meek Mill, and the ’60s civil rights movement. Beyoncé takes a backseat, providing adlibs here and there, but Jay carries the track. There’s something comfortingly nostalgic about the whole track, and it’s a perfect penultimate statement before the album’s playful close.

‘Lovehappy’ celebrates a renewed love, one stronger and happier than ever before. Through back and forths like “You fucked up the first stone, we had to get re-married / Yo, chill” to “We keeping it real with these people, right? / Lucky I ain’t kill you when I met…”, the Carters come out of Everything Is Love as an unbreakable unit. They’re regal, they’re untouchably prosperous and, as this record proves, they’re better together.