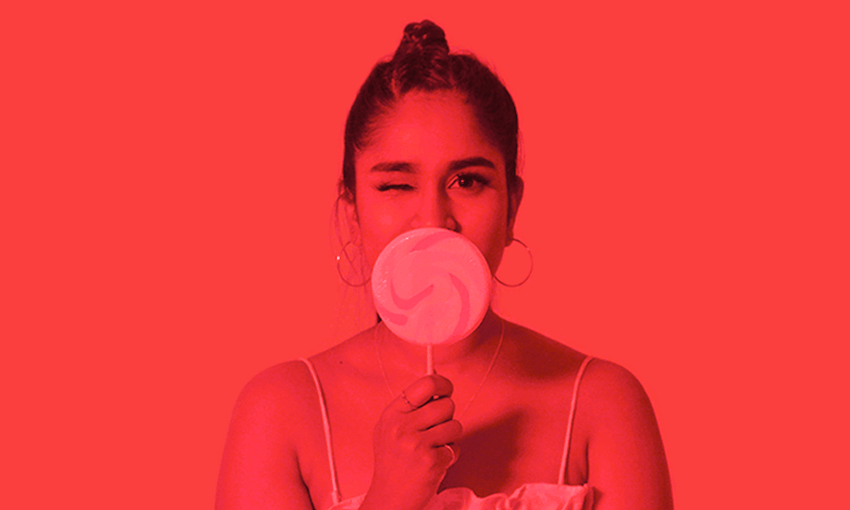 Christchurch singer Ashy is poised to be New Zealand’s next popstar.

ASHY: The young Christchurch artist poised to be NZ’s next big pop star

Christchurch singer Ashy is poised to be New Zealand’s next popstar.

Sam Brooks talks to ASHY about her brilliant new single ‘Temporary Crush’, the hustle of being self-managed, and her hopes for 2019.

I ran into ASHY’s music completely by accident. Every week I do a trawl through a few new music playlists to make sure that I, as someone who writes opinions about music far too often, knows what is good and what is bad. Usually my first stop is the Popjustice New Music Friday playlist, a definitive list of the best pop music from around the world every week.

Nestled around the middle reaches of that week’s playlist was a song called ‘Temporary Crush’.

Two things about ‘Temporary Crush’ struck me. First of all was the singer’s careless, tossed off vocal; full of personality and charisma without being overbearing or self-consciously theatrical. Secondly was the unashamed big pop sound of it, from the subtle drop on ‘crush’ in the chorus to the stabbing synths, it sounded like it could’ve come out of the Max Martin Factory (aka the entirety of Swedish pop music).

I didn’t even realise the artist was a New Zealander until I looked her up. The Christchurch-based ASHY had done little press, but had a few other good songs under her belt (the heavier, dubby ‘Over You’ and the playfully trippy ‘Jersey’) and ‘Temporary Crush’ felt like a definitive artist statement. ASHY was not here to play at pop, she was here to make it big in pop.

A few quick tweets, some emails to a publicist, and I was sitting in front of ASHY a few days later, ready to talk to her about this great new song, and what the rest of her year had in store.

ASHY: Good, good – yeah, so good! I just flew up from Christchurch yesterday, so.

It always helps. So I heard Temporary Crush on an international playlist, and I thought “Who is this ASHY person?”, and I was like “Holy shit, she’s from Christchurch, great! Let’s have a chat then.”

How did you transition into making this kind of pop?

I started when I was 11, I started learning guitar and singing at the same time. Then when I was 13 I started writing my own songs, and I entered a lot of competitions and stuff down in Christchurch – there’s a pretty big music scene down there.

So when I left school, I was like “I wanna do this, for real.”

I’d always wanted to be a recording artist, so I wrote a lot, emailed a lot, hustled a lot, and started working with a producer up in Auckland, which led to me coming up here.

Scott Seabright. He worked out of Roundhead Studios when I first met him, and then he kind of branched off and just worked anywhere.

Then after that, with my latest single I worked with Josh Fountain at Golden Age Studios, which is where Lorde started, so I was so stoked.

It’s been two years of working out the industry and how it works – especially in the pop world, because it’s kind of different to playing guitar and singing.

But those are still core, basic skills, right? How do they translate to these bigger productions that you’re now releasing?

When I’m writing, I tend to write with a guitar, but a lot of the ideas are born kind of on GarageBand, and I record them on my phone.

Then I take the whole songs to the producers and see how they interpret them. With ‘Temporary Crush’ it was a bit different, and I was brought into a co-write session; Josh just played me some chords and was like “Do you think you can write this?”

So I listened and was like, “Uh, well let’s just do it, let’s see how it goes!” and it was born in a day, it was really cool and very fast. I think when something’s good, it’s fast, and you get it done very quickly.

It’s like when you cut wrapping paper, right? When you cut, and it just slides on through, and it’s just easy – it’s right and exactly how it should be.

Yeah, exactly, it seems easy. I really found that with this song, I feel like it’s very catchy, which I was excited about.

It has a super-fun hook.

I’m so so happy about it. The feeling in the room was that it was good, this song was good, and we had to pursue it, because we didn’t know if we were going to come out with anything. I’m just really excited.

And what was the process of filming the video? How was that? Was it a huge thing for you as well?

I really wanted this video to be really fun, honestly, that was my objective. And so I just made it colourful – colourful and fun, and I think it perfectly represents the song. It’s simple, but it’s also flirty and sassy. The entire thing was filmed in a studio, with just me rocking out to the song.

I got to be glammed up and everything, can’t complain!

So what’s it like getting such a great response to the song? It’s happened so fast. How does that feel after hustling?

It’s really, really satisfying. I think that the main melody, hook, is so me – just making it a tiny bit different than what you’d expect. But it is really satisfying, especially because I’ve spent a lot of time trying to figure out how the industry works. When you come from high school, and you’re just, you’re so lost, you’re like “where do I begin?”

Everything must seem so huge, like ho do you even go “Hello, here’s myself and my song!”? There’s no easy hints or directions as to who to talk to or who to go to, you’re just expected to know it.

[One of] the first things I had to do was just put out songs, because there’s nothing to support me but songs. I’m still self-managed, I’m still handling everything myself, which I love.

How’s that? How do you balance the creative side with the admin, just being like ‘okay, go here, email here, invoice here, invoice there’? How do you handle that at 19, which seems crazy young to be doing all of that stuff?

Yeah, it is really crazy, especially very daunting when you leave school. There truly is no way to go about it, there’s no steps like when you go to uni. There’s no degree you can do that will get you there. So it really was just about really learning about how to work my way up.

It was really hard to balance. Last year I was doing way more of the business side than the music side because I’m just trying to get ahead, get a name for myself.

But this year has been so, so good because I’ve finally got things out, and people are starting to get a grasp of who I am as an artist, which is really exciting. But I still love being in control of everything and overseeing everything, that’s just kind of who I am.

You just have to have your hand in everything. Hands in all the pies! So what’s the dream for 2019? In your mind, what would the best year look like?

I really want to go overseas, maybe LA, and record a song over there. But I also want to open for an international act that may come to New Zealand, that would be so so cool. I just plan to release a lot more music this year. I have so much written – it just needs to be produced!

I’m really really excited for this year. It’s gonna be a busy one – it already is a busy one, actually!

This piece, as well as ASHY’s single ‘Temporary Crush’, was made with support from NZ on Air.