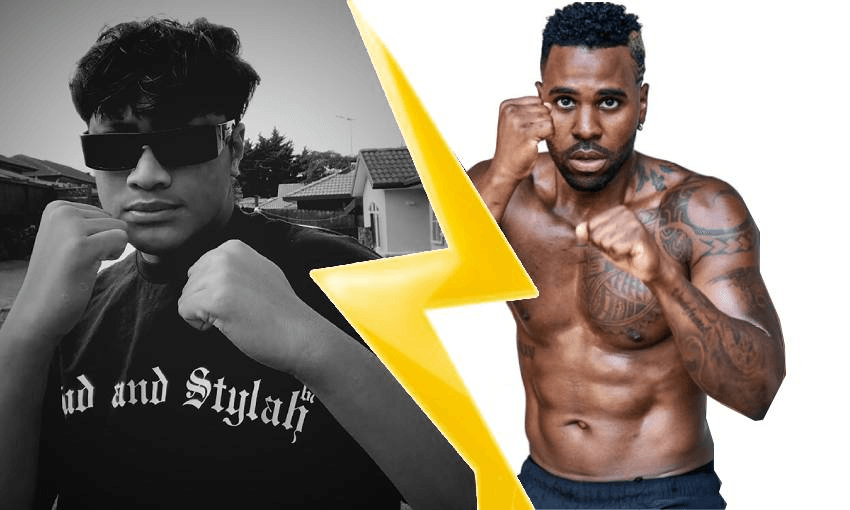 Jason vs Jawsh: The drama behind the song that’s hot on the Tok

Allegations have been made about Jason Derulo’s use of a New Zealand teen’s music for his new song. Here’s everything you need to know about the controversy, the teen, and how TikTok is driving it all.

Who is the teenager?

Jawsh 685 is a 17-year-old from Manurewa. He has some serious music production chops and was recently signed to Columbia Records. He’s also managed by Ashley Page, who’s probably most notable for his work with a certain Joel Little.

Jason ‘Jason Derulo’ Desrouleaux is a 30-year-old R&B artist from Florida. He has 11 platinum singles and three Teen Choice Awards. He’s also extremely prolific and weird on TikTok, with videos featuring his pet snake, truly disgusting recipes and bizarrely edited dance sequences. With the help of the platform – and Jawsh 685 – he might be having a Derulaissance.

How Jason Derulo get the track from Jawsh 685?

According to a piece published by Variety, which we understand to be accurate, Derulo and Jawsh 685 were in talks about the use of his song when Derulo “went rogue” and released his song before a deal was signed off.

It’s called ‘Savage Love’, and if you haven’t heard it, that’s probably because it keep disappearing. It’s not on Spotify, and not on Derulo’s official YouTube channel. Like ‘Swalla’, ‘Trumpets’ and ‘Whatcha Say’ before it, it’s the kind of song you’ll listen to now and then never actively think about again, until you realise it’s somehow September and it’s been stuck in your head for a full four months. Don’t say we didn’t warn you.

Where the confusion (and suspicion) arose is in the bouncy reggae-tinged beat that underpins it – as basically anyone with a TikTok account would’ve instantly recognised it’s built pretty much entirely on Jawsh 685’s surprise smash hit ‘Laxed (Siren Beat)’.

Close your eyes and hit the “play” button. Does this song sound like something you heard once, in the distance, on the wind, kind of warbly, maybe driving past your house at 1am? That’s because siren beats – or siren jams – are songs most often heard via the Doppler effect. They’re most often inspired by reggae and dembow music, and – as the name suggests – are generally designed to be played via siren speakers (usually attached to cars or bikes).

BRB, urgently rewiring my car’s stereo system. Apart from every time I leave the house, though, where else might I have I heard ‘Laxed’?

It has nine million views on YouTube and eight million plays on Spotify, so it could have just come up in your music rotation. However, if you’re among the growing number of devotees to social video platform TikTok, you’ve probably seen the culture dance trend.

The culture dance is a TikTok trend set to Jawsh’s track, wherein users change into their traditional cultural dress as the beat changes. It’s fitting given that Jawsh 685’s own name is a shout-out to his Samoan heritage; 685 is the country’s calling code.

Why does it matter that another Aucklander blew up on TikTok?

TikTok is the new frontier. Benee’s got two international hits with its help, Lil Nas X got a record deal because of it, and influencers like Jack Innanen are forgoing Instagram completely and instead providing sponsored ads in the form of 60-second one-man sketches on TikTok.

In music, nothing is original; but on TikTok, everything is counted. We know ‘Laxed (Siren Beat)’ has been used more than 35 million times on the app, and that Jason Derulo has done the dance, albeit without any cultural context (do not view if you’re of a weak constitution). When he did it, the name of the song and the artist – Jawsh 685 – were clearly visible. Derulo’s not hiding anything.

When Justin Bieber created a YouTube account in 2007, it took a year of Usher and Ne-Yo covers before he got picked up by a label. Jawsh 685 only has one song on TikTok, YouTube and Spotify – and it’s only been there for nine months. He’s already sampled and signed.

This story has been updated from an earlier version to clarify details around the sampling of the song.