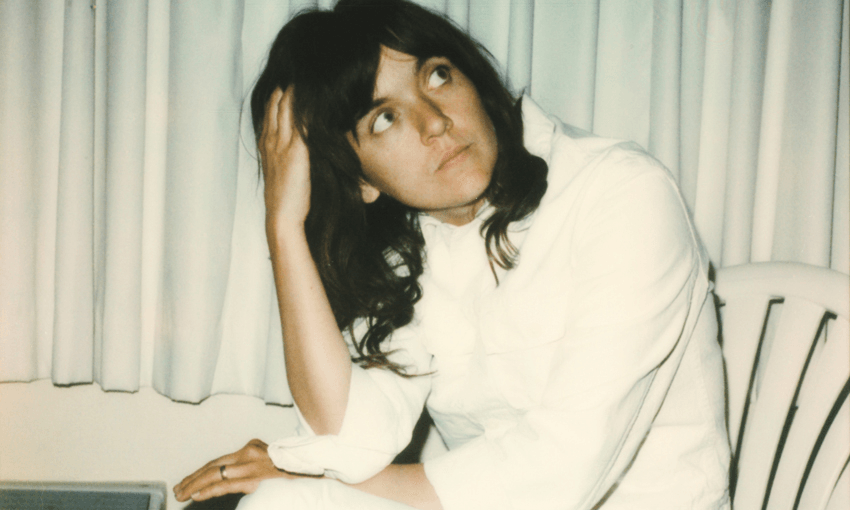 Courtney Barnett wants you to tell her how you really feel

After touring the world and releasing an album with Kurt Vile last year, Australian singer-songwriter Courtney Barnett is back with her second solo release, trading wry and acerbic for something a little more earnest.

Courtney Barnett wants you to tell her how you really feel – so much so that she’s dedicated her entire website (and title of her new album) to doing just that. For the most part, her fans have willingly obliged, pouring some of their deepest, darkest secrets onto the website for the world to see: “I feel used and abused”, “I feel like I’m in over my head”, “I feel depressed and anxious, “I feel like a piece of shit”.

Others, however, are a bit more hopeful. One person writes how they’re “happy that the sun is out” and how that brings quiet to the back streets, while others gush about feeling excited, warm, psyched, loved, hopeful, grateful, relaxed, and free. Ultimately, it’s this positivity Barnett wants to tap into, describing her call for submissions as a type of social experiment.

“Seeing so much negative stuff in the world and media, there was this oversaturation of negativity and I just wanted to try and sense if that [was real] or just the louder voice,” she says. “I think I just had faith there was a lot more love and warmth in the world than there was hatred. I’ve gone through some of them and they’re just really beautiful and optimistic.”

Surprisingly enough, “optimistic” is also how Barnett describes how she felt in the wake of writing Tell Me How You Really Feel, her sophomore album about loneliness (‘City Looks Pretty’), anxiety (‘Crippling Self-Doubt and a General Lack of Confidence’), misogyny (‘Nameless, Faceless’) and emotional burnout (‘Need A Little Time’). Speaking from her Melbourne home ahead of starting her worldwide tour – which includes two dates in New Zealand later in the year – the 30-year-old Aussie songwriter says much of that comes down to the fact that it’s allowed her to recognise (and rectify) some of the negative thoughts permeating her life. “I think facing those feelings and being truthful about them [really helped],” she says. “All those things are good to think about.”

Compared to her 2015 debut album, Sometimes I Sit and Think, and Sometimes I Just Sit, Barnett’s second solo release is less wry, more heartfelt; less acerbic, more introspective. Even the album’s title – which can easily come across as jibing and sarcastic – actually comes from a place of earnestness. “It also comes from people in my life mentioning it to me… In a way, we’re oversaturated with platforms to tell people how we feel but it’s hard to say.”

So, does that mean she doesn’t think people express themselves authentically? “I can only really speak for myself and I know that I don’t. I’m pretty guarded at communicating, [but music is] definitely where I feel the most eloquent and everything seems to make a lot of sense.”

“[This album] is different, but it just kind of naturally came out that way. I was writing so much – not really songs, just writing – and I ended up turning inwards a bit more. The more I wrote, the more I saw these common ideas [around] communication, connection…and just questioning purpose.”

The new album is also different on a surface level with Barnett’s hand-drawn artwork marking a noticeable absence. “In the past, I’d just been drawing a lot in tandem with writing and it was kind of part of the process of expressing these little stories, thoughts or ideas,” she says.

“But this time, I just hadn’t really been drawing much at all [but I was] taking lots of photos and documenting stuff. When I was recording the album, I was doing a kind of self-portrait series on this Polaroid I had and when I was doing the artwork I found one of them and it just really stood out. It’s such a slightly strange and imperfect photo. It’s got a bit of an awkward crop and it’s a bit too close. I thought it was perfect for the title and it just seemed to capture the album successfully.”

Written over a long period of time, Barnett says some songs on the album date back years ago with fresh lyrics overlaid. Others, like ‘Need A Little Time’, came quickly and all at once. She recalls how she and her partner – fellow Australian singer-songwriter Jen Cloher – drove out of town one day to see a friend’s band play, staying in an AirBnB caravan at the back of someone’s property. “I was just playing guitar as the sun was setting and the song just came almost fully formed,” she says. “That never happens to me. It always takes me so long to write a song. It was like it was just sitting there waiting to be written. It’s a bit of a mystery that song.”

Since the critical success of her debut three years ago, Barnett’s been thrust into the spotlight, a position she’s occupied with relative unease. It’s a lot for someone who wears their awkwardness and anxiety on their sleeve to deal with, at once both a relatable human trait and crippling social barrier. But “being at peace with it is a better way of dealing with it,” she says. “Just understanding that it comes from a place of fear or wherever, you can kind of manage and try and live past it instead of ignoring it.”

Facing up to one’s emotions is ultimately what Tell Me How You Really Feel is trying to achieve, both for the songwriter herself and the fans that respond to it.“I guess it’s weird but it’s also not that weird?”, she says about the personal nature of her music. “I can never really decide. There’s so much music to listen to in the world, so I feel like if people care enough to even give these songs a listen, they’re the kind of people who are understanding of the thought in the first place. So I feel kind of okay about it. I feel kind of safe.”