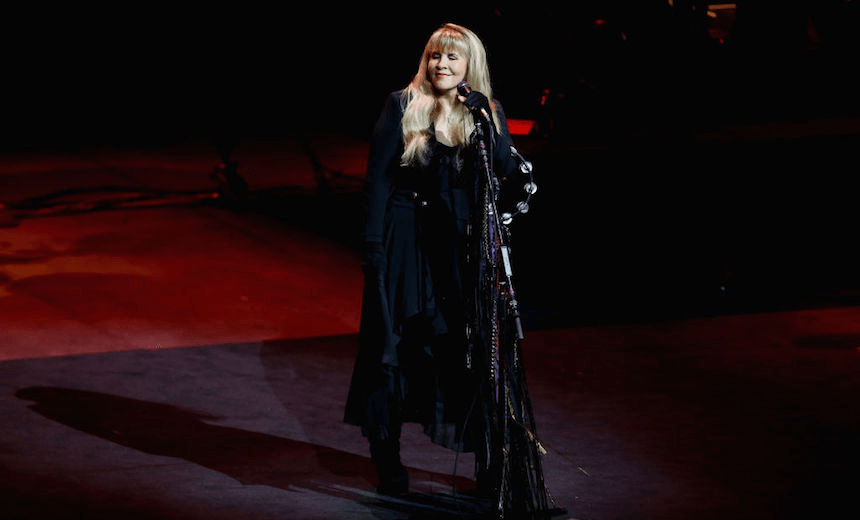 Stevie Nicks played at Auckland’s Spark Arena last night, with The Pretenders as special guests. Sam Brooks was there.

I saw Blondie and Cyndi Lauper early this year, and there’s something special about seeing these vanguards of music do a victory lap. All the things that made them unique, made them famous, made them successes are still there. They’ve still got boatloads of charisma, they’ve still the voices that make them stand out from the pack (not necessarily the most powerful or flawless voices in the business, but voices that become more familiar to you than some of your friends and family) and they’ve now got the back catalogue of songs that they could play for an entire day and you wouldn’t get bored.

These shows are special for that reason, but also because you get to buy into a community of people who love these artists. God knows where else I’m going to see that many middle-aged women (a valuable and necessary demographic, perhaps my favourite demographic) singing their wine-soaked hearts out. You get to be with thousands of other people who love that guitar riff in ‘Edge of Seventeen’ as much as you do, which is a lot, because it’s one of the best riffs in music.

But instead I want to talk about Stevie Nicks, aged 68, singing ‘Landslide’.

I didn’t think she was going to do ‘Landslide’. I’d forgotten about it, and she hadn’t done a huge amount of Fleetwood Mac material until that point (although a previous highlight of the whole thing was a medley of ‘Gypsy’ and ‘Dreams’). ‘Landslide’ is one of those songs that you listen to each year and you understand it a little bit more. It’ll pop up on your shuffle and it’ll push lightly against your chest and go, “Yeah? Remember me? Remember these feelings? You’ve still got them.”

But then she did ‘Landslide’ live and I lost my shit. I was pretending not to cry, but failing at it. I did the quick wipes of your eyes. If I had sunglasses on me, I would’ve put them on to prevent people from seeing me cry, which is a tactic I learned in my insane tear-stained youth.

I don’t know what it is about ‘Landslide’. It shouldn’t work as well as it does as a song. It’s very simple, the imagery is not complex and not particularly unique. You can imagine it written down as a poem and being fairly unspectacular (Nicks talked a lot throughout the night about many of her songs being poems first, and ‘Landslide’ is one of those songs where you can absolutely see that). It’s a song that was ostensibly written for, and about her father, and the dimming relationship between them.

And last night? Seeing a woman in her late sixties, who has lived even more of a life, who has lived through many seasons of her life, sing the lyrics, “I’m getting older too” killed me. I’m not going to go into some crap about the power of music, we all know it’s powerful, we’ve all heard the song ‘My Humps’. We all know music has crept inside us in a terrifying and limited way.

But hearing her sing that song live, many decades into her career, made me believe in the longevity of a star. And Stevie Nicks, with her Belladonna cape and her completely inaudible tambourine shakes, is a star. When that star sings ‘Landslide’, you become a little bit more human, because she makes you feel more human.