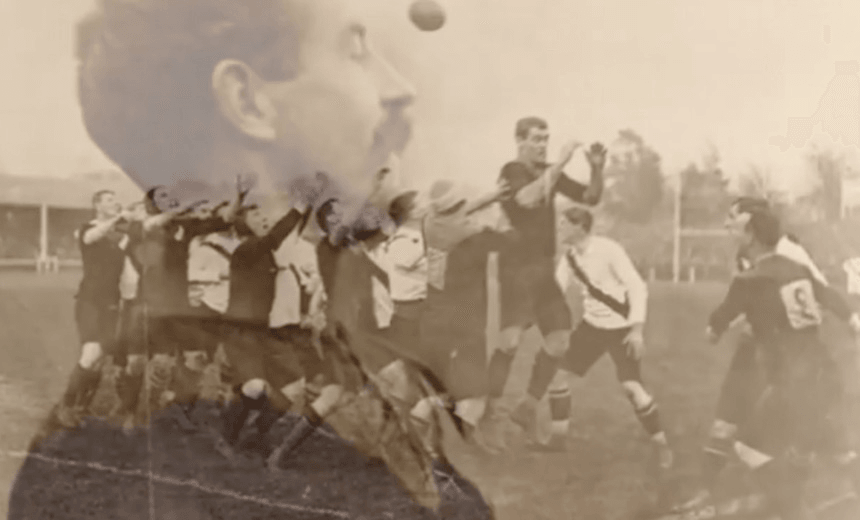 All black everything: A new song for the All Blacks

Gareth Shute delved into the history of All Blacks songs, found them wanting, so wrote his own.

New Zealand is a rugby-mad nation but, despite many attempts, there has yet to be a song written for our national team that’s had any staying power. But how hard could it be to write a song about the All Blacks? Given the team is playing against The Lions this weekend, I thought I’d put vainglory before common sense and have a go myself…

From the start, I decided that I wouldn’t just do a parody song – that’d be an easy cop-out and wouldn’t really get at the trickiness of writing a sports song. I’d rather make a serious attempt and have it be an embarrassing failure than just go through the whole process sarcastically. Being specific about the subject matter also seemed important, unlike sports songs like New Order’s ‘World In Motion’ which are pretty vague (though the subject matter becomes clearer during the clunky rap by left winger, John Barnes).

The first two songs about the All Blacks that came to mind were ones written to protest tours of South Africa – ‘My Old Man’s An All Black’ by the Howard Morrison Quartet and ‘Don’t Go’ sung by Don McGlashan, Chris Knox, Herbs, etc. Not much help as inspiration!

A more sensible starting point is ‘Can You Hear Us’ by our most successful pop songwriter, Neil Finn. It was released in the lead-up to the 1999 Rugby World Cup, along with a stirring black-and-white music video showing an average New Zealand family sitting down to watch the game on television, but with a bunch of old All Blacks and Lucy Lawless.

It’s a classic Finn melody, emotively amped up by having older brother Tim on harmonies. No surprise that it grabbed the No.1 spot on the charts when first released, even if its chart life was very short. In retrospect, it does seem weirdly melancholic given that it’s about a brutal game like rugby. Certainly it’s too much of a downer for a rugby crowd to sing in the stands (in that sense, it’s similar to Tim Finn’s earlier song about cricket, ‘Runs In The Family’).

Its mood reminds me of the football song, ‘Three Lions’, by the Lightning Seeds, which addressed the decades of failure that had greeted England’s teams at the FIFA World Cup (despite being the country that invented football). I suppose our own rugby team was similarly downcast in 1999, but yearning doesn’t seem like an applicable emotion now that we’ve won two Rugby World Cups in a row. We need a song for a team that’s on top – more akin to ‘We Are The Champions’ by Queen. Scribe struck a better tone on his track, ‘All Black Everything,’ though the cost of clearing the Jay Z sample surely made it a non-starter as an official single:

Scribe wrote the track in the lead-up to the 2011 World Cup which was held here in New Zealand. The official ad campaign featured a cover of ‘Right Here, Right Now’ by The Feelers and many felt disappointed that a local composition wasn’t used. In response, some songwriters had a go themselves, leading to heartfelt numbers like Nickelback-esque ‘We Are One’ by Franko (237k views on Youtube) and the folky ‘Men In Black’ by the Canz (which has the benefit of giving a clear nod to the Ka Mate haka). But if I wanted earnest lyrics and strummed acoustic guitar then I’d just get behind the Neil Finn song, which easily buries these two.

Before the 2015 World Cup, Taika Waititi brought together a host of celebrities for a charity single and supporters’ song, ‘Team Ball Player Thing.’ Lorde was there, Jason from Op-shop, Broods, and both singers from Naked and Famous (funnily enough Alisa Xayalith’s brother, Aroon, had already written his own supporters song, ‘We Wear Black’ by DisOrder). The schtick of Taika’s song was that the lyrics were written by children (since it was for Cure Kids), though Flight of the Conchords did a funnier version of the same idea for the same organisation back in 2012. New Zealand does have a proud tradition of the celebrity singalong sports song, which stretches back to ‘Sailing Away’ (written to the tune of Pokarekare for the 1984 America’s Cup). Unfortunately I don’t know enough famous people to get such a project off the ground.

It’s not worth going too much further back into the history of rugby songs in New Zealand (Audioculture already has an in-depth piece) but while we’re discussing the 80s, I should mention ‘Give ‘Em A Taste Of Kiwi’ by Murray Grindlay (written for an All Blacks campaign in 1980). Grindlay originally played heavy blues rock (in bands like the Underdogs), but by the 80s was recreating himself as a king of jingles (‘Great Crunchie Train Robbery’), pop tunes (‘Shoop Shoop Diddy Wop’), and movie soundtracks (Sleeping Dogs and Once Were Warriors). His All Blacks song might’ve seemed schlocky at the time, but it’s catchy and a lot of fun:

Out of all the songs listed above, the Scribe one seems the most useful as a starting point. It’s got a bit of aggression like rugby itself and it also has the merit of just repeating ‘All Black’ over and over. I’m absolutely terrible at rapping, but I figured I could get this vibe by doing the vocals in the style of a chant (thereby also tapping some of the spirit of Te Rauparaha’s ‘Ka Mate’ haka, which the All Blacks have delivered with mana ever since the days of Buck Shelford).

Scribe names a bunch of current All Blacks in his verses which has the downside of making his track dated, so I decided to just do a verse where I name some classic ones. The other verse will be more generic ‘we’re the best’ claims (similar to ‘Give ‘Em A Taste’). So let me finally bite the bullet and present this song I wrote … I’ll save all my excuses until after you’ve heard it …

Hmm … Not quite right, is it? The brevity could easily be fixed by adding a bridge or guitar solo and I could replace my weak vocals by bringing in a better singer. For this demo, even the backing vocals were just me alone, though they were recorded using the old studio technique of doing multiple passes of the backing vocals at different recording speeds (thus changing the texture of each vocal take when they were played together at normal speed).

However, it’s really the songwriting that I’m interested in and I think I fell short on that score too. The verses had to be speedy to make the Bo Diddley-esque rhythm work, but this means the chant in the chorus is too fast for an easy crowd-singalong. I purposefully wanted the lyrics to be straightforward, but it’s awkward trying to make boosterism sound natural while also choosing words with the right syllables to fall correctly over the rhythm (the closer you get to rap, the more important this becomes).

If nothing else, I feel like I’ve shown why writing a song for the All Blacks is a tricky task. I’m not emotionally invested in this song, so do come on Facebook and mock it all you like! Or make the case for one of the other songs above and maybe we can bring one back for the current season.

Tune in tomorrow for the story behind New Zealand’s greatest sports song (it’s not any of the ones you’re probably thinking of).