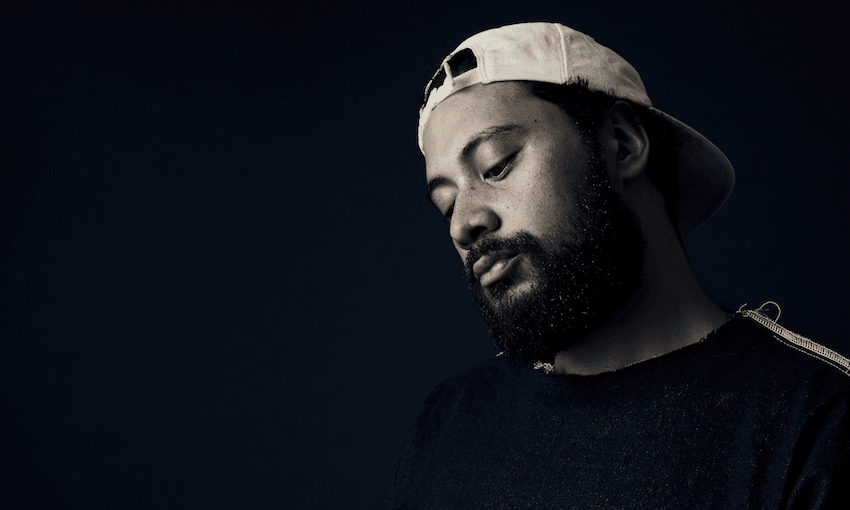 How Noah Slee’s new album saved him from himself

By Martyn Pepperell
Contributor
Made possible by

Berlin-based Tongan-New Zealand musician Noah Slee talks to Martyn Pepperell ahead of his appearance at Laneway Festival next week.

“It’s great when people pick up on certain lines in my songs,” says Noah Slee. The singer/songwriter, multi-instrumentalist and electronic music producer is telling me how the relationship between his audience and his music has intensified since the August release of his debut album Otherland. “I see people singing along on their Instagram stories,” he enthuses, “they tag me in their videos. It’s entertaining and it feels very nice. Instagram stories are hilarious. They’re such an interesting insight into someone’s life, especially when they are a little bit lit and let it all go.”

What can also be an interesting insight into someone’s life – especially when they’re an artist, are a little bit lit, and let it all go – is the art they create, and how they talk about it. Today, we’re discussing what Slee did when he decamped to his producer Ben Esser’s lakeside family home in the German countryside halfway between Berlin and Hamburg, how he ended up there, and what came next. With no distractions, they turned several years’ worth of rough demos into finished songs, tracked some additional recordings at Red Bull Studios Berlin, and created Otherland, the most personal and honest artistic statement of Slee’s career. “In the past, I’d always disguised myself in my music,” he admits. “Now that we’re in the post-release phase and I’m writing again, I feel like Otherland is only the tip of the iceberg in terms of me being free and open. I’m glad I did it though because it’s opened up the door for me to really go in with music.”

The first time I saw Slee perform live was at Auckland’s Wine Cellar in 2013. Dressed in vintage denim, with frizzy hair peeking out from under a pork-pie hat, and surrounded by guitars, pedals, keyboards and live electronic music performance interfaces, he performed with two session musicians, presenting some spectral, almost ambient songcraft. Equally informed by neo-soul, future RnB and experimental indie rock and folk, his sound had a distinctly Pacific twist. It silenced the whole room. As the music ebbed and flowed around Slee’s soul and gospel-informed vocals, it became obvious we were witnessing something special.

Although Slee grew up in Auckland, he’d spent the previous four years living in Brisbane, travelling through the US, UK, Europe, and the South Pacific, expanding his creative palette and perspective along the way. Music wasn’t new to him either. Slee got his start in the early-2000s singing with West Auckland pop-funk band Spacifix, memorable to many from their 2006 Top 20 hit ‘Sunshine Day’ and numerous televised performances. At the time many thought Spacifix might become an international success, but despite a degree of recognition overseas, things didn’t pan out.

“That was so long ago,” Slee reflects. “It feels like a whole different world and time, and like I was a whole different person. There was a lot that happened before we ended that turned me sour against music and the music industry. It’s only recently that I’ve been able to fall in love with what we did again. I tried to distance myself from it at first. When I did music again, I wanted to veer as far away from what we did as possible. That let me really explore.” That exploring time was crucial to his development as a solo artist, a process that began in Australia and continued when he relocated to Berlin.

With Otherland, Slee and Esser crafted an album underpinned by Slee’s younger experiences and the adventures that would follow. Rendered in sounds borrowed from his beloved Neo soul, the Future R&B sound that’s gained popularity in recent years, and the euphoric house and techno music he was introduced to in Berlin, it’s a record that hits you in the hips and the heart. Although Otherland features a cast including Hiatus Kaiyote’s Simon Mavin and Paul Bender, American future-soul icon Georgia Anne Muldrow, Nigerian singer Wayne Snow, and New Zealanders Melodownz, Rachel Fraser, and Jordan Rakei, top billing belongs to Slee and his exquisite vocals. They’re the vehicle for his introspective lyrical explorations of the stories behind his late sexual awakening, journey of self-discovery, and the freedom and spiritual progression hanging it all on the line has afforded him.

In August last year, I attended a club night Slee had curated at a back alley bar in Berlin’s artsy Kreuzberg district. Braided Bone Thugs-N-Harmony loving Auckland rapper Melodownz and several prominent Australian future RnB musicians were touring through Europe at the time. Having spent time living on both sides of the Tasman, Slee had to put on for his people, and an appreciative crowd showed out. I saw him briefly on the night, and he gave me a warm hug. Although I wasn’t yet privy to what had gone on, I could sense a weight had been from his shoulders.

Slee was raised in a predominantly Christian community. He’d been aware he was gay since his early teens, but it took the move to Berlin for him to feel comfortable expressing who he was. “I couldn’t really be myself in New Zealand or Australia,” he admits. “I always told my friends and family I was moving to Berlin to pursue music, but really, I needed to find a community that wasn’t just musical, but was open to my sexuality and able to let me breathe. Music was a drive, but in my mind and heart, I wanted to find someone, and not feel judged or uncomfortable.”

When he explains the sequence of events that led him to Otherland, it’s the definition of a bittersweet story. “I had quite a big breakup,” he reflects. “Actually, it was with my first partner, my first real partner. Things turned sour, and he moved back to Munich. It was a beautiful relationship, and I don’t regret any of it, but it got quite toxic. We were going out for these crazy long Berlin nights, and we only really knew each other on that level. It was all new to me; I was this kid from New Zealand, being exposed to this huge electronic music scene people lose themselves in.”

Post-breakup, depression and health issues led Slee towards a dark place. One of his childhood friends in New Zealand died and, unable to afford to head home for the funeral, he consoled himself with drugs and alcohol. One of his brothers plays rugby professionally in Lyon, France’s third largest city. When things got particularly grim, Slee gave him a call. “I told him I was suffering and I couldn’t remember the last time I was sober,” he admits. “He put me on the next plane to Lyon, and I spent the next month hanging out with him and regrouping.”

Near the end of the month, Esser and some of his friends from Berlin visited for a few days to see how he was getting on. When they started talking, Slee realised how important it was that he completed an album. They made plans to head to Esser’s family home, and three months later, Otherland was done. “I needed to write this music and finish the album for myself,” he says. “It was my way of bouncing back.”

To put Otherland out, Slee partnered up with Australia’s Wondercore Island and Germany’s Majestic Casual Records. Si Jay Gould from Wondercore Island had been a friend for a few years. He helped Slee secure some of the featured artists on the album, and create a gorgeous music video for his single ‘Radar’. “Si had a dope vision, and he threw names at me that really tripped me out,” he says.

In the lead up to Otherland’s release, Slee’s singles started picking up traction online. He began popping up on crucial music and culture websites like Complex, Earmilk, Noisey, Nylon, Mixmag, Indieshuffle, and Boiler Room TV. US and UK radio stations like KCRW and BBC Radio 1Xtra showed love, and he went on European tours with cult rappers Angel Haze and Mick Jenkins, picking up festivals slot along the way. “2017 was the year for me,” Slee enthuses. “Releasing the album, touring it, and people singing the songs at shows was special.” He pauses before continuing with a chuckle. Sometimes the crowd has the whole hook covered for me, and I can just do some ad libs.”

On Auckland Anniversary Day, Slee’s going to find out how covered the audience has him here in New Zealand when he makes an anticipated appearance at St Jerome’s Laneway Festival in the Albert Park precinct. “The last few years have been intense, but they’ve put so much into perspective,” he reflects. “I’m looking forward to getting amongst it when I’m back for Laneway.”