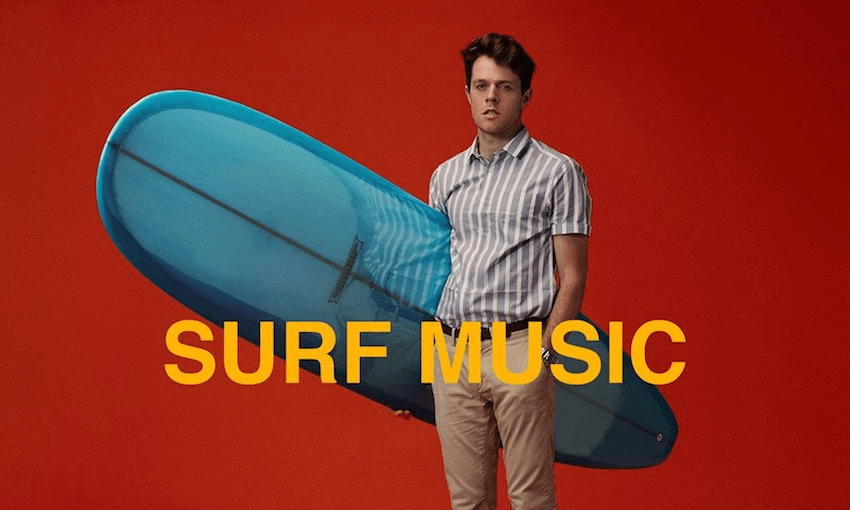 On the very specific greatness of Paul Williams’ debut album

By Reilly Hodson
Guest writer
Made possible by

I can’t remember how I first found out about Paul Williams. He doesn’t know me, but I’ve been following his work for at least a year. My fascination with him started with his excellent, Billy T Award-nominated, Comedy Festival show. As a theatre guy who came from a privileged, white background, it was a show that lined up with my sensibilities in a unique and enjoyable way. Because Williams is like me, except he has a greater array of talents. He has an excellent basketball podcast Advanced Analytics with his more-famous brother Guy, his social media content is unique, he wrote some brilliant stings for The Spinoff’s Real Pod, his Max Key impersonation is second to none, and almost every good Comedy Festival poster is designed by him. He’s a polymath, a modern-day Renaissance Man, and all that finds a way into his music.

This album, Surf Music, came out of nowhere on Thursday night. A post on his Instagram story and a tweet were the only indications that it even existed (and it took me a while to find it because he doesn’t have a particularly unique name for a musician). Williams has made music for a while, and he has some brilliant YouTube videos that I highly recommend if you enjoy this album.

Surf Music takes all of the specific things about Williams – his background, his interests, his musical talent – and tells a partially basketball-inspired love story with a mastery that is surprising and delightful. It’s not, as some might expect, a comedy album, but it is funny. Sometimes. Williams can do comedic music, as he showed in his comedy show, but that’s not what he’s trying for here. Surf Music is an excellent, earnest piece of pop music that feels individual and unique. It’s funny because Williams is funny, not because it needs to be – in the same way a dramatic movie can have funny moments because the characters have good senses of humour.

It opens with a banger title song which is a mostly straightforward summer track, the kind of tune that makes you want to wind down the windows and sing at the top of your lungs, then get out of the car and dance until your legs hurt. Beautiful, classic synths and a pulsing beat, crystal clear falsetto harmonies floating over it all.

Once you’re warmed up with that, he introduces the love story that’ll weave through the rest of the album. He sings that he wants to be the ‘Number One’ of whoever it is that he’s singing to, just like Anthony Bennett. This choice of metaphor is an interesting one, and it defines the most fascinating parts of this album. For context, Anthony Bennett was the first overall draft pick in the 2013 NBA Draft, who subsequently flopped as a professional, and was put out to pasture, switching through a number of teams in trade deals, never succeeding, then eventually going to play in Turkey, before returning to the development team of the Boston Celtics. It’s a super interesting story, and it’s particularly interesting that Williams went with that as the overarching narrative of the album.

The love story comes through in ‘Braces’, a ‘Just The Way You Are’-style love song where he tells his loved one that they don’t need braces, that their imperfections are what makes them perfect; ‘Bond Themes from the Early 80s (feat. Lili Bayliss)’, a moody road trip song; ‘Clouston Bridge’, about young love in Nelson, Williams’ hometown; the heartbreaking ‘Federal Deli’, in which the relationship ends while they wait for a Reuben sandwich; and the excellent ‘Euroleague’, which sees the return of the Anthony Bennett metaphor.

This is a really affecting and romantic album, but that’s not what’s interesting about it to me. What’s fascinating is how specific it feels, with references to, variously: the NBA, Nelson geography, the Auckland restaurant that I, for the next week or so, work at (and where I’ve served Williams a few times), old movies and Paddle Pop Cyclones, sung with a distinct voice that pronounces vowels in a way that you’ve never heard before and has a ridiculously high range. It’s a masterpiece of the creative Aucklander, the type who lives on Twitter, listens to podcasts and watches basketball, who eats out at cool restaurants on their way to cool events at the Basement or whatever. It’s a group of people that I’m an aspirational member of, and that might be why I love this album so much.

Even if you aren’t that super-specific type of person, though, the album is a joy to listen to, the kind of album that the internet is supposed to allow to exist all the time but that we don’t get often enough. If you want to find me this weekend, I’ll be embarrassingly dancing alone to this all night long.