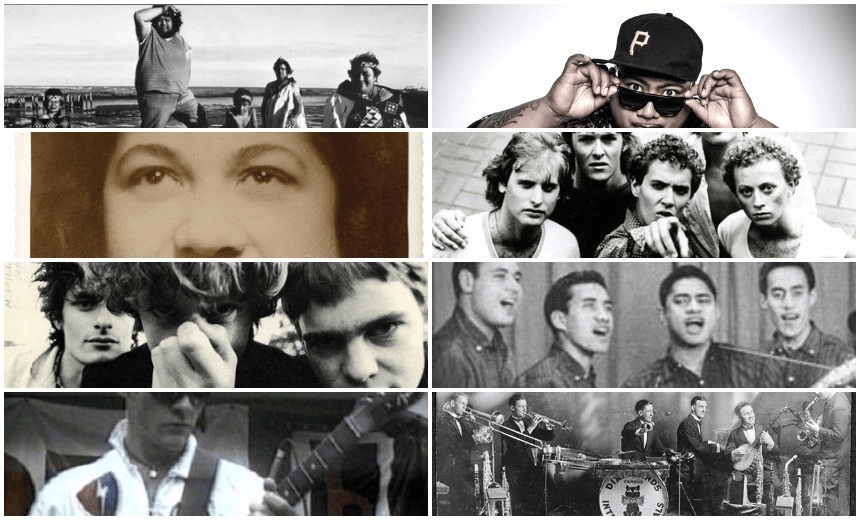 The Great New Zealand Music bracket: Which decade is best? ROUND ONE

While walking through the Volume: Making Music in Aotearoa exhibition at the Auckland Museum, Henry Oliver thought to himself: which decade had the best music? Rather than telling you his answer, he’s asking for yours.

We, as both high-functioning mammals and low-functioning music fans, love to categorise things. Years, decades, generations, eras and genres are all arbitrary fences we put around things to make them easier for us to understand, identify with, argue about, and distract us from the inevitability of our death.

While there is a chronological aspect to Volume, the exhibition does not neatly separate its content into decades. Still, as you walk through, the metric of ten years just occurs to you as a natural way to organise the material in your mind (“that t-shirt is so ‘90s!”, “that poster is so ‘60s!”, “how were the 80s so lame and so cool at the same time?”, etc.). All of which lead me, an editor at a 21st century media website, to the most 21st century media take possible: Which decade was the best?

Of course, my first thought was to do it myself. I’d make claims for various decades sprinkled with personal anecdotes about  the Split Enz songs my sister had on a mixtape otherwise filled with British music from the 60s, going to Manners Mall to buy King Kapisi’s ‘Subcranium Feeling’ cassingle on release day, the hip bands I used to go see at the dive bars around Auckland. You know the type. So rather than drag myself (and you) through my own combination of nostalgia and hatred-of-nostalgia, I throw it out to you, dear reader. Which decade was the best for New Zealand popular music?

In lieu of a personal essay, a power ranking, or an oral history, we’re using next best nu-media format: the non-sports tournament bracket! All you have to do is vote for the winner of each match-up. On Wednesday we’ll reveal which decade has won each match and proceed to the next round until, in two weeks’ time, we pronounce a winner – the definitive Best Decade Ever in New Zealand Music History.

Methodology: We’ve seeded the decades according to how many local songs made it to the top of the New Zealand Singles Chart, using Wikipedia as the information source (what has Wikipedia ever gotten wrong?). This was just a way to objectively set the bracket and should not necessarily have any impact on your vote.

If you need help deciding, here’s some non-comprehensive reminders of things that sprung to mind when I thought about how I’d vote.

Okay, this is as good as a bye. Sure, the ‘modern’ New Zealand music industry was pretty much birthed in the ‘40s with Pixie Williams’ debut single ‘Blue Smoke’, the first song written, recorded and released in Aotearoa. It was no small thing: the 78, released in 1949, sold approximately 50,000 copies. And there were probably some pretty hot nights out dancing to jazz bands, sitting in some theatre listening to the new Doug Lilburn jam, or jamming on the guitar with your mates who learnt some new songs while they were away fighting Nazis.

But the 2000s gave us the local rap boom of Dawn Raid and Dirty Records, the Mint Chicks, those Lawrence Arabia/Reduction Agents records, the emergence of Stan Walker, that ‘Sophie’ song, those Ladyhawke jams, and so much more I can’t even begin to think comprehensively about it. Yes, I was in my 20s for most of the decade so I’m generationally biased, but you can be generationally biased too and I won’t complain.

Now it gets a little interesting. Much of the quintessential Kiwi Rock that still gets major playing time on classic rock radio and nostalgia-driven TV shows was released in the ’70s. Th’ Dudes, Dragon, Hello Sailor. These rock dudes could be a major plus or a major negative depending on how you look at it. As a New Zealander who’s listened to the radio more than once, I know how hard it is to hear those songs with any kind of objectivity. They’re so heavy with cultural meaning in this country that you can’t hear ‘Be Mine Tonight’ without having heard it a million times and considering the meaning of Dave Dobbyn and the New Zealand Culture that sprung forth. Ditto with Split Enz, though I think they made much better albums than the aforementioned and, therefore, have a wealth of quality material that isn’t annoyingly etched onto your brain. But of course, there was also The Human Instinct, Shona Laing and Sharon O’Neil, The Scavengers and Toy Love and AK79. All good things, all good things.

Then there’s now. The 2010s or the teens or whatever you want to call them. The present! And the near future! An unfinished decade of huge international hits (you know who) and a bunch of people following in the slipstream (or trying to). There’s been a resurgence in folky women with acoustic guitars (Tiny Ruins, Aldous Harding, Nadia Reid), brothers making backward- and forward-looking psychedelic music on the other sides of the world (UMO and Silicon), rappers from last decade coming into their own (David Dallas) and new voices coming up (SWIDT). Aaradhna! Oh, and ‘Young Blood’ too, that was a great song.

By most accounts, what we think of as The Sixties didn’t really start until 1963 when someone (not saying who) assassinated JFK. And considering our distance from the cultural centres of the Western world and how slow international shipping was back then, the ‘60s didn’t really hit New Zealand until at least a year later. So much of what sounds like ’60s music didn’t really hit until the very early 70s. Of course there was classic entertainer Howard Morrison; dance bands like the Quin Tikis; Ray Columbus, who brought the Beatles’ “Yeah, yeah, yeah” downunder; and, late in the decade, APRA’s best local song ever, ‘Nature’ by The Fourmyula.

This is pretty much another bye. There was a lot of post-war American influenced music around in the ’50s – Hawaiian, country, smooth crooners and jazz bands. But nothing remarkable. No records that you have stored in your head as representative of this nation.

But the ‘90s! The ‘90s were the start of a concentrated effort to get New Zealanders listening to New Zealand music. And that there was amazing music didn’t hurt. I honestly don’t know where to start: ‘Jesus I was Evil’, Bic Runga, ‘Chains’, Killjoy, 3 The Hard Way, a whole bunch more Flying Nun (and related) stuff, all sorts of noisey and weird music on 50-copy runs of cassettes (Ghidrah!). So ’90s. So good. So back right now.

So… What else do you need? VOTE!