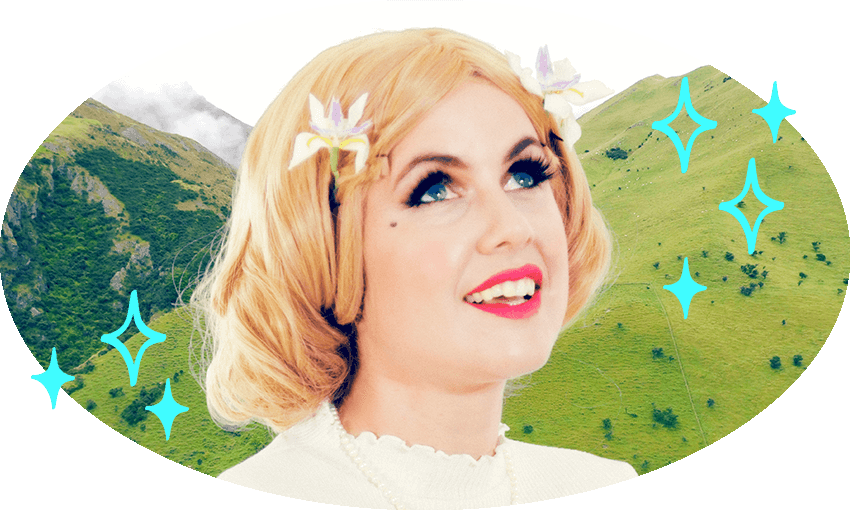 Gabi Lardies chats making records and constructing images with the Auckland musician, whose new single ‘Everything is Going To Be Alright’ is out today.

“It started off as a joke,” Chelsea Nikkel says of her stage name Princess Chelsea. “They were being sarcastic, because when we were on tour I was often looking really disheveled, and they would joke that I was a princess.”

Apparently she looked “kinda like this”. Wearing a 1990s era All Blacks jersey, she leans back, pushes her hand through short, black hair and gestures down at the loose, black, proudly Kiwi garb. She is in her home studio; on the wall two synthesizers and a microphone lean on a shelf, and another mic leans towards her from its clamp on her desk. “They were teasing because I was the opposite of [a princess].”

It was almost 15 years ago that her bandmates from Auckland’s Teen Wolf came up with Nikkel’s nickname. Since then, she has released four albums, an E.P, and 11 singles under the name. Today she releases a new single and video, ‘Everything is Going To Be Alright’. The song is the title of her upcoming long-playing record, which she affectionately terms a “nervous breakdown” album.

So does that mean it’s yet another dark, gloomy and brooding lockdown record? Not at all. “It’s a positive album,” she says. “I wanted to do it the other way. A lot of people are going through a tough time – there’s a pandemic, it’s all a bit scary – so hopefully it will be a comforting album.” But it wouldn’t be a Princess Chelsea record if it was simply a bop. Her music has previously been described as “ravishingly strange”, “magical yet menacing” and “sweeter than peach pie… injecting a pure shot of cynicism”. Everything is Going To Be Alright is, in her own words, “a little bit creepy, a little bit tense”.

In the accompanying video, as airy synths are punctured by thudding guitar, sheep trot on an almost acid-green hill. Superimposed on the scene is Nikkel, wearing a blonde wig studded with flowers, fake eyelashes and pink lipstick. At one point she turns her gaze towards the camera, makes eye contact with the viewer, and smiles.

“Eye contact really freaks people out,” Nikkel says of that disquieting moment. But the creepiness of the video goes beyond that one glance. The pastoral imagery of ‘Everything is Going To Be Alright’ is reminiscent of the Skeptics’ infamous 1987 music video for ‘AFFCO’, which opens with two sheep nibbling on grass and proceeds to follow them into the abattoir. Director Stuart Page made that video “to document the ‘process’ of a sheep’s life in contemporary New Zealand”, and didn’t hold back on the violent nature of this “process”. Thirty-five years after Skeptics lead singer David d’Ath screamed “We are the meat workers”, I suspect I see some of the same caustic, sarcastic patriotism in the embroidered Canterbury and Silver Fern logos adorning either side of Nikkel’s chest.

She admits she may have been “somehow channeling” the AFFCO video when she made ‘Everything is Going To Be Alright’. After all, there are some “scared sheep” in her video too. “The funny thing is, when I got funding for the next single… I was thinking ‘who should I get to make the video?’ and I thought, ‘what about the person that made [‘AFFCO’]?’” Page will be directing her next video, which is being shot on Monday.

When Nikkel posted a teaser of ‘Everything is Going To Be Alright’ to Instagram, fans were “already obsessed”. Since the release of her first album Lil’ Golden Book 11 years ago, Nikkel has built a loyal following, both here and around the world. “The cool thing about being a cult artist, is that your popularity, if you keep going – and keep being good,” she laughs, “just gradually goes up.” As in the video, she looks back at her fans. “I recognise a lot of them now, on social media, and I’m like ‘oh there’s that French guy Julien, who’s been following me for 10 years.’ It’s quite sweet, they’re really, really intense fans. It’s real cool.”

It’s not just her music they’re invested in. Under the same post one fan commented “You’re so cute 😍😘” to which Nikkel replied, “disgustingly on purpose here hahah”. A femme style, where the aesthetic labour of appearance is obvious, can conjure superficiality, prissiness, brattiness and childish entitlement – much like the term “princess”. But, just as she does with her shimmery pop, Nikkel complicates this image. The @wonderfulprincesschelsea profile is a mix of dolled up portraits – Nikkel dressed in a pink lace gown, wearing a floral head-piece and a full face of makeup  – and shots of her in cheap-looking track pants, with a shaved head, sitting on a massive pile of rubbish bags.

“I do like to mess around with image,” she tells me, “I love dressing up – it’s fun.” Like the brightness of her signature sound, the dual image is also “a tool for emphasising things in a way that’s creepy”. While some people’s reaction may be “Oh it’s some happy princess girl, fuck that” they’re not looking, or listening, properly, she suggests. Hers is a sickly sweetness, a tongue-in-cheek embrace of femininity, accompanying a creative output that is certainly not frivolous. Nikkel cites US musician Jonathan Richman as a hero for his ability to approach serious topics sincerely while remaining “really happy, cute and fun”. And after all: “you shouldn’t care about the opinions of people who don’t really listen.”

Coming four years after her last album The Loneliest Girl, Nikkel’s concept for Everything is Going To Be Alright was to involve more people. She has an amazing live band, and tells me she thought, “I’ve gotta get some of that action on my album!” The single, and album, mark a significant musical development. “I think it sounds real different, ‘cause it’s my ‘guitar’ album.” But of course it’s all relative – “there’s still heaps of keyboards”. Along with gathering a cult following, the longevity of the Princess Chelsea musical project has allowed a refinement of her sound. “The more you do something, you refine everything a bit more, so you have less going on but each thing is more important.”

Other than the challenges involved in recording other musicians during lockdown, she says the long periods of isolation didn’t affect her too much. She kept writing, recording and producing in her home studio and “got real awesome at getting up and working all day every day.” Having been a musician most of her life, she doesn’t wait for moments of genius to come to her – she sits down and works, knowing that ideas come from the process of working, and so too do moments of inspiration. “You have to go down that rabbit hole, you can’t just wait to fall into it, you have to crawl down there.”

With the album set for a September release, Nikkel plans to release singles every couple of months until then. We’ve got “basically a year of princess music” to look forward to, she says. Lucky us.